The culture of blood donation

Blood donation and transfusion in Pakistan are mostly demand-driven. With blood safety reforms in place, measures need to be taken to strengthen public trust in the prevalent methods 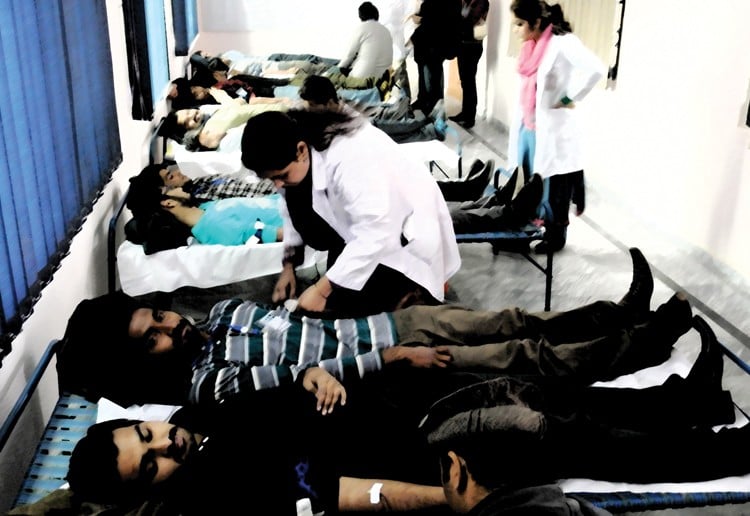 For patients suffering from life-threatening conditions as well as those under maternal and prenatal care, blood is a vital resource. Pakistan has an additional burden because of a high number of thalassemia patients. This challenge is magnified due to a lack of blood donors. According to recent estimates, only 28 out of 10,000 people donate blood. Out of these, only 11 percent of the donations are by people who don’t have a friend or family in immediate need.

Blood donation and transfusion in Pakistan are mostly demand-driven. When blood is needed, family and friends are mobilised. In general, upscale and medium-size hospitals have their own blood banks to cater to their patients’ needs. There are some private blood banks but they offer varying standards of quality. For smaller cities and rural areas, the options are limited. A majority of tehsil and district headquarters hospitals do not have blood banks. Families of patients mostly procure blood from blood banks outside of these areas. In most cases, it is transported without maintaining a cold chain. Some blood banks are also being operated by NGOs, mostly to cater to thalassemia and/or cancer patients.

"We were mostly catering to patients of hemophilia and thalassemia," says Ayesha, former employee of a blood bank organised by a welfare trust. "The number of patients was not very high, but these patients required blood thrice a week so they visited the blood bank frequently. We always had surplus blood that was either provided to other organisations or to patients. Blood was provided free of cost; people were requested to donate as per their resources."

"Stories of blood being sold for profits have been circulating the media," she adds. "I recall that standards were not maintained consistently… I was involved with blood camps. The staff used to collect blood without screening. After screening, a few cases of blood containing infectious diseases were identified, and the blood was wasted."

In Pakistan, misconceptions about blood donation contribute to low donor interest. According to Dr Fauzia Saeed, Blood Bank in charge at the Punjab Red Crescent Society, "People lack awareness. Mothers forbid their children from donating blood even if they are young, healthy, and meet the requirements. They think donating blood will weaken them.

Another myth restricts young women from donating blood. Manahil Sheikh’s nephew was only two months old when he was diagnosed with a hole in his heart. Her blood was a match, and she donated it for her nephew. She says, "I donated blood once but later when the doctors suggested open-heart surgery, we faced a shortage of donors. Some were not a match and some failed screening tests. So I decided to donate blood once again, but my blood was refused for being a girl. I was told that I will have less blood so a male donor must be arranged."

The baby did not survive despite best efforts but Sheikh says she vowed to donate blood regularly. "I get constantly discouraged by my family and friends, but nothing can deter me now from saving a life."

Upscale and medium-size hospitals have their own blood banks to cater to their patients. Some private blood banks offer varying standards of quality. For smaller cities and rural areas, the options are limited.

Blood safety reforms in Pakistan have received attention only in recent years. Reforms were initiated by the government of Pakistan in 2008 with support from the German government. This was followed by the establishment of the National Blood Transfusion Programme in 2010. A national blood policy and strategic framework were formulated to ensure safe blood transfusions with optimal efficacy and minimal waste.

According to Dr Saeed, the change that these reforms have brought is that now people don’t get paid for donating blood. "Earlier, for some people, mostly drug addicts, it had become a profession. Now when people donate blood they are not paid for it. Their blood is screened for five diseases namely HIV, hepatitis B and C, malaria, and syphilis free of cost."

However, in the wake of the recent HIV spillover in five districts of the Punjab, namely Faisalabad, Chiniot, Sahiwal, Jhang, and Nankana, there are questions pertaining to risks of transmission of infections through transfusions.

Traditionally, in addition to friends and family networks, electronic media such as Pakistan Television Corporation (PTV) and Pakistan Broadcasting Corporation (Radio Pakistan) are used to request blood donations. However, according to Farhan Mushtaq, a program producer at PTV, "Blood donation requests through PTV are few and far between and the response by viewers is also not great."

As far as the youth are concerned, it is still easier to motivate them to become blood donors. "As many as 56 educational institutes in Lahore have signed MoUs with the Red Crescent Society, Punjab, and regularly hold blood camps. By far, our most successful campaigns are through students," adds Dr Saeed.

Grassroots community organisations are another source of blood donations. They occasionally hold blood donation camps, especially during emergencies or when disasters hit. However, due to inadequate resources, most organisations have limited their scope.

"We do not have enough resources to store blood or conduct screening tests," says M Younas, in charge at Al-Noor Donor’s Welfare Trust, Kasur. "We are running the trust entirely on self-help basis. Therefore, we have limited ourselves to blood group identification camps."

Younas explains that his organisation has compiled a database of donors which is shared with all the hospitals in the district. Hospitals or patients’ attendants can contact these donors as per the need.

Apart from conventional mediums, social media is also used for its outreach and instant connectivity to the world, in order to make blood donations quicker and more convenient. Facebook is fast becoming a reliable forum for Pakistanis to request for blood donations. There are many Facebook pages and groups where thousands of people are engaged. Though, it is hard to ascertain exactly how many people visit these pages or respond to posts. Requests launched through these pages often get a lukewarm response, and contact numbers shared are found to be switched off.

"I requested [through Facebook] but didn’t get any response, even though I submitted my requests at least 10 days in advance," says Haider Ali. He was hoping to get a sufficient number of volunteers within this time and have their blood screened, but eventually he had to arrange blood through his personal contacts.

Mohammad Imran Khan, an administrator of one such Facebook page, notes that in most cases there is no direct contact between the donor(s) and patients’ relatives or friends. "People assume that someone else might have responded to the request.

"It is our general psyche that we prefer to help those we know personally. A lot of awareness, guidance, and motivation is required in this regard," he adds.

In 2017, Facebook launched its "Donate blood" feature that allows the users to sign up as donors, find their nearest blood donation centres, and let blood blanks know when they can donate blood, or notify users when someone is in need of blood urgently. So far, more that 35 million people worldwide have signed up as blood donors.

This Facebook feature was launched in Pakistan only last year, in collaboration with the Safe Blood Transfusion Programme (SBTP). More than two million Pakistanis are said to have signed up so far. This is a positive development and goes hand in hand with better access to awareness programmes.

According to Dr Saeed, as a result of the reforms, people no longer charge for donating blood. "Earlier, for some people, especially drug addicts, it was a profession. Now, people donate blood without any compensation. Their blood is screened for five diseases -- namely, HIV, hepatitis B and C, malaria and syphilis -- free of cost. Normally, this would cost a considerable amount, depending on the quality and repute of the laboratory. So, many donors are attracted by this and become regular donors."

Rates for blood screening tests charged by reputable laboratories in Lahore range from Rs 6000 to Rs 12000.

As for rigorous implementation of these SoPs, according to the information available on the website of Punjab Blood Transfusion Authority, visits to inspect private blood banks were made by Safe Blood Transfusion Authority. Many private blood banks were shut down for not following the SoPs. "We’ve not been able to make the masses understand the importance of donating blood," says Dr Ashraf Nizami, the Pakistan Medical Association (PMA) president. "They are still very reluctant.

"Secondly, when it comes to safe transfusion of blood, we lack resources at the government level, to monitor the system properly. The doctors and medical experts also lack competence. A single unit of blood can fulfil needs of five different people, but no one really seems to know how to utilise the donated blood to its full capacity. In this way, gaps remain in the whole mechanism, right from blood donation to safe transfusion."

The culture of blood donation