Vandalising a statue limits the country’s scope of becoming a safe place for religious tourism. Such incidents cannot erase the fact that the Sikhs once ruled a great empire from Lahore 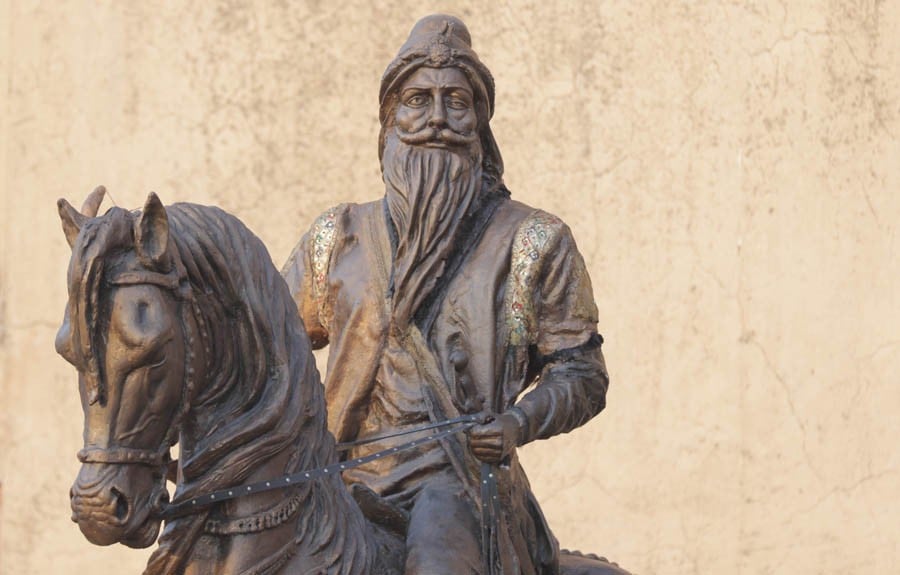 For most of us the city is a vessel that both contains and shapes our lives. Historically, it has been the focus of all ideas and energies that have guided civilisations. Containing myriad stories in its annals, antiquities, ecclesiastical (religious) history, and charters, the history of Lahore has been shaped and reshaped by the will of a masterful individual in every respective era.

Historians suggest that the events which have been acted out in the streets of a city give its spirit a uniqueness.

In some subtle way, the personalities and events of the past have permeated the very air -- and shaped our perception -- of Lahore as a melting pot of cultures and ideas. As American-British author Henry James
once wrote about Rome, "Here was history, in the stones of the street and in atoms of the sunshine."

Modern-day Lahore is known for its Mughal past from when Emperor Akbar relocated his capital from Delhi (to Lahore) in 1566, or its recent colonial history when the British army took control of the city from 1846 till 1947. Almost all history of the city prior to the Mughal era has been lost to time. Between its Mughal past and colonial history, there is a period when the city became a stronghold of the Sikhs of the Punjab who under the leadership of Maharaja Ranjit Singh
consolidated the Sikh
Confederacy through the Lahore Darbar.

Post independence, the once-shared history of the region got divided and labelled. Lahore was no different from the rest of the region the remnants of the Lahore Darbar were confined to Lahore Fort and Huzoori Bagh where the Samadhi that houses the funerary urns of Maharaja Ranjit Singh is placed. It took the authorities over 70 years to recognise the Sikh ruler as part of the history of Lahore when early this year a life-size bronze statue of the Maharaja was placed outside the Sikh Museum to commemorate his 180th death anniversary. The statue received a mixed response from various quarters of the society -- where some dubbed it as a bold move to honour Sikh heritage, others questioned its presence.

A month later, the bust was vandalised. The attackers belonging to a religious party said that creating and/or erecting a statue in a Muslim country was forbidden. They even threatened to repeat the act if the authorities didn’t remove the statue.

Though it will be wrong to blame the whole city for the actions of two vandals, the reason behind this act is rooted in the social fabric of the region. It wasn’t the first time a statue or a monument had been vandalised. From Bamiyan Buddha statues getting blown up in Afghanistan to the saffronisation of history in neighbouring India, the region has already seen such attacks by individuals or groups living on the fringes of the society. Whereas celebrating a shared history is essential to promoting understanding and reconciliation among countries, our people opted to live in a polarised environment.

The Sikh community of Pakistan, who revere the late Sikh emperor, termed the act of vandalism ugly. That it goes against what we as a nation should pursue -- religious tolerance -- is obvious, they say. They believe that such acts need to be stopped, and we need to come together as a society that honours its past and protects its cultural heritage no matter what race, colour or creed one belongs to.

Somewhere between its Mughal past and colonial history lies a period when the city became a stronghold of the Sikhs of the Punjab who under the leadership of Maharaja Ranjit Singh consolidated the Sikh Confederacy through the Lahore Darbar.

With the opening of the Kartarpur corridor, the country is opening up to massive religious tourism. Sikh anthropologists believe that of all the towns and cities where the remnants of the Sikh Empire can be found, Lahore boasts the richest legacy. Furthermore, the Sikhism reveres the city for being the birthplace of the religion’s fourth guru, Guru Ram Das, who was born in 1534, and also for being the place where his son, the fifth guru, Guru Arjun Dev, was killed in 1606.

Sikh religious tourism can be an important source of income for the region in general and to Lahore in particular. Cultural and religious sites are often surrounded by souvenir shops, restaurants, and travel agencies. These businesses create impacts like job creation, and the development of infrastructure. In a nutshell, vandalising a statue is not just limited to religious beliefs, it also limits the country’s scope of becoming a safe place for religious tourism. Such incidents cannot erase the fact that the Sikhs once ruled a great empire from Lahore.

The history of the city may be summed up in the words of F S Aijazuddin: "Anyone intending to write the history of Lahore requires the tenacity of a mountaineer."