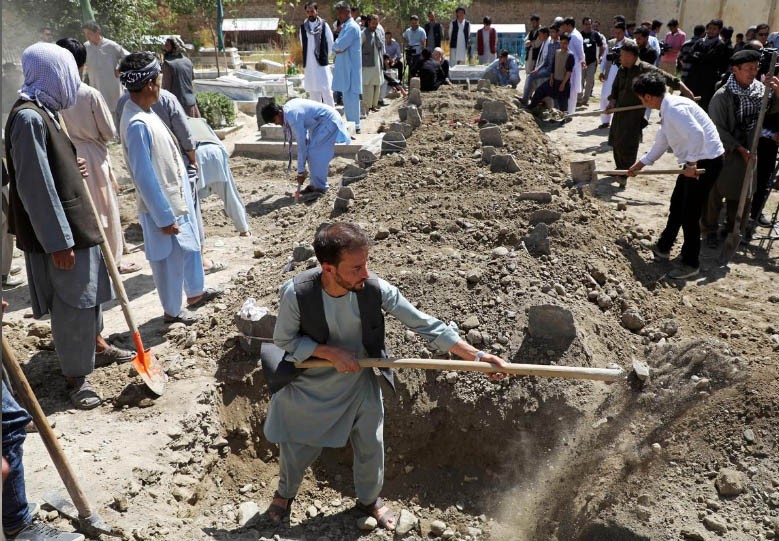 Whenever there is talk of peace in Afghanistan and the talks to end the Afghan conflict make some progress, terrorists strike with the apparent purpose of derailing the process.

There have been several terrorist attacks since July 2018 when the Taliban-US peace talks began, but two stand out in that they came at a time when both sides were reporting significant progress in the negotiations.

On August 16, a suicide bombing during the Friday prayers at a mosque linked to the Afghan Taliban in Kuchlak near Quetta in Balochistan caused the death of Hafiz Ahmadullah, the younger brother of Taliban supreme leader Shaikh Haibatullah Akhundzada. Three other worshippers were also killed and more than 20 were wounded.

There was speculation that Taliban supreme leader Shaikh Haibatullah Akhubdzada could have been the target. Taliban members claimed, however, that he hadn’t visited the mosque-cum-madrassa in Kuchlak since May 2016 when he became the head of Taliban movement after the killing of the previous ameer, Mulla Akhtar Mohammad Mansoor, in a US drone strike in Balochistan. He had headed the madrassa for years and was the prayer leader in the adjacent mosque. He lived an obscure life despite his reputation as a religious scholar until his nomination as the supreme Taliban leader.

The consequences for the Afghan peace process would have been severe had Akhundzada been killed in the suicide attack, more so due to the Taliban assertions that the detained security guard of the mosque involved in the incident was an Afghan National Army member. By implication, this meant that the suspect could have acted on the orders of the government of President Ashraf Ghani, who is angry for being sidelined in the peace talks. There is no evidence yet to support such a claim, but intelligence agencies are capable of planning timely attacks to achieve their objectives.

Two days later, on August 18, a horrendous suicide bombing at a late evening wedding ceremony in Kabul killed 63 people and caused injuries to another 182. The wedding hall, packed with more than 1,000 guests invited to the dinner, is located in western Kabul in a Shia neighbourhood. The couple and most of the guests were Shias from the Hazara ethnic group, which has faced persecution in Afghanistan in the past and has suffered repeated onslaughts by certain former Afghan mujahideen groups, Taliban and now the Islamic State.

As expected, the Islamic State claimed responsibility for the attack reiterating that it considers the Shias apostates. In fact, several past attacks claimed by the terrorist group in Afghanistan have targetted the Hazara Shias. The Taliban movement was quick to deny its involvement in the attack and condemned the bombing as unjustified.

US hasn’t opposed the election schedule but it wants a peace deal with Taliban before the polls so that peaceful polling is assured and intra-Afghan dialogue isn’t delayed or affected.

The tragedy contributed to the concerns of the Afghan people whether they would ever have durable peace in their homeland after more than four decades of conflict. Questions were raised about the fragile peace process, more so due to the fact that talks are being held with the Taliban alone and not with the other militant groups. In particular, IS has a vested interest in prolonging the conflict as it has benefited from the power vacuum in the country due to the weakening of the Afghan government and the resurgence of the Taliban. IS considers Taliban, which is by far the most powerful militant group in Afghanistan, as the main hurdle to its ambitions in the country. It has been waging a virulent propaganda campaign against the Taliban, accusing the group of hypocrisy and of selling out the jihad by negotiating peace with the US.

The two attacks took place on the eve of the ninth round of Taliban-US peace talks. Like the eighth round, which was wrapped up by the time of Eidul Azha without producing the expected peace agreement, the latest session, which began on August 22 is also being termed by many as crucial, even decisive.

Zalmay Khalilzad, the US special envoy for Afghanistan Reconciliation, has apparently received fresh directions from the White House and the State Department after the recent meeting with President Trump and other top government functionaries. Taliban, too, have held consultations and sought guidelines from their Rahbari Shura, the top decision-making body. Taliban have rejected reports that their deputy leader and chief negotiator Mulla Abdul Ghani Biradar had agreed to a 16-month US troops’ withdrawal timeline without consulting the Rahbari Shura or other members of his 19-member negotiating team. It was stressed that every issue was discussed and a unanimous Taliban position was formulated before and after peace talks on a daily basis.

President Donald Trump has made it known that he wants to bring home his soldiers from Afghanistan, if possible before the November 2020 presidential election so that he can claim having fulfilled his promise made in the 2016 polls campaign. Secretary of State Mike Pompeo has mentioned September 1 as the preferred deadline to cut a deal with the Taliban. However, both Trump and Pompeo have lately been talking about a partial withdrawal initially and then fully pulling out if the Taliban agree to fully participate in intra-Afghan dialogue and accept a permanent ceasefire. They and other US officials have been arguing the case for keeping a reduced anti-terrorism force in Afghanistan to tackle the threat from the IS and other militants groups espousing a trans-national agenda. However, the Taliban have stuck to their position that a complete withdrawal of all foreign forces must take place before there can be a movement on other issues. The Taliban have also been claiming that their fighters would be able to tackle the threat from the IS as they have defeated it in Zabul, Faryab, Jauzjan and partly in Nangarhar and Kunar provinces.

One issue that is causing bitterness is the looming Afghan presidential election due to be held on September 28. President Ashraf Ghani, who is seeking re-election along with his 2014 rival Dr Abdullah Abdullah who later became his partner in power in the national unity government, has made it clear that election would be held in time to produce a newly elected and empowered president leading a strong government to hold meaningful peace talks with the Taliban. Many others among the 18 presidential candidates think otherwise. They believe the election would further divide the country and negatively affect the peace process. Taliban have denounced the election and called it an obstacle to peace. US hasn’t opposed the election schedule, but it wants a peace deal with Taliban before the polls so that peaceful polling is assured and intra-Afghan dialogue isn’t delayed or affected. Otherwise, the Americans are aware that the election could be divisive and bring to the fore a president who won’t be inclined to offer concessions to the Taliban and accept a reduced role for his administration.

US has appreciated Pakistan’s role in facilitating the Afghan peace process but it wants Islamabad to do more to persuade the Taliban to stop being inflexible. However, Pakistan has made it clear that it can only urge the Taliban to agree to a ceasefire and direct talks with the Afghan government. There are limits to Pakistan’s influence on the Taliban, more so after the US reluctantly accepted the Taliban demand to engage in direct talks with the group and exclude the Afghan government. Taliban claimed that this had vindicated their position. They are also getting recognition increasingly as foreign diplomats and officials of international organizations visit Taliban leaders, particularly Mulla Biradar, in Qatar and their delegations are being invited to countries like China, Russia, Iran, Indonesia and Uzbekistan. With their dependence on Pakistan decreasing, Islamabad’s capacity to influence Taliban decision-making has also been reduced. However, a peaceful Afghanistan is in Pakistan’s interest. It seems determined to work for Afghan peace even though its attention has lately become focused on Jammu and Kashmir and the Line of Control in the wake of New Delhi’s unilateral and provocative move to end the special autonomous status of the disputed state in violation of UN Security Council resolutions.