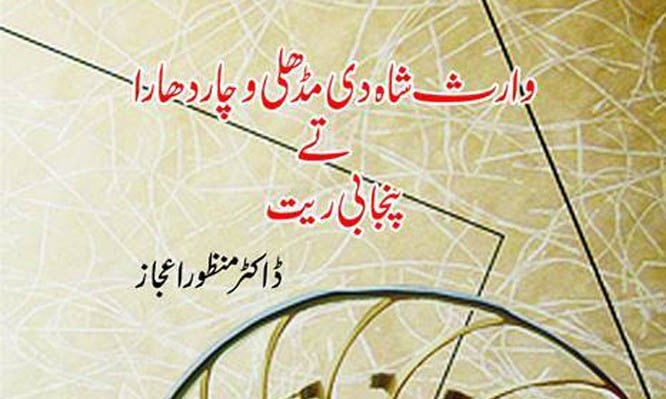 There have been many arguments about Waris Shah’s (1722-1798) Heer. It is said that the book vividly manifests the struggle of Heer for her right to love in a patriarchal society. Or that it is a romantic tale written to please those who are at leisure while grazing the cows in open fields. It is also said that it is a mythical story woven into a poetic epic which expresses the ethos and aspirations of the Punjabi people in an agrarian society. Or that it is basically a long discourse about male-female relations. It has been noticed that the tone of the ‘Qissa’ is overtly political as it encompasses the social and economic system of the 18th century Punjab. All these assertions about Heer have been hotly debated.

Completed in 1766, the original text of Heer was drastically altered, added to and corrupted beyond recognition by other poets. The introduction of the printing press in Punjab in 1864 increased the publication of Heer manifold and changed it to asli tay vaddi Heer (the real and enlarged Heer). It is due to editors and scholars like Abdul Aziz Bar-at-Law (1884-1970) and Ustad Sharif Saber (1925-2015) that we now have the ‘the small, original Heer’. There was always a dearth of good critical work on Heer. The other day I was studying Waris Shah Number (p. 1969) of the Punjabi magazine Punj Darya, consisting of a total of 532 pages, but there was hardly an article in it that has survived the test of time. Heer has been translated into English by Sant Singh Sekhon (1908-1998) and Muzaffar Ghaffar but modern critical studies are not coming up. It was only in the 1960s and later that we got some good authentic books on the subject. Najm Hosain Syed wrote an excellent book Lōkāṃ Kamaliāṃ Nūṃ Kissā Hushiār (2004). Similarly, Ishwar Dayal Gaur wrote Society, Religion and Patriarchy: exploring medieval Punjab through Hir Waris (2009).

And now we have the books of Dr Manzur Ejaz about Heer by Waris Shah.

After completing his magnum opus, Waris Nama, in five volumes, Ejaz summarised his readings of Waris Shah in a small book  Waris Shah di Mudhli Wichaar Dhara Te Punjabi Reet. He then translated it into English, Waris Shah: the Ideologue.

Ejaz is well known in progressive circles. As a young man, he was active in the anti-Ayub student movement in 1968-69. While in Punjab University in the ’70s, he was deeply involved with the NSO (National Students Organisation) and the YPF (Young Peoples’ Front). He fell in love with Punjabi language and literature when he met Najm Hosin Syed and Mushtaq Sufi. The passion has stayed with him ever since. He is a founding member of the Punjabi Adabi Sangat. The weekly meetings have been going on at Jail Road, Lahore, since the early 70s. They consist mainly of the study of classical poets. After being expelled from Punjab University as a lecturer in philosophy, Ejaz opened a book shop called Punjab Adabi Markaz but couldn’t make both ends meet. Finally, in 1978, he left the country for the USA.

However, unlike many political workers who became ‘westernised’, he remained a staunch Punjabi lover. In addition to writing a regular English column for nearly three decades, he has been writing a weekly Urdu column for a daily as well. His love for Punjabi literature and language clearly surpasses everything else. Teaching philosophy at the Punjab University and studying Punjabi literature for almost half a century, Manzur Ejaz is fully equipped to write about Punjabi literature with an authentic voice.

Manzur Ejaz’s language is direct and easily understood but it remains a literary diction. He is a model for young writers. His books are a good contribution to increasing the understanding of Waris Shah, who is rightly called the bard of the Punjab.

His book Waris Shah di Mudhli Wichaar Dhara Te Punjabi Reet is divided into eight chapters. In the first chapter: Waris Shah: The Realist, Ejaz defines the basic conflicts in the Qissa. The first one is between Ranjha and his brothers in Takhat Hazara. "To untangle Waris Shah’s ideology, one must start at the beginning of the story. No other poet started their version of Heer Ranjha with a dispute over land before Waris Shah."

The second conflict is between Ranjha and Mullah, who refuses to give him shelter at his mosque. The third is between Mallah (boat man) Luden and Ranjha. Then Ranjha is in conflict with Chuchak, the landlord. Then Heer is pitched against her family, Kaido, Qazi, Kheras and the judge -- essentially the whole system. "Waris Shah is making the point that it is the class-based structure of the society contributes to its materialism and unfairness", Ejaz says.

Other chapters are on Waris Shah’s additions to the story, spiritual or worldly love, women’s world, social conditions and history of the Punjab, language and style of Waris Shah and finally Waris Shah’s epistemology.

In the chapter The Women World, he writes, "The freedom of women will lead to the emancipation of the entire mankind. This is the main reason that Punjabi’s leading poets have addressed the world in a female voice." That voice is rebellious, anti-patriarchy and anti-clergy.

Manzur’s knowledge of Heer is amazing; his citations from Heer are endless. After every third or fourth sentence, he quotes verses from Waris Shah.

He is basically a political worker and writes to educate people. His language is direct and easily understood but it remains a literary diction. To me, he is a model for young writers. His books are a good contribution to increasing the understanding of Waris Shah, who is rightly called the bard of the Punjab.