Artists are faced with a quintessential dilemma: how to respond to atrocities and oppression taking place in Kashmir in their art-making? 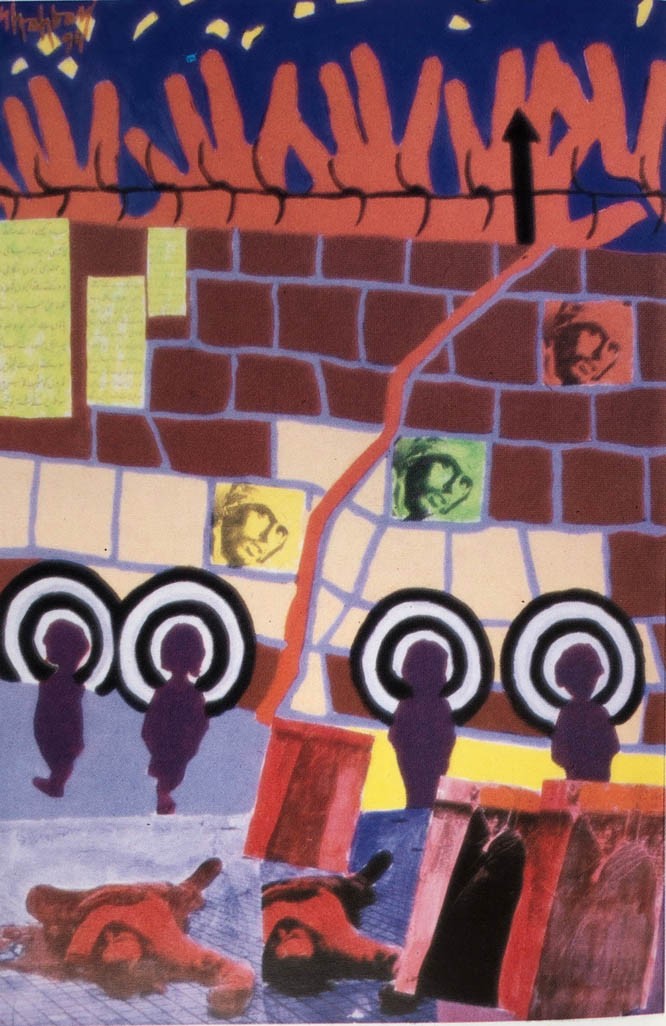 After the August 5 decision of the Modi government to revoke Article 370 of the Indian constitution and the ensuing unrest, artists in Pakistan are confronted with this question: how to respond to atrocities and oppression taking place in Kashmir?

Some of them have participated in public protests or expressed anger in private meetings. They come to their studios thinking about the blockade, curfew, firing and siege unfolding in the India-held Kashmir.

Kashmir may have become hotter in recent years but news about similar tragedies are is routine -- from Palestine to Syrian refugees, North African immigrants drowning in the Mediterranean Sea, terrorist attacks from New Zealand to Norway.

A popular reaction is to ignore it, believing art has nothing to do with politics. Art, in any case, is not about reporting an incident, or commenting on a recent development. It levitates from the transitory, seeking to address the eternal.

Yet the images -- of men and women hit with pellet guns, deserted roads, cities cordoned off with barbed wire, demonstrations by citizens against security forces -- follow the artists into their studio, in the dark recesses of self where creativity sprouts from.

Should they then continue with the usual themes, concerns and imagery or shift their position to a more daring one? Artists often have to deal with this dilemma.

Some artists, including Salima Hashmi, Mansur Rahi, Anwar Saeed, Afshar Malik, Shehbaz Malik, Ali Raza, Asmaa Hashmi, Farina Alam, and others, did produce works addressing the Kashmir issue back in 1994, for the exhibition Day Shall Dawn, organised by the National Council of the Arts, held in Islamabad in October 1994 and later in Muzaffarabad in April 1995. A few of these paintings were later sent to Pakistan’s missions abroad.

Apart from this official project, many artists have attempted to respond to the situation in Kashmir. For example, Ijazul Hassan painted a Kashmiri woman lamenting next to her martyred sons. Titled Mothers of the World Unite (2000), the work depicts streaks of blood on the faces of three dead men.

The picture of the mother and the deceased reminds one of newspaper photographs from Kashmir, yet the artist has created a work that moves beyond a specific location to convey a universal subject.

Likewise, Asmaa Hashmi, whose family was originally from Srinagar but lived in Islamabad (she is presently based in Oxford), used chanar (maple) leaf in her etching prints and mixed media. Someone who is familiar with Kashmir’s politics would recognise the genealogy of Hassan’s imagery. So would someone who is aware of the flora and fauna of the Valley. But, for others, these are just visuals, perhaps about a gloomy situation or vegetation of a certain region.

Do artists need a global audience to respond to certain content without really comprehending its context? A crying mother with bodies of bleeding boys could be from anywhere: Kosovo, Yemen, Syria, Palestine, Sudan or Myanmar. Similarly, the reddened leaf amid a geometric pattern may be about Lebanon, Libya, Armenia or Canada. Yet these are/were about a specific territory -- Kashmir.

There is another choice -- formal, conceptual and concise. Would the artists be happy extending their subject matter, hence neglecting their ‘original source’? Would they be satisfied that their imagery is read beyond its initial source, thus moving away from the primary issue? These questions are difficult to answer but easy to decide -- because it is the format of an artist’s language that determines the creation than him/herself.

This comes as a reminder of Roland Barthes’ view that it is the language which writes not the author. "No one can without formalities pretend to insert his freedom as a writer into the resistant medium of language" -- Writing Degree Zero.

In most cases, artists are trained or tuned to omit actual or physical details. American writer Jonathan Lethem recalls that in a writing workshop he was told, "serious fiction must be timeless", even though the instructor had characters who "moved about in electricity-lit rooms, drove cars, and spoke not Anglo-Saxon but post-war English."

The assumption is that art must be above current affairs. Two thousand people dying in an earthquake in Palermo, 20,000 perishing in cyclone of Sylhet, 200 hit in a train accident in Bihar, 20 people blown away in a bomb explosion in Jalalabad: do all these demand a response from the artist community?

For many, art is supposed to engage with higher issues. The death of a large number of people or the murder of a leading political leader does not qualify as the subject of sublime art. The prime example is of Shaheed Benazir Bhutto who has been paid homage by painting her portraits and installing her statue in Karachi, but her killing has not yet come to art. Nor has the hanging of her father, Zulfikar Ali Bhutto, which did inspire some poetry, drama and novel but not much in terms of visual arts.

Avoiding these subjects in art is a way of negating the history. A majority of classical European paintings and sculptures, and Indian, Persian and Turkish miniatures were based on real life incidents or those from the religious past. Today when we appreciate these works, the identification of characters/event is only one aspect; in some instances link to the initial source is forgotten. These works are admired today more because of how the artists employed their imagination to make art that transcends its time, immediate constraints and even its limited meaning.

In contrast with earlier artists who were commissioned by religious figures, rulers, merchants etc present-day artists are fairly independent (market forces notwithstanding) in their choice of subject matter. During atrocities, it is often artists from the targeted community or its sympathisers who respond. When those belonging to the oppressors’ side deal with the same situation, the work has greater force since it emanates from guilt and self-criticism.

It is necessary to look beyond clichés, routine ideologies and tired positions. The work of German artists Amsalem Kiefer on World War II and Holocaust, and writings of Indian author Arundhati Roy (both fiction and non-fiction) on Kashmir, are examples of how creative individuals, through words and visuals, not only cleanse their own conscience but also that of their nation and the whole humanity.