Pepsi Battle of the Bands and the Fawad Khan conundrum 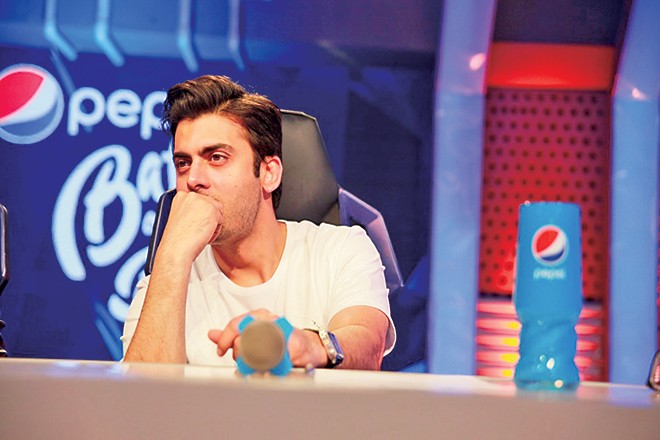 On a visit to the set of Pepsi Battle of the Bands 4, the only judge who remained unapproachable was Fawad Khan; the rest of the judges – Faisal Kapadia, Bilal Maqsood and Meesha Shafi – were willing to talk. It was said that Khan was not feeling well.

His performance this season was being kept a secret.

During season 2, when I had the opportunity to talk to Fawad Khan for five minutes, courteous as he was, he noted that he’s looking to have some fun while performing with EP. Fair enough.

Now we’re in season 4 with former judge Atif Aslam heading to Coke Studio - if the grapevine is to be believed - and unlike earlier seasons, it is Fawad Khan who is being used to attract fans to Pepsi Battle of the Bands - almost as if it is a popularity contest and not a series that is meant to find a great band while providing platform to a handful of others.

A great example is the Pepsi YouTube page. At the end of every episode, the co-hosts Ali Safina and Hina Altaf remind us to visit the page to see the performances. When you get to the Pepsi Battle of the Bands YouTube page, the top picture that greets you is of Fawad Khan alone, which makes you wonder what on earth Strings and Meesha Shafi have done to earn this omission.

Strings are set to release their last song from their sixth studio album, 30, with plans to make another one while Meesha Shafi - since going solo from Overload - has spent a decade working with various producers and the evolution is starting to show with her tracks she has so far performed on Pepsi. An EP is also in the offing because Meesha Shafi knows now what her narrative is and it will reflect in performances and the EP she aims to release. What is Fawad Khan releasing or planning to release? Having passion for music is one thing but this is going a little too far.

Beyond the screenshot. Here are some facts.

EP comprising Fawad Khan, Ahmed Ali Butt and Xulfi (along with several others) after just one historic album, Irtiqa, had a falling out with the architect of the album, Xulfi.

In EP’s 2010 Coke Studio performance - a cover of Sajjad Ali’s ‘Bolo Bolo’ – Xulfi is not present. The band also came up with a Bilal Lashari music video, ‘Shor Macha’ that was funded by Telenor and excluded Xulfi - who had by then formed his own band called Call.

Eventually though, EP and Xulfi buried the hatchet.

The band, in its other iteration, (that is without Xulfi) still didn’t last long since Fawad Khan, an actor as well by then, who had also previously starred in a film called Khuda Kay Liye by Shoaib Mansoor but self-admittedly never capitalised on its success, went on to star in a handful of TV dramas before a little TV drama called Humsafar came along with one co-star Mahira Khan. Both become sensations.

Fawad Khan went to Bollywood; won a Filmfare award for his debut film, Khoobsurat and took up a role in Kapoor & Sons that half a dozen Bollywood actors had passed on. He was fantastic; ditto for Ae Dil Hai Mushkil. Along the way, he appeared on the cover of Filmfare three times. Had relations with India not gone sour, Khan would’ve given every contemporary actor in Bollywood a run for their money.

It has been reported, for instance, that Deepika Padukone recommended Fawad Khan for the role that went to Shahid Kapoor in Padmaavat.

In the absence of Bollywood, however, Fawad Khan – who hasn’t been a part of the music scene in over a decade or released anything (having chosen acting over music, which is his right) emerged as a judge on Pepsi Battle of the Bands 2.

This was and still is the real conundrum. What is his motivation? Is it the lucrative Pepsi contract that convinced him to be a judge? Is it that Pakistani films, a decade after Khuda Kay Liye, in his eyes are not up to par? Apart from cameos, he hasn’t done a Pakistani film since KKL and will return in and as The Legend of Maula Jatt, years in the making to a point you have to wonder if it will ever release.

His priority is cinema and he’s brilliant at it; this is like killing time for him as he explores the medium of web or until another Pakistani film that really appeals to him comes along. Is Fawad being forced to sing? Because where else has Fawad Khan sung? In Bollywood, during an award show.

The performance and jingle for PSL 2019 was a paid gig as well. Pakistani music industry may not have the infrastructure to call itself an industry but there are so many people who could be in his place as judge and who have earned it by playing and releasing music consistently.

In the end, Pepsi needs to ask itself if it is running a popularity contest or something akin to the original series, where the judges panel featured two former Vital Signs members – Rohail Hyatt and Shahi Hasan – alongside journalist Fifi Haroon.

It also needs to ask itself if it is living up to its own promises, because we need to see the albums the winners should’ve made by now, and released prominently by Pepsi.

Yes, winners of season 2, Kashmir are unveiling their new album themselves but whatever happened to Pepsi’s promise beyond handing money over to winners and runners-up? Time to take a harder look at real goals.

Pepsi Battle of the Bands and the Fawad Khan conundrum