A clean chit this Eid

The LWMC might have passed the test this Eid but its future still hangs in the balance. Will it survive inquiries against its officials and outgoing contractors? 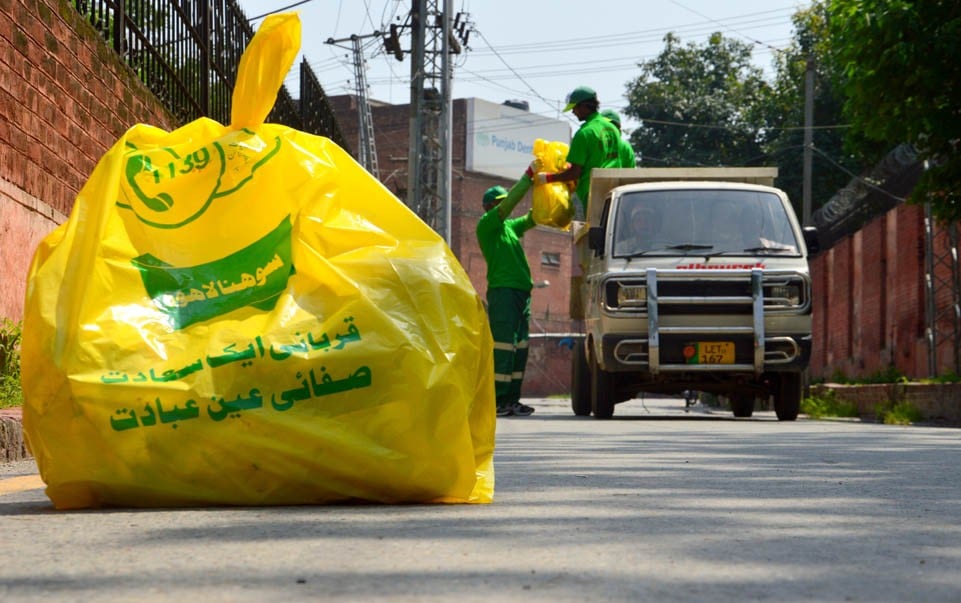 On the run up to Eidul Azha, Lahoris were apprehensive about the state of cleanliness in the city. They feared the streets would look like slaughterhouses.

Their fear was justified. They had experienced such a situation last year, when the Lahore Waste Management Company (LWMC), which is responsible for keeping the city clean, was cash-strapped and in direct conflict with the local government representatives mostly belonging to the PML-N. There were allegations and counter allegations levelled from both sides.

The situation became so charged that a former Lahore mayor and a former deputy commissioner entered into a war of words, and used the media to condemn each other. It was the first time the local government representatives were not taken on board by the LWMC on the cleanliness drive in the city - obviously because they belonged to the PML-N.

The LWMC officials claimed that the local government representatives did not allow them to collect animal waste, rather invited the media to capture the mess.

This year has not been good for the company as well. Workers have gone on prolonged protests to get their dues cleared. The executive staff was under pressure as the National Accountability Bureau (NAB) arrested Tahir Maqbool, the former  Procurement & Contracts General Manager at LWMC in May on allegations of illegal and false evaluations, causing an approximate loss of Rs1 billion to the exchequer. It was suspected that he had unduly facilitated M/s Albayrak, a contractor of the company, and had earned illegal benefits himself.

Things turned out to be better than expected. LWMC performance was generally satisfactory. Unlike last year, vehicles owned or hired by LWMC were visible on the roads and the coordinators nominated by the PTI leadership at the union council level were active. There was excellent coordination between them and the LWMC workers.

This does not mean there were no complaints. The LWMC helpline received a significant number of complaints and its leadership suspended some of its staff in various localities for not performing well.

While the company credits its staff for the improved performance, others claim it is fighting a battle for survival. They point out that the company is trying to stay relevant as other companies set up by the previous government are being wrapped up.

While the company credits its staff for the improved performance, others claim it is fighting a battle for survival. They point out that the company is trying to stay relevant as other companies set up by the previous government are being wrapped up.

Mujtaba Chishti, a former union council member in northern Lahore, points out that performance on Eidul Azha is not indicative of LWMC’s success which is passing through a turbulent phase at the moment. "On this occasion, all civic departments and the provincial government come to its help whereas during the remaining year it has to be on its own."

He says the company has been discredited due to allegations of corruption against its officials and alleged malpractices of the Turkish companies hired as contractors. It was alleged that the contractors increased the weight of waste deliberately to claim more money. They were paid in US dollars. "The fact these companies were awarded contracts for 7 years has put them in a position where they can manipulate things with ease," he adds.

Chishti believes the PTI government in the Punjab has used this occasion to develop goodwill, "by releasing sufficient funds to the company and instructing all the civic departments to give priority to the party workers during the cleanliness drive. It is quite amazing to note that the government which was thinking about scrapping the LWMC is giving it a bail-out".

The existing contracts of LWMC given to Turkish companies will expire in March 2020. Thereafter, it is likely to place ads for new contracts. The Punjab government engaged the World Bank for a study on how to make waste management system efficient and cost effective. The report, titled Punjab Integrated Solid Waste Management Strategy, makes recommendations, including an increase in services that LWMC can provide such as Green Waste management, recycling programmes to reduce landfill dumping, shared services concept for administration across the province, introducing tariffs for door-to-door collection of waste and centralisation of financial Enterprise Resource Planning system across all waste management companies in the Punjab enable real-time view of income statements for the entire province.

"The threats identified in the report include government regulation or interference in LWMC operations, fear of what will happen at the end of international contractor agreements, fear of repercussions from the NAB and the management’s fear of decision making.

There are many areas the company vehicles cannot access, so the waste has to be removed through handcarts and wheelbarrows which takes more time," the report states.

Jamil Khawar, the LWMC spokesperson, tells TNS the company is well aware of the issues and planning to streamline things, including hiring of new contractors in a transparent manner. "This year the company performed well because it coordinated with the DHA, the Cantonment Board, the private housing societies, the Railways Lands etc and invited their representatives to come and sit in its office and jointly manage cleaning operations."

He adds, "What we did this time was that we asked other entities to lift animal waste from areas where our vehicles could not enter and place it outside in the common area so that it could be lifted and taken to the landfill site for disposal."

Khawar says this year 3,400 pickups were hired to collect waste of sacrificial animals in the city which is a "record number". No doubt there can be a slight delay in reaching a spot but this is because a vehicle has to make a round trip to the landfill site to dispose of the waste it has already picked, he adds. "When a vehicle is available in an area, there is no concept of a delay."

He hopes the LWMC will continue to serve the masses in future and says it is a matter of satisfaction for them that CM Usman Buzdar has announced a bonus for the company staff in recognition of their hardwork on Eid. "All of us, including our Managing Director Muhammad Ajmal Bhatti, were in the field round the clock. We visited narrow streets in congested areas on motorbikes to inspect the quality of cleanliness work," he concludes.

The writer may be reached at [email protected]

A clean chit this Eid