Will the Orange Line meet its latest deadline for completion? The Punjab government seems to think it will 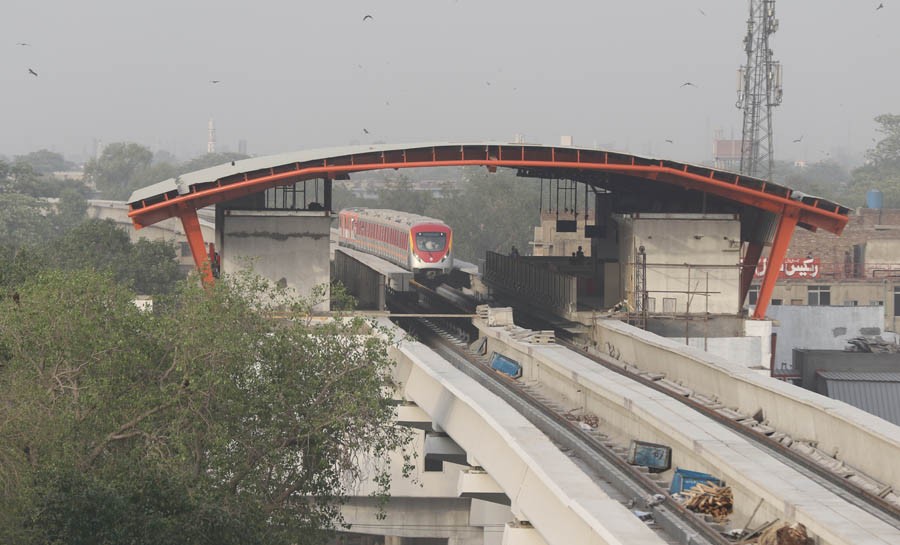 The Orange Line Metro (OLMT) is once more off-the-rails. Operations were supposed to begin this July; having already been delayed from the original December 2017 deadline. The Supreme Court (SC) is now involved and has directed the Punjab government to ensure that the rapid transit system meant to run through Lahore is up and running by January 2020.

On paper, the overall cost of this mega project is $1.6 billion. Pakistan’s share totals $300 million while soft loans from China make up the balance. However, this is likely a conservative estimate given the enormous delays that have plagued the initiative. Such as a legal challenge (2016) on the grounds that heritage sites were at risk from construction, thereby prompting the Lahore High Court (LHC) to issue a stay order. It took 22 months to resolve the matter. During that period companies working on the venture remained on the ground and bore recurring expenditure such as: staff salaries, office rent and machinery maintenance.

An inquiry into these set-backs is needed. The PMLN was at the helm in the Punjab when the OMLT accord was inked back in 2014. Indeed, Chief Minister Shahbaz Sharif hailed it as a high-priority enterprise. Fast-forward to the present and everything is at a standstill; official claims that 98 percent of civil engineering work has been complete notwithstanding. The News on Sunday (TNS) talked to different stakeholders to get to the bottom of the story. Here is what we found out:

Former Punjab Metro Bus Authority chairman Khawaja Ahmad Hassaan welcomes the SC deadline directive. Not least because repeated delays to OLMT have, he believes, dealt a great blow to those whom it would have benefitted the most. "We launched and executed the project in good faith. But shortly after we [PMLN] left the provincial government -- the OLMT came to a halt."

This has been exacerbated, he goes on to say, by the new PTI set-up’s foot-dragging on adequate subsidies. Hassaan finds this unfathomable given that it is common practice around the world to use government coffers to partially fund public welfare initiatives. This is crucial to ensuring that such services reach the right socio-economic demographic. In the case of the OLMT, he notes, this would mean those wholly or largely reliant on public transport.

"We worked relentlessly to translate this dream into reality. And it would be nothing less than sheer injustice and shortsightedness if we are not given credit for this." The Orange Line represents an important public service that is, in addition to everything else, environment-friendly. Running entirely on electricity makes it pollution-free. "Time will tell who was correct and who was flawed in their approach."

Concerns still remain over practicalities. For starters, a 72-megawatt power plant is needed for the trains to run smoothly. Pakistan is an energy deficient nation. Moreover, no one has seemingly learned from the mistakes of the Lahore Metrobus, where electric escalators at each terminal soon became non-operational. Simply because the cost of electricity was too high.

Hassaan goes on to point out that the PMLN conducted a test-run after having laid down most of the 27-kilometre track. Not only that, they launched a media campaign; inviting interested parties to compete in the bidding process with a view to taking over the helm in the long-term. Interestingly, he recalls, the Chinese showed little enthusiasm despite their financing commitments to the OLMT. Describing their change of heart as a "good omen", Hassan stresses that it is imperative for the sitting government to pick the right people for the job by guaranteeing a transparent tendering process.

However, not everyone sees it this way. Advocate Azhar Siddique, who filed the 2016 petition against the construction of the Orange Line, is quick to clarify that the LHC stay order was not responsible for extensive delays. "This related to a combined length of just 1.5km; at different points where heritage sites are located. There was no bar on laying down the rest of the track. But the previous government did not do so."

He also contends that the new Punjab government simply cannot afford to complete the OLMT. "For starters, a 72-megawatt power plant is needed for the trains to run smoothly. And Pakistan is, of course, an energy deficient nation." He is further frustrated by how no one has seemingly learned from past mistakes. "The escalators installed at all [Lahore] Metrobus terminals were supposed to run on electricity as well. They soon became non-operational because the cost of electricity was too high."

On the question of subsidies, Siddique fancies that the government will be unwilling to fork out close to Rs20 billion per annum. Firstly, it is desperately short of funds. Secondly, the cost of input far exceeds output."I don’t understand how the project will be completed within the timeline set by the apex court. Building work on the power plant is far from complete." All of which means that the PTI is likely not in a position to set the price for a 27-km journey at Rs 120 (one-way). Indeed, there are reports that tickets might well go up to Rs 250-300, potentially undermining the objective of affordable transport for the masses.

Treasury MPA Sadia Sohail Rana is a member of the body constituted by the Punjab chief minister to review and rationalise the operational cost of the OLMT. Talking to TNS, she lambasts the PMLN for playing with the public purse through shoddy planning and faulty designs and poor execution. The entire enterprise, she says, is a mess.

"We can neither abandon this project nor can we afford heavy subsidies. We will, nevertheless, fully abide by the court’s decision. As things stand now, work is in rapid progress and we are hopeful that it will be completed ahead of the January deadline." Confirming that ticket prices will go up, she says that details will be announced soon.

Below is a round-up of updates and additional details provided to TNS by Punjab government sources.:

Responsibility for construction, planning, operations and maintaining mass transit systems in the major urban centres of the province lies with the Punjab Mass Transit Authority. It has divided the Orange Line project into two parts: civil engineering and electrical and mechanical engineering. Pakistani companies were awarded civil engineering contracts; under the supervision of the Lahore Development Authority (LDA). There have reportedly completed 98 percent of the work. Chinese defence corporation Norinco, which won the contract for electric and mechanical engineering, then took over. Government delays in paying contractors contributed to the prolonged impasse.

All that remains is the hiring of commercial contractors. A tender has recently been re-floated by the government since one of two parties that had entered the bidding process on March 20 was ruled out on technical grounds. Under the contract, the successful bidder will be required to meet all operational requirements for the rapid transit system, including; the provision of electricity, signal and communications facilities, track maintenance and repair, as well as a CCTV system.

Under the terms of the contract, Norinco will conduct test-runs for at least six months, thereby guaranteeing sufficient time for safety checks on both trains and tracks.

If things go to plan, it is not inconceivable that the SC deadline will be met. Finally.