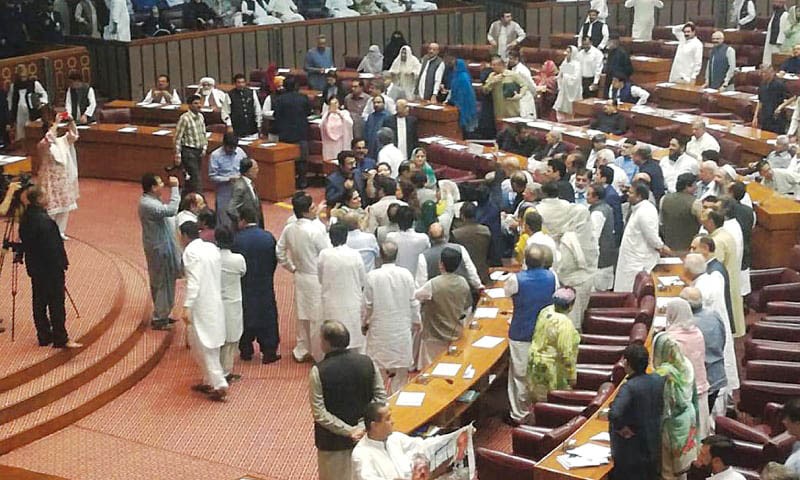 The ruling Pakistan Tehreek-i-Insaf (PTI) completes its first parliamentary year this week. But while that may be an accomplishment for the party which promised change, observers term its past one year’s legislative performance dismal and insufficient in taking the parliamentary process forward.

In its first year, the PTI government not only failed to evolve national consensus on key issues including security, economy and social development through the parliament but also struggled to convene the assembly for 130 working days - a minimum annual requirement under the National Assembly rules. In a bid to meet this requirement, parliamentary observers believe the assembly remained in session even until last week with pending business on its agenda, and included holidays to complete the count.

During its session, the house frequently failed to ensure discipline. Proceedings remained either marred due to opposition protests or adjourned to avoid government-opposition confrontation.

The ruling PTI-led coalition passed ten bills and introduced eight ordinances in the first parliamentary year in the National Assembly. The previous assembly passed eleven bills during their first parliamentary year 2013-2014 while the assembly prior to that passed five bills during their first year 2008-2009. Of the ten bills passed in the National Assembly, four sailed through the Senate while three remain pending in the upper house. The remaining three bills passed relate to the annual budget. In total, seven bills have turned into acts since the PTI government came to power in August 2018.

This figure is less than the number of presidential ordinances - eight - passed during the same year.

The recently enacted laws relate to finance, defence production and election in the tribal areas of Pakistan.

"There is no improvement in the general environment of the assembly as compared to the past," says Ahmed Bilal Mehboob, president PILDAT. "This is because of sustained bitterness and confrontation with the opposition for almost an entire year." He says such environment not only affects the process of healthy debate but also provides challenging environment during legislation. "There has been no significant legislation passed by this assembly during its first year," he says. Only ten bills have passed while 50 had been tabled, including many private member bills. "This is contrary to the PTI manifesto and reforms promise, which requires more serious legislation," he adds.

Mehboob says given the evidence it can be concluded that the PTI’s performance in the parliament during the first year has not been satisfactory. He foresees more challenges in the coming days which would further affect the legislative performance of the assembly.

Another setback on the parliamentary front was the delay in forming standing committees of the National Assembly during its first parliamentary year. Owing to a lack of political consensus with other parliamentary parties, the process remained delayed by almost six months. According to the Rules of Procedure of the National Assembly, members of these standing committees should be elected within thirty days after the election of the Leader of the House. The PILDAT data claim that the previous assembly had managed to form these committees in almost three months.

Interestingly, during the same parliamentary year as many as six opposition members have been arrested in different cases - a move which the opposition alleges to be politically motivated. Three of them belong to Pakistan Muslim League-Nawaz, two from Pashtun Tahafuz Movement and two from Pakistan Peoples Party. The ruling PTI also witnessed a defeat during by-polls when it lost its seat in NA 205 in July 2019.

Prime Minister Imran Khan’s attendance in the National Assembly has also not been encouraging. According to the data gathered by Free and Fair Elections Network (FAFEN), PM Khan appeared 12 to 14 times during the first year of the assembly. This is in contradiction to his earlier vows to ensure regular presence in the assembly and to respond to questions in the house fortnightly.

PM Khan has yet to hold a single question-hour sitting in the assembly, something which is in clear contradiction to his public vows. Meanwhile, the custodians of both the houses, the Senate and the National Assembly, have also been urging the government to ensure presence of its ministers to respond to questions, regularly and fully-prepared.

"National Assembly remains ineffective in terms of oversight because of delays in forming standing committees," says senior journalist and parliamentary observer Tahir Khalil. To make matters more complicated, the speaker of the assembly recently issued a notification stating that standing committees will only convene during assembly sessions. "Standing committees play an oversight role and they keep the assembly functioning throughout the year through meetings. But such moves have made them ineffective," he says. This, he claims, has been done on political grounds.

Khalil explains that arrested members of the opposition engaged in these committees seek production orders in a bid to come out of jail. "To put an end to this, the speaker has issued such a notification, which in turn has affected parliamentary performance."

Khalil says the PTI’s policy of confrontation with the opposition is affecting assembly performance and the quality of parliamentary debates. He says this consequently leads to failure of the government in evolving a political consensus on national issues, including security, economy, health and education, water and energy. The recent parliamentary debate on Indian Occupied Kashmir following the revocation of Article 370 by India was largely marred by political rhetoric creating hurdles in developing a national consensus. "The number of ordinances passed in one year - one of the highest in the history of parliament in a first year - itself shows the vulnerability of the National Assembly," he says.

In the coming days, Khalil predicts increase in political confrontation due to ongoing arrests of opposition leaders. He says parliamentary democracy may witness further deterioration leading to an adverse impact on the assembly’s legislative process.