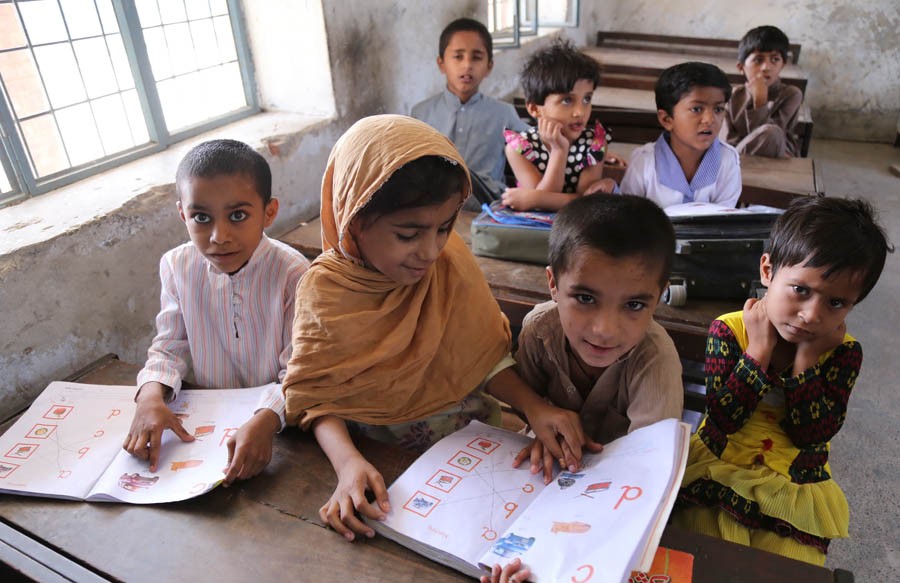 The sustainable development of a country is dependent on various social, political and economic factors including education, employment, community safety, stable political environment and social supports.

Economic growth can be defined as a positive change in the level of goods and services produced by a country over a certain period of time. This growth is related to increase in per capita national output or net national product of a country that remains constant or sustained for many years.

Strengthening Participatory Organisation (SPO) data shows that up to 40 percent of Pakistanis live below the poverty line - on an income of $1 a day or less. Consumption-based poverty is more than 29.5 percent, and multidimensional poverty which include, health, education and living standards has reached 38.8 percent.

Pakistan has the world’s second-highest number of out-of-school children (OOSC). According to the United Nations Development Programme (UNDP) an estimated 22.8 million children aged 5-16 are not attending school, representing 44 percent of the population in this age group.

Census and Economic Information Centre (CEIC) data shows the unemployment rate of Pakistan in 2018 was 5.79 percent. The reasons for this included lack of resources, investment and opportunities, a poor education system, energy crises, and violence.

As a result of enhanced resources made available to the provinces under the new National Finance Commission (NFC) Award and the 18th Constitutional Amendment, size of the provincial Annual Development Programmes (ADPs) has increased from 2010-2011, while the ratio between the federal PSDP and provincial ADPs has reduced correspondingly.

However, during a media briefing, Parliamentary Secretary on Planning Kanwal Shauzab said that the 18th Amendment does not allow the "creation of four states within a state", and that the federal government still holds the authority to ask provinces about implementation of the Sustainable Development Goals (SDGs).

Following the culmination of Millennium Development Goals (MDGs) in 2015, the United Nations adopted more comprehensive Sustainable Development Goals (SDGs) - a collection of 17 global goals and 169 targets. As a demonstration of political commitment, Pakistan integrated the SDGs into its national development agenda in February 2016, becoming the first country to do so.

In terms of institutional arrangement, task forces in the national and provincial assemblies have been established to review progress and facilitate legislative support for implementation. Seven SDGs Support Units instituted at federal and provincial levels facilitate vertical and horizontal coordination among the stakeholders.

Government of Pakistan has submitted its first Voluntary National Review (VNR) of SDG implementation during the July 2019 session of the UN High-level Political Forum (HLPF). The key messages of this report focus on the country’s political commitment, institutional readiness and partnerships plans to alleviate poverty; commitment to eliminating hunger and improving health; action on environmental protection; and monitoring and evaluation.

According to the government, the national resolve to eliminate poverty is firm. A national poverty alleviation program Ehsaas (compassion) has been launched this year to expand social protection, safety nets and support human capital development throughout the country. The National Socioeconomic Registry (NSR) is being updated to target the poorest more effectively and ensure that no one is left behind.

Furthermore, the government has also announced to increase the allocation of resources while focusing on eliminating hunger.

Coordinator at the Pakistan Development Alliance (PDA), Zia Ur Rehman, says that the government’s plan to eliminate poverty appears over ambitious as recent trends indicate an economic downturn, high levels of inflation, rising food and water insecurity, and loss of livelihoods.

"Unfortunately, we cannot find any productive policy at the federal or provincial level that might help counter inflation, manage resources for public goods and services (particularly for sexual and reproductive health, and life skills based education, girls right to quality secondary education), pervasive gender-based violence and discrimination, and lack of access to justice."

The government has also launched a Universal Health Coverage (UHC) initiative, the Sehat Sahulat Program, to provide health insurance coverage for those in need. This programme will benefit approximately 15 million people living below the poverty line. For the purpose of performance review, a National Steering Committee has been formed which includes representations from federal, provincial and regional health departments.

"The economic inequalities in Pakistan based on income, sex, age, disability, sexual orientation, race, ethnicity, religion and opportunity have grown," he adds.

Iftikhar Mubarik, the Search for Justice executive director, says that to achieve the targets of social development there is a dire need to revisit the style of governance. "Elimination of social dilemmas must be the government’s priority which is, unfortunately, rare in current governance."

The government claims that it has surpassed national commitments on environment and climate change under the Bonn Challenge through its Billion Tree plantation, which is spread over 350,000 hectares. It has scaled up the commitment to a five-year, country-wide tree plantation drive, known as the 10 Billion Tree Tsunami, to restore forests and mitigate climate change. Moreover, it has launched the Clean and Green Pakistan initiative.

Dr Qais Aslam expresses concern on the overall policy for combating the threat of climate change. He says that the glaciers in the three great mountain ranges - the Himalayas, the Karakoram and the Hindu Kush, which is the most heavily glaciated area apart from the Polar Regions, have thinned, retreated and lost mass. "Deforestation in the country, especially in Sindh and Khyber Pakhtunkhwa, is at its peak, and river waters are getting polluted rapidly. No policy has been introduced yet to combat such a threatening situation."

Apart from combating climate change, he says there is no uniform education policy in the country. He says education and health budgets are miniscule. There’s a long way to go in obtaining gender equality, he says adding that there is no productive policy catering to daily wagers and homebased workers, and to fight poverty. "The current justice system is also incapable of dispensing justice", he says.

"The vision of our policy makers is defective as no single policy reflects the coherent approach to invest in generations to come," says Dr Aslam.