The economy in reverse

Manufacturing and agriculture have suffered during the past year. The PTI government blames the previous regimes for the slump. Whose fault is it really? 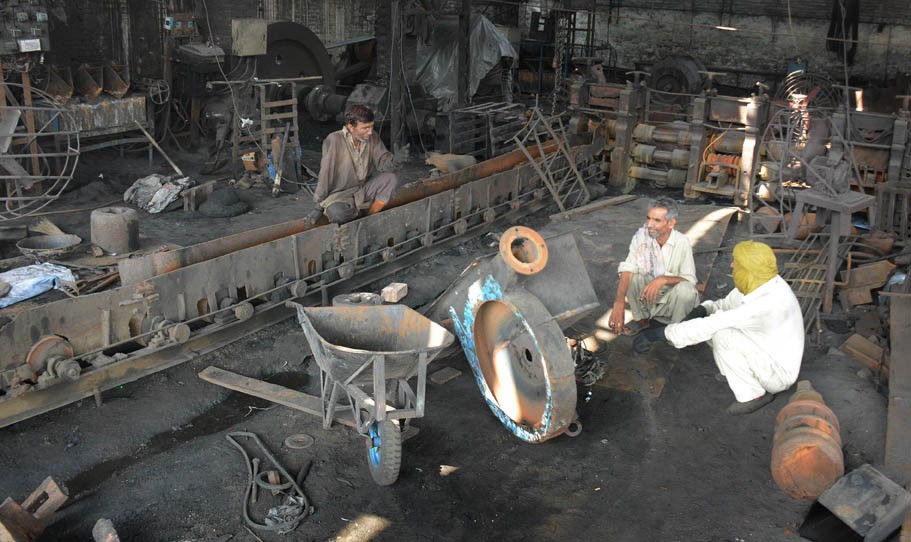 There are several reasons for this economic slowdown, including strict fiscal and monetary policies, reduced exports, budgetary deficit, an ever-increasing debt burden and debt servicing and an overall unsatisfactory performance by the manufacturing and the agriculture sectors. The government, which set goals a year ago to arrest the decline in various sectors, is struggling to achieve the desired results in the face of chronic difficulties. The current leadership holds the previous governments responsible for the quagmire in which the country’s economy is stuck.

Though all these factors are important, health of the manufacturing and agriculture sectors over the years and prospects of their growth in the near future need to be discussed clearly. This analysis is important at a time when the PTI government is completing its one year in power and is set to recount its successes and the challenges faced during this period.

There is no second opinion on the fact that manufacturing and agriculture are the backbone of an economy and trigger growth of other sectors such as transportation, finance, employment, energy, road infrastructure and so on. Unlike the non-performing sectors like real estate and stocks, where money remains within a few hands, the dividends of these two sectors reach a large number of beneficiaries and result in inclusive growth.

If we look at the Economic Survey of Pakistan for fiscal year 2019, we find that most of the sub-sectors of the economy, including agriculture, industry and services have missed their targets. The government has also missed the inflation, investment and savings rates targets which it set after coming to power.

Similarly, the agriculture sector grew by 0.85 percent during this period which is much lower than the target of 3.8 percent set at the beginning of the year. The under-performance of agriculture sector was mainly due to insufficient availability of water which led to a drop in cultivated area and a fall in fertiliser sales. There are other factors including low per acre yield of crops, lack of quality seed, absence of advisory and extension services by the agriculture department, want of world class agricultural research that affect agricultural output adversely. The fall in yield of cotton crop added to the woes of the textile sector which had to overcome the shortfall by importing it.

Mian Aslam Iqbal, the Punjab minister for industries, commerce and investment, admits that there are challenges. These include a drastic devaluation of rupee, dwindling forex reserves, lack of value-addition and industrial research, and export of basic items. He says the government is committed to overcoming these. Iqbal says that the government has discouraged unnecessary imports and is focusing on promoting export-oriented industries and import substitution for sustained economic growth. He claims that for the first time a production unit has been set up in the Punjab to produce glass used in windscreens. To date this glass has been imported for use in automotive industry, he adds. Iqbal says that several Chinese companies want to set up textile units in the Punjab. He says the government is insisting that they set up export-oriented plants. This will not just bring foreign exchange but will also create employment.

The All Pakistan Textile Mills Association Punjab secretary, Anis ul Haq, says the government has provided them gas and electricity at competitive rates which is a step in the right direction. Although, he adds, that the impact of drastic rupee devaluation and high interest rates is quite big for the industry to bear. Elaborating this point, he says the industry has put its modification and expansion plans on hold because it has no idea of the dollar parity at which they will have to place orders. The high interest rate is also a challenge because expensive bank loans make products uncompetitive, especially in the export markets.

Automobile prices witnessed multiple upward revisions due to rupee depreciation which discouraged potential buyers to book and buy vehicles. The source of income restrictions on purchase of cars further reduced the automobile demand. Similarly, pharmaceuticals suffered due to a delay in adjustments of prices by the Drug Regulatory Authority of Pakistan (DRAP). Lower sugarcane production and previous year’s stocks hampered the growth of sugar industry as well. The cement industry was another loser because it faced lack of domestic demand due to slow growth, low development spending and delay in launch of the government’s low-cost housing scheme.

The situation in the agriculture sector is also not good as crops witnessed negative growth of 4.4 percent during the current fiscal year. This is mainly due to the negative growth in important crops including cotton, rice and sugarcane. Their production declined by 17.5 percent, 3.3 percent and 19.4 percent respectively. However, wheat production posted a minor growth of 0.5 percent. The good news is that the domestic production of fertilisers during first three quarters of the fiscal year 2019 increased by 2.6 percent compared to the same period during the previous year. This increase was due to functioning of two urea manufacturing plants that were supplied LNG on subsidised rates.

In a move to boost agriculture sector, the PTI government has announced the launch of Prime Minister’s National Agriculture Emergency Programme worth Rs 309.7 billion. It mainly focuses on productivity enhancement of wheat, rice, sugarcane and oilseeds, conserving water through lining of watercourses, enhancing command area of small and mini dams in rain-fed areas, and water conservation in rain-fed areas of Khyber Pakhtunkhwa.

Khokhar questions the government’s decision to exclude cotton crop from this package while allocating funds only for boosting production of wheat, rice and sugar that are already in abundance. He says cotton feeds the textile industry, and edible oil sector, adding that its contribution to the exports of the country is above 60 percent. Despite its importance, he says, the government is not incentivising cotton growers who are now considering sowing other crops in the next season. "There is no support price for cotton in Pakistan even though competitor countries offer it to their farmers."

He alleges that this policy helps the powerful textile sector buy cotton - their basic raw material - at low cost. The sugar industry on the other hand, he says, is dominated by the powerful elite of the country who have managed to impose a 45 percent duty on the import of sugar. Unfortunately, he says, cotton can be imported with 5 percent import duty which makes it challenging for the local farmers.

The economy in reverse