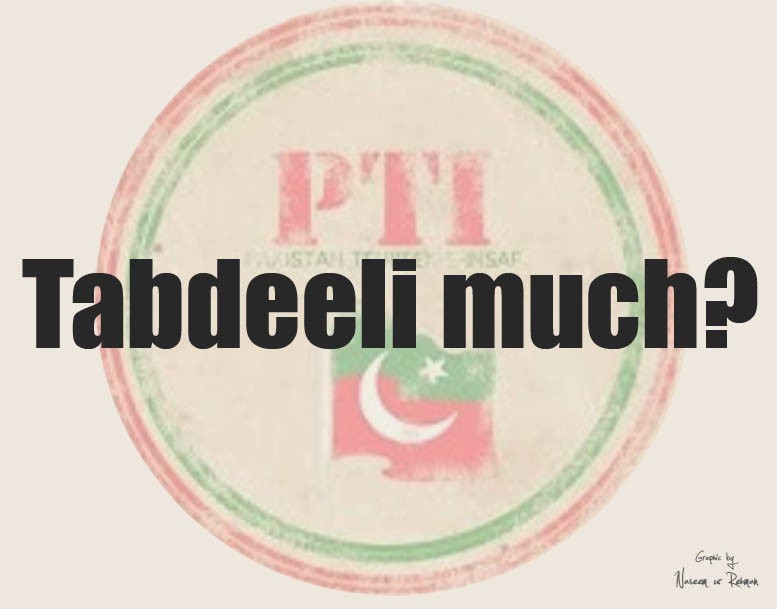 Even after a year in power, the Pakistan Tehreek-e-Insaf (PTI) continues to struggle with finding the right balance between the party and the government.

Major party office bearers have been changed twice in a year to give boost to the party, but in vain. Soon after coming to power, the prime minister appointed old guard Arshad Dad from Lala Musa, Gujrat as secretary general of the party. Recently, he has been unceremoniously replaced by former federal minister Amir Mahmood Kayani, who was allegedly dropped from the cabinet over corruption charges. Arshad Dad was on a trip to US to oversee arrangements for the Arena rally for Imran Khan when he was replaced without any notice or explanation. Some critics have said that if Kayani was going to be appointed to the important office then he should have been cleared of corruption charges prior.

It seems that Amir Kayani has re-emerged with the support of Aleem Khan whose position has been weakened after his arrest by the National Accountability Bureau (NAB). Aleem Khan once the Punjab president of the PTI, and right-hand man of Imran Khan, has been given a cold shoulder and consigned to political oblivion. After his release from jail, he has not been restored as a minister despite his many meetings with the prime minister.

Another powerful loyalist and a loud voice, Saif Niazi, has also re-appeared on the party horizon after a year although in political wilderness. For almost a year, he remained cornered within the party although in the past he used to belong to the most powerful lobby within the PTI. Now Niazi has been made party’s chief organiser by Imran Khan. He had earlier resigned from the post of additional secretary general over policies differences. It was then rumoured that the Jehangir Khan Tareen lobby had sidelined Saif Niazi. Soon after his appointment as chief organiser, Niazi organised a well attended party convention to prove that he remains a strongman.

Arshad Dad, the former secretary general, was a blend of professional middle-class values and military discipline. A Gujjar from central Punjab’s Gujrat district, he shared the constituency with the Pakistan Peoples Party (PPP) Punjab President Qamar Zaman Kaira. Dad’s family had long been diehard PPP loyalists. His father Brig Sahibdad Khan was a member of the Punjab cabinet in Zulfikar Ali Bhutto’s days. Dad has been a successful businessman running a construction company which built the Lahore Expo Centre, besides other landmark buildings. Dad was sent by the party to Turkey and China to study their political models, and organise the party using their best features. He had planned to make the party popular like Tayyip Erdogan’s Justice and Development Party (AKP) with an organization resembling the Communist Party of China.

Because of the loose party organisation, every worker is an opinionated leader. The only binding force is the leadership of the Kaptaan, Imran Khan.

Party old guards were of the view that in the event of challenge to democracy or the party from the powers that be, nearly 70 percent of party workers will stand by Imran Khan. The rest were thought to be "migratory birds", likely to change their nests according to the weather.

With the exit of Dad and entry of Kayani, the influence of parliamentarians will increase, and party workers will be pushed back. The party has grown inactive in the Punjab and workers seem dissatisfied and angry. The running joke among workers is that the only gain they can aspire for is a "selfie". So a selfie is the sole medal for their party work.

The Punjab party is clearly divided. There was a time when Jehangir Khan Tareen used to rule supreme. No more. With Tareen’s absence from active politics after the Supreme Court decision against him, his clout has gone down. Perhaps he is no longer taking as much interest in party affairs as he used to in the past. But he still is a powerful player. Governor Sarwar and Tareen don’t appreciate each other’s contribution to the party. The governor is also perhaps the only open ally of Tareen’s Seraiki rival Shah Mahmood Qureshi. The Sarwar-Tareen rivalry has been at work since the former became governor.  An objection to the daily iftar parties at the Governor’s House which entertained thousands of party workers was raised. It was alleged that lavish parties were being thrown at the expense of public exchequer. But the governor showed that not a penny had been spent by the government and that these were funded by his friends. Even Sarwar Foundation, the governor’s non-profit organisation came under severe fire, and he was left with no option but to step back.

At the grass roots level, the PTI is divided into parallel groups. It is perhaps the only party having as many factions as workers. Because of the loose party organisation, every worker is an opinionated leader who despises other workers. The only binding force is the leadership of the Kaptaan, Imran Khan.

As a local government minister, Aleem Khan, had a great plan to organise the party and identify a consensus leadership by holding local elections. But after his arrest and subsequent resignation from the ministry, the plan was shelved. The Pakistan Muslim League Nawaz (PML-N) had built party organisation through local bodies. It continues to accommodate its active workers in the local bodies set up. The strategy worked well for the PML-N. It might have worked well for the PTI as well.