Deep inside the Batu Caves

Does the future of historical sites now depend upon how Instagram-ready they are? 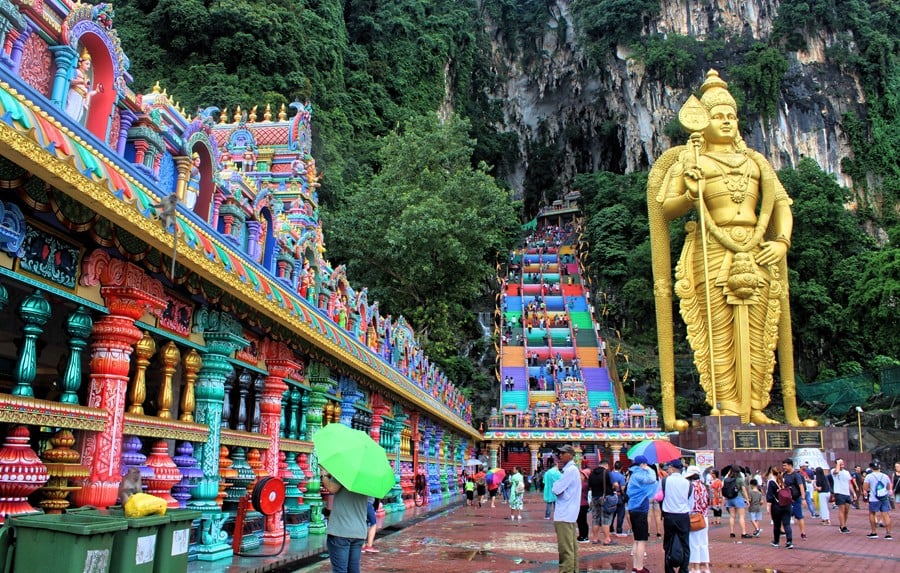 While planning a recent trip to Malaysia, one name leaped out from my computer screen.  The Batu Caves is a limestone labyrinth of caves and cave temples in the Gombak district of the state of Selangor. To me, this was a no-brainer. For while keenly drawn to historical sites - I have always been fascinated by temples. And the Batu Caves had it all: dating back some 400 million years, the cave complex is described as one of the most popular Tamil shrines outside of India.

Once in Kuala Lumpur, the adventure finally began. Sitting in the taxi, I could hardly believe my eyes as I caught a glimpse of the towering (140ft) gold statue of Tamil god Lord Murugan. The temple is, of course, dedicated to this Hindu god of war, who welcomes all who enter the cave; warning them of the strenuous journey ahead.

In order to reach the caves, visitors must be prepared to climb not less than 272 steps. This task is made somewhat easier by the different psychedelic colours that gleam from each set. And then, at the top, just outside the entrance to the caves is a Tamil temple; boasting more of the same. Thus the dazzling colours, the giant golden statute, as well as the animated monkeys that inhabit the area, offer a vibrant contrast to the limestone caves lurking in the background.

Yet looking up at the interminable steps that acted as a barrier to me and where I wanted to go - I kicked myself for not wearing appropriate footwear. Yet luck was on my side. The imposing statue and the lofty rock structure lend themselves to an important illusion. Namely, that the climb is longer than it really is. Imagine my surprise, therefore, when I reached the top in around 15 minutes.

Placing one foot in front of the other, my mind soon wandered. I began to think of the Hindu festival of Thaipusam. Every year, millions of Hindus celebrate Lord Murugan; either offering thanks to or paying penance for this important deity.

Devotees carry containers of milk, either in clay or brass pots held above the head or by shouldering the kavadi (a decorated structure bearing the image of several deities including Lord Murugan). The latter is attached to large skewers, with the sharpened ends piercing the skin, on the ascent.  I can’t even begin to imagine what that would feel like.

Once inside these magnificent caves, I was immediately struck by the sharp contrast to the outer portion. For, here, nature was manifested in all its glory; from the shape of the roofs to intricate rock formations.

Once inside these magnificent caves, I was immediately struck by the sharp contrast to the outer portion. For, here, nature was manifested in all its glory; from the shape of the roofs to intricate rock formations. Rays of light sneaking in through the gaps as well as the sound of running water give way to a sense of otherworldliness.  It’s therefore not at all hard to imagine why this location was chosen as a place of worship. Venturing further inside, man’s imprint becomes visible once more. Most notably, in the shape of the tiny Hindu figurines that adorn the walls; each telling a different story. There are also small temples. Here, religious leaders perform rituals that are open to visitor participation, too. And in an open admission as to how the holy have failed to be immunised against the spread of global capitalism - stalls selling souvenirs to tourists can also be found. Similarly, the hitherto plain concrete steps leading up to these hauntingly beautiful caves were infused with colour just last year in what appears to be yet another ‘trick’ to lure in visitors.

All of which begs an important question: does the future of historical sites now depend upon how Instagram-ready they are? Consider, there is no lake in front of Bali’s Gates of Heaven even though many social media influencers’ pictures suggest otherwise. This is because the latter choose to literally rewrite history by placing a mirror beneath the camera lens in order to give the illusion of reflection.

And once history is erased - what remains?

Deep inside the Batu Caves