Art as an imitation of action 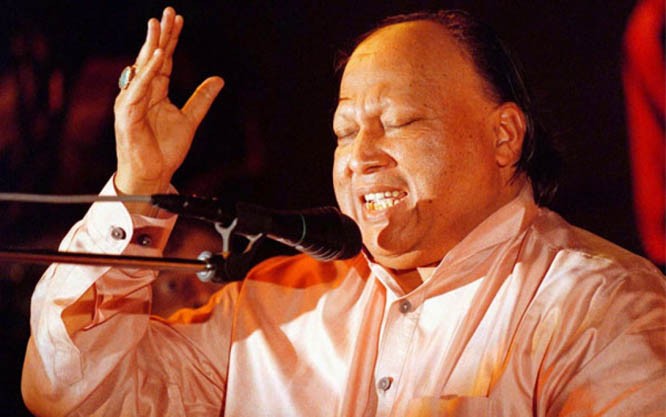 Among other things, Nusrat Fateh Ali Khan is credited with bringing about a certain kind of a mixing of the musical sounds from across cultures.

The influence of Western music in the Indian subcontinent during the colonial period was immense. The same could not be said of the influence of Indian music on the Europeans, particularly the British. This is understandable because learning was mostly one-way traffic from the mother country to the colonies. It was only after decolonisation that the Indian musicians started making an impact in the West. The names of Ali Akbar Khan and Ravi Shanker are taken foremost in this respect. They did a lot to make Indian music acceptable and even fashionable in the West. Their effort found happy coincidence with the counterculture movement and the efforts at finding deeper spiritual meaning in arts. In the 1950s and 60s the West’s materialist worldview was seen to have found a flip side and the music from the subcontinent was seen to be the mantra for salvation. Ironically, following their endorsement by the West the elite in both India and Pakistan, too, started looking up to these musicians as gurus. Otherwise, the same gurus had been seen as commonplace and not worthy of attention, except that paid to a mendicant, fakir or a good for nothing dropout.

Aristotle’s view of art being an imitation of action has generally ruled the canon. For if art is the reflection of what is happening in a society, its mediated understanding forms the arc of the entire scope of critical understanding of the arts. There is a possibility however, that the critical canon of art being a mediated reflection might not be holding true in contemporary times as a means of artistic expression too heavily comprise consequences of advances in technology.

Nusrat Fateh Ali was hailed greatly not only because he was a qawwal with a lineage but also because he opened some of the more insular forms of our artistic expression to outside influences, of the West. He was promoted as such by some of the biggest names managing the music industry. This helped him achieve a stardom that was international in its scope and essence.

The challenge nowadays is no longer bringing about a fusion of the sounds that may be more international in character and those that are local or limited to let us say a region. It is mostly about grappling with the new sounds produced by the technological revolution taking place around us. The revolution is all pervasive and music cannot stay aloof from it even if it tried.

Not very long ago all musical sounds were natural sounds -the human voice and sounds of the instruments made from materials like wood, reed, papier-mâché, leather, bronze, iron strings, gourds, reeds, shells, stones etc. Now the sound is produced not through natural means or through an instrument made from organic materials but in a digitised process.

So now the key question is not limited to being imitative of a form or a style or intonation. One must also judge the sound that is a product of a technological process and does not have the advantage of being processed or enriched through a cultural kiln.

Nusrat Fateh Ali was hailed not only because he was a qawwal with a lineage but also because he opened some of the more insular forms of our artistic expression to outside influences, of the West.

We know that all sounds; including the music sound are the products of some culture. There is no such thing as a sound that is universal in its character and stands independent of the process of being enunciated or intoned. Though there may be a certain system of notes, and their division and subdivision, the way a composition is sung or uttered is very culture specific. It cannot therefore be seen independently of the process it has evolved through. Can we say the sound in today’s music, that is being produced through a mechanical process, is free of the cultural baggage?

As time goes, increasingly greater interventions by technology are changing music making and in return changing tastes in music. In societies like ours, which take so much pride in natural sounds, both instrumental and vocal, the contradiction may appear to be stark. The use of the computer and digital sound has been increasing over the years. It has reached a level where the basic questions about the definition of creativity are being raised yet again.

Those associated with the music making deny a paradigm shift. They connect the algorithm to the programmer. An algorithm, they say, is much the same as any other tool. Using one is like using a piano. An illustrative example is a "live coder" who operates at an unusual intersection between computer science, electronic music and improvisational performance--interacting with algorithms in real time, altering sounds and beats by tapping commands into a computer. Quite often the algorithms do something quite different from what you’re expecting. It‘s much more like free improvisation in jazz or in our music. It is reacting to the unexpected and coming up with some reasonable response.

To a layman one would say music making these days is feeding upon   technological innovations and not just the reality of what is happening in the society which previously used to be an interplay of sex, politics, economics, family, religion and race or ethnicity. The mediated form, if any, will get noticed with its basis in technical generation of sound and not as the universals that constitute the structures of reality through their rarified form in the arts. Did Aristotle mean that the imitation of action would be imitation of mechanical generation of sound but still humanised or that the arts generally are an effort at humanisation of all inventions? Is this what he meant by imitation in the arts.?

Art as an imitation of action