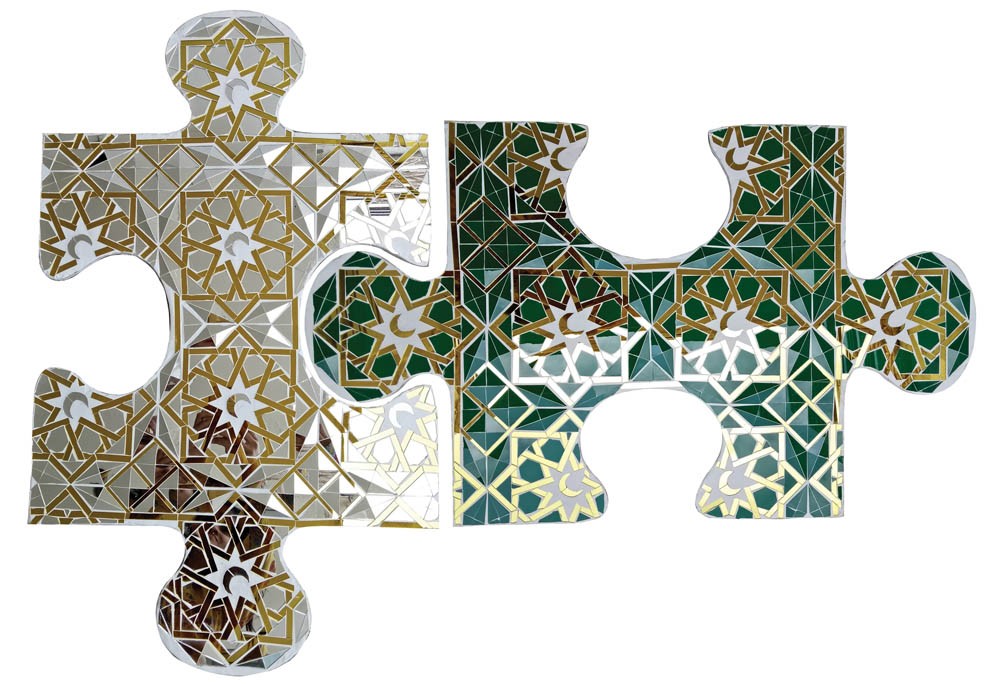 One hopes that the 62 artists, participating in the exhibition Pakistan @100, would continue to work for the next 28 years. It’s not an odd wish. Almost all of them are young. Some are recent graduates.

What they produced in the show, curated by Zara Sajid for the World Bank Group and the Department for International Development, is supposed to be a futurist vision: Islamic Republic in 2047.

Human beings have a strange tendency, to not entirely live in the present. Often, they either live in the past or dream of the future. Recollecting memories, reconstructing personal histories, revising their lives, refurbishing their portraits of their ancestors and collaborating to change the past of a nation. They engage with the future to transform it, imagining a shift in their conditions in coming years, dreaming about better scenarios in the private as well as the public sphere.

It has become a norm to answer questions about the dire state of a community today by invoking tragedies of the past or projecting future plans. Never addressing the problem at hand.

An art really. Because art removes us from the present realities and presents a different version of the past or an unusual layout of the future.

However, there is a difference between a politician and an artist. A politician may manipulate history as well as the future to manufacture a perfect ideological entity. An artist, however, doesn’t necessarily follow this course. One comes across works of art in which the past is questioned and portrayed with ruthless scrutiny and ultimate honesty, deconstructing some of the most revered figures and episodes in its course. Then there are also works that foresee and foretell the fate of a nation, humanity and planet that are often bleak.

A similar reading is available in the 95 works from the exhibition [email protected]. Some participants employ familiar references to denote their ideas about the country, and its future, while others prefer an indirect language, relying on a symbolic mode in their comments - and critiques. However, in both choices, one finds a number of works, which offer interesting solutions to the challenge of 100 years.

If one can prefigure those 100 years (as artists have tried to do), these would be one hundred years of multitude. In several works, the future is painted in the dominant hue of diversity. For example, Zoha Zafar’s Snap reveals a scenario constructed with contradictory elements. Religious symbols, signs of technology (including nuclear energy), and images of history (like a Pharaonic bust) are juxtaposed with forms from popular culture, rather the objects of mass marketing. Projecting a future that is more inclusive, yet more commercial and industrial.

Industrialisation in its aftermath has resulted in a global crisis. Of environment. Plastic. Industrial rubbish. Drastic upheaval in seasons. Kiran Saleem envisages this aspect of ecological nightmare in her Untitled, with a goldfish inside a plastic bag filled with water. A metaphor for human existence in the future, with looming threat to animals, sealife, plants and mankind. Her meticulously painted canvas, reaffirms that an artist can communicate a grim tale in tones of gaiety. The subtle shades of blues separating background from transparent mass of polythene bag containing water are a treat.

Art removes us from the present realities and offers a different version of the past or an unusual layout of the future.

A similar approach is observed in two canvases by Saba Haroon. In Disenthrall I, a young girl is surrounded by a pair of origami cranes. Likewise, in her other painting, Disenthrall II, a girl is holding the same bird -- again a paper origami. Inspired by a Japanese legend, the work revolves around a dichotomy of hope (future) and hopelessness (present).

Interestingly, some artists belonging to the older generation (Abdul Jabbar Gull, Masood A. Khan) have relied on their familiar techniques and tactics. A number of younger participants have contributed works which they displayed in their degree shows, or have been exhibiting regularly at various venues. Only a few dared to think out of the box, and approached the theme, an interesting and inspiring concept, in a creative manner. The hesitance of several artists, to abandon their current practice in favour of an unexpected image, is in accordance with the general behaviour of the society, where a change -- any change -- is unimaginable, unacceptable and unmanageable. It signifies not the lack of imagination but the reluctance to give free rein to imagination.

A few artists have used obvious visuals but transformed them into something new as well as relevant. For instance, four maps of Pakistan, titled Of Unknown Origins by Rubab Peracha. Separate sections of maps drawn with dots suggest sites of important incidents, such as explosions, or crime spots, published in an English newspaper. Seema Mangi has composed the entire map with pillows of different patterns and colours. Originating in the artist’s personal interest in sleep (as witnessed during her degree show, 2017), this can be understood as a metaphor for a society, which prefers to snore than to strike the needed blow.

The next best motif associated with the identity of Pakistan is the green flag, with a crescent and a star. Two artists who graduated last year have approached this apparently exhausted source with impressive energy. Fawad Jafri has created paintings, Jinnah’s Wish and Equality Prevails, that echo the aesthetics of Op Art, but signify a larger content -- of a political observation. In both the canvases, the green area moves and merges with the white part - without leaving a distinct or definite line, dreaming and desiring a comfortable coexistence of the Muslim majority with the minorities in future Pakistan.

Similar content is constructed by Rabbiya Ilyas in Gather Together, comprising two pieces of a jigsaw puzzle, one green and the other white that fit into each other. They realise and remind us of the necessity to have plural views in a society. A difference of opinion is not a damaging factor, but a positive point, as it protects societies from extremism and narrowmindedness.  Her choice of material, mirror on wood and plaster, accentuates this meaning, since due to lights and reflections, the green mirror hardly remains a slight tint of green, and white is not purely white -- both share shades of each other.

As the exhibition was inaugurated on the eve of August 8, 2019 at the World Bank office in Islamabad, one speculated the bright, glittering and attractive future (like the surface quality of Rabbiya Ilyas’s artwork) of Pakistan and feared the onslaught of bigotry and exclusiveness in the name of faith and ideology. In that confusion, one identifies with the painting of a one rupee gold coin, 100’s Wish by Sundeep Kumar, that portrays the artist’s "aspiration for our currency’s value to be restored by the time it is 100 years old". But somehow the profile of the Father of Nation (above the date 2047) appears to be perplexed. Probably Jinnah was able to visualise Pakistan -- of not 2047 but of 2019!