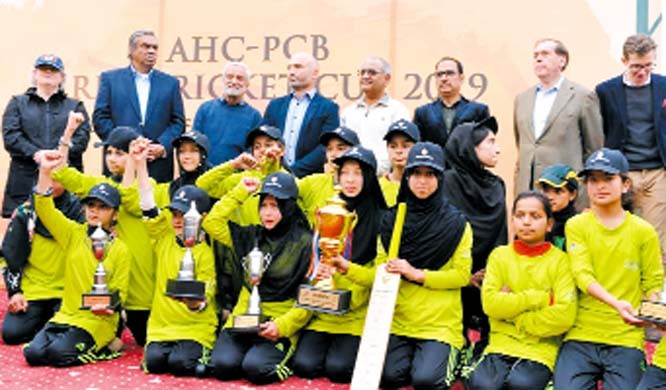 It was nearly five years ago when at a get-together, the  then Australian High Commissioner, Peter Heyward, his wife Susan, discussed with me organsing a cricket event, featuring underprivileged school girls in Islamabad region.  The wholehearted support from the Australian High Commission, Mr Aziz Boolani, CEO Serena Hotels, and PCB paved the way in successfully organising the first event at Saidpur Village cricket ground.

Over the years this support has continued. The event, now branded as PCB-AHC Girls Cup, has become a very potent platform.  I call this event "Girls Empowerment through Cricket".

Since the inception of this event, ten schools have taken part. The format of this event includes five days of coaching conducted by female coaches within the schools and a competition day at Saidpur village cricket ground. The winners qualify for the next year; the remaining schools continue to get cricket equipment as and when needed. To support Special Girls, National Special Education Centre for Hearing Impaired Team is invited to play every year.

On the competition day, the venue gave a festive look, with banners from sponsors and a good number of supporters of participating schools. It was nice to see members from the diplomatic community coming over to support all teams.

A very positive outcome of this event has been the growing number of volunteers. This year Canadian High Commission donated playing shoes to the four participating teams. Richard Yates from British High Commission did a wonderful commentary, keeping the spectators involved in the event.

There was a keen contest among the participating schools. Here one must compliment the girls team with hearing impairment; not for a moment did they let their disadvantage come in the way. They played well, showing  complete understanding in running between the wickets and  were most vocal when cheering their teammates.

Mashall School won the championship, beating Islamabad Model College for Girls I-9/1 in a thrilling final.

Sakina Bibi from Mashall School was declared player of the tournament. This was the second time she won this coveted prize. It was very nice of Chairman PCB Ehsan Mani to grace the occasion as chief guest and give prizes to the girls.

At the onset of this project, I found th girls very shy. Most of them had never worn a cricket outfit. They had never played in a ground before. Over the years, I found a very positive change in the players. They are now very confident. Competing in cricket has raised in them a desire to achieve something in life. Some of the girls who had never told their parents of playing in a ground watched by male spectators are now confident enough to invite their parents to watch them play. They have got all the benefits of team sports. They have developed leadership skills, are able to work as a team, their communication skills have improved and they have learnt to respect others.

There were very good individual performances from girls with hearing impairment. Iqra was declared the best batter of the tournament. Aqsa won the best fielder award. Aneela won the best player of the competition award. Communicating in sign language, she remarked, "We are very confident now to play matches with other schools. Our players performed very well and we will practise hard to win the next event."

Zarba Awan from Pakistan Sweet Homes is a 13-year-old orphan. Talking about her experience of competing in this event, she remarked, "I have never felt so confident, energetic and happy. It would be great if we got more such events."

Sana Ashiq from Pakistan Sweet Homes, who too is an orphan, remarked, "I have never felt so excited in my life. Being selected to play for our team has given me a world of confidence."

It was very encouraging to talk to girls from Mashall School.

Talking of her experience, she said, "This annual event has enabled me to play cricket at a competitive level. It has boosted my self esteem. The girls are supportive, knowing they all come from challenging backgrounds."  She considers herself to be fortunate. She has a conservative background, but her parents permitted her to play cricket. "I thank the organisers for changing my life," she remarked.

Fizza Bibi, 15, studies in class 8 and belongs to Skardu. Her father works as a cook. Fizza was one month old when her mother passed away. She took up cricket only a month back but her leadership skills are obvious. She finds it hard to convince her grandmother to let her play cricket, but she is determined to be an achiever and make a name in cricket and studies.

It was vert heartening to know from Zeba Hussain, Director Mashall School, that participation in sport activities has not only made the girls more active but has also improved their academic performance. This year the school’s result has been great. One important step to enhance the confidence of these girls manifold, she suggested, would be to have more matches between underprivileged schools and the mainstream institutions. This will make the game of cricket in Pakistan more inclusive.

In times to come one is sure that more organisations will support this initiative as we are a very caring nation and just need a bit of structure.