When the first atomic bomb was dropped

A somber ceremony in Hiroshima recalls the horror of the first atomic bomb. A passionate appeal is made to the world for the restoration of peace and nuclear disarmament 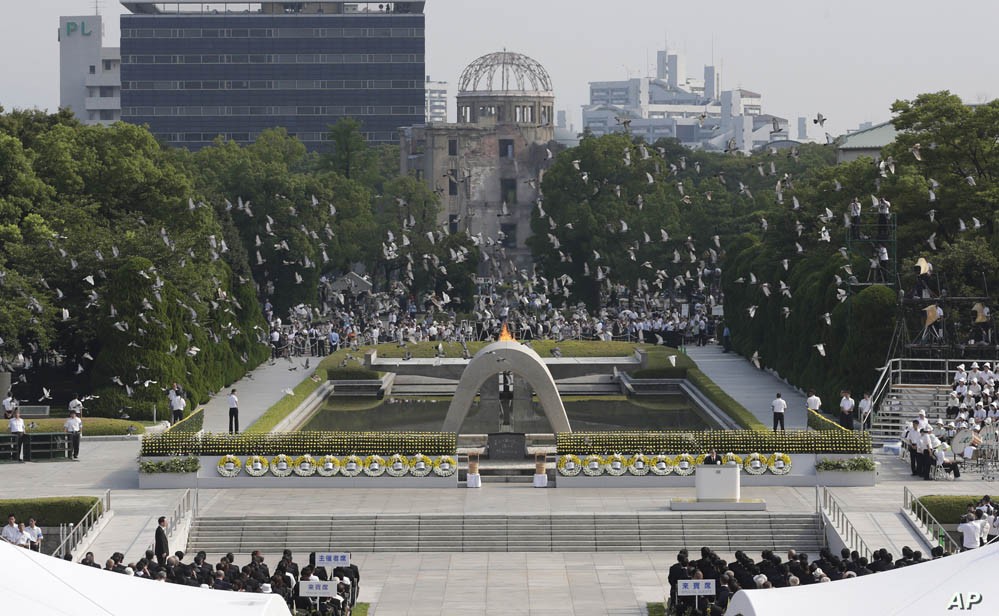 We had to get up at 5am on the morning of August 6, 2019. By 6am we were on the road and driving towards the Hiroshima Peace Memorial because the roads were expected to be crowded, as over fifty thousand people were expected to attend the ceremony which has been held every year since that fateful day when the first atomic bomb was dropped over Hiroshima. Once at the ceremony ground, we found registration extremely well‑organised, not only for people like me who had the privilege to access the press enclosure, but also for those who had come from educational institutions from across Japan.

There were hundreds of elderly people -- the survivors called hibakusha in Japanese -- who needed extra care to be guided and settled in their chairs. There were volunteers all around -- both young and old -- ready to hand out free water bottles and napkins. With thousands of people in rows of single file, there was no pushing or shoving; no shouting or display of anger, no hurry to step over. Calm and quiet prevailed as if everybody had been trained for the grand gathering.

It was no doubt the most organised gathering of thousands of people I have attended or seen in my lifetime. Once we settled down, an amazing choir of school children started playing solemn music. The ceremony was yet to start but the music which was well‑tuned to the ears of both younger and older audiences was playing in the background. There was many such musical offerings. These added to the sobriety of the event on this lovely morning. I was thinking about the day 74 years ago when right where I was sitting a huge tragedy was about to happen.

At around 7:40, Prime Minster Shinzo Abe arrived along with a couple of guards who neither displayed any weapons nor made his arrival too spectacular. The PM bowed in front of the memorial, then turned towards the seats of the hibakusha and bent his head again, and then did the same to the wider audience. There were no VIPs to gree him with garlands and no obsequious minions around him. He sat on an ordinary seat in the front row and listened to the music.

At exactly 8am, as announced earlier, the ceremony got going. First, there was a dedication of the register having names of the fallen victims of the atomic bomb. This dedication was led by the mayor of Hiroshima and the representatives of the bereaved families. The activity was done in exactly three minutes as per the schedule. There was a master of ceremony (MC) away from the stage and close to the press enclosure. He had a digital clock in front of him not visible to others. If an activity finished a couple of seconds earlier than the schedule, he waited looking at his clock for the right time to announce the next activity.

At 08:03, the chairperson of the Hiroshima City Council, Haruo Yamada, was invited to address the audience. His address set the tone for the day. He reminded the audience how 74 years ago the first atomic bomb used in human history reduced Hiroshima to rubble in the blink of an eye and ended so many lives. He recalled how the invisible radiation inflicted long‑term suffering on many, and continues to do so to this day. He pointed out that confrontations arising from mutual distrust among nations and the recent international situation surrounding nuclear weapons has plunged the world once again into a state of instability.

He finished half a minute earlier than planned, so the MC waited for before announcing the dedication of flowers by the mayor of Hiroshima and the representatives of the atomic bomb survivors. It was a moving sight as the average age of survivors is now 82 and many are well into their nineties. Looking at these people -- some on wheelchairs -- offering flowers to the victims’ memories moved many to tears. Here were the people who had survived the most vicious attack on humankind and still had hope in their eyes that the world would move away from the nuclear race.

At 08:16am, the mayor of Hiroshima, Matsui Kazumi, read the Peace Declaration in which he drew our attention to the world today. He saw a self-centred nationalism in ascendance with tensions heightened by international exclusivity and rivalry. He urged the world to move forward with nuclear disarmament.

Then there came the momentous time, as it was exactly at 8:15am, when 74 years ago the bomb exploded almost half a kilometre above people’s heads. When the clock struck, everybody stood in solemn silence for a minute. I closed my eyes and felt an enormous flash of blue and red light hovering around me, followed by a deafening blast. I tried to imagine how within seconds a temperature of more than 4000 degrees Celsius melted everything within a circle of five kilometres.

At 08:16am, the mayor of Hiroshima, Matsui Kazumi, read the Peace Declaration in which he drew our attention to the world today. He saw a self‑centred nationalism in ascendance with tensions heightened by international exclusivity and rivalry. He urged the world to move forward with nuclear disarmament, which is actually going in the reverse direction. He didn’t name North Korea but clearly highlighted the worsening situation in that region by North Korea’s incessant missile blasts and nuclear threats. He read the following lines quoting an eyewitness of the atomic aftermath:

"They were nearly naked, their clothes burned to tatters, but I couldn’t tell the men from the women, Hair gone, eyeballs popped out, lips and ears ripped off, skin hanging from faces, bodies covered in blood -- and so many." He urged the audience that, "We must never, ever allow this to happen to any future generation. We are enough." He also quoted Mahatma Gandhi as saying, "Intolerance is itself a form of violence and an obstacle to the growth of a true democratic spirit." How true. If only India today could act on these principles.

Then at 08:20, we witnessed a most spectacular scene -- the release of doves. There were hundreds -- or perhaps thousands of doves -- brought to the ceremony and released into the sky. As they fluttered their wings and embraced their freedom, they thrust themselves upward and then started circling the Peace Park where the ceremony was being held. In droves they moved up and down and presented a sight to behold. As their numbers increased, some of them moved away, but many could be seen flying around till the evening.

At 08:24, two representatives of the children of Hiroshima recited their commitment to peace. And then it was the prime minister of Japan, Shinzo Abe, who made a passionate appeal to the world for the restoration of peace and nuclear disarmament. He sounded like a genuine promoter of harmonious coexistence not only in that region but also around the world. As the leader of a nation that has suffered so much on account of nuclear weapons, his appeal carries a lot of weight, only if other countries in the region, especially North Korea, will listen and understand.

After the ceremony, there were numerous activities for the day in the International Conference Centre of Hiroshima. There were free guided tours of Peace Memorial Park; and there were recitations of memoirs of the atomic bombing, with various presentations throughout the day.

Finally, atomic bomb survivors shared their testimonies with the audiences in different rooms of the centre. The day concluded with the Peace Message Lantern Floating Ceremony held from 6pm to 9pm.

When the first atomic bomb was dropped