Cat in the newsroom 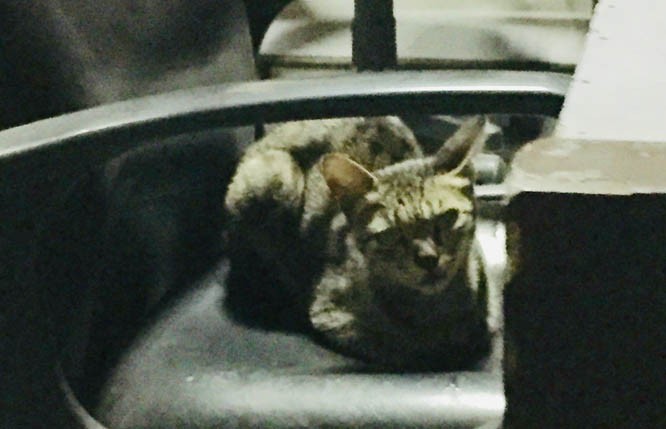 Whenever she walks past, I make a big show of stretching out my paws before engaging in a feline take on a downward dog. Showcasing the full glory of my grey coat; patterned with an intricate matrix of black stripes and spots. As if I am the son of all the big cats rolled into one. Yet forever safe from the poacher’s gun. For, if truth be told, no one pays attention to the likes of me and my kind.

Being a kitten in the newsroom, I have done rather well for myself. Others have been less fortunate. And while this kind of work is not ideal -- given the question of labour right violations for which the fourth estate has become known -- it fulfils an immediate purpose. Namely, dismantling the stereotype that casts us strays as flea-ridden scavengers that have no place in impolite society. Thus we are labelled feral. When everyone and their furry friend knows that we are domesticated. Albeit homeless.

Such prejudice is infuriating. Our erstwhile colonial masters embrace Larry the Cat; Chief Mouser to the Cabinet Office, who is now breaking kibble with the third prime minister to serve under him. That’s what I call progress. Especially for a country that has long traded on outdated notions of fighting for the underdog. And speaking of our canine brothers, the movement will never forget the dues paid by Dot and Buddy, who did their utmost to present the plush face of Pakistan. As the poster-dogs of Enlightened Moderation, their paw-prints were all over the decree issued in the early years of the Musharraf regime. The one upholding the existing ban on bear baiting. Sadly, though, these two national security assets didn’t manage to win much for us paw-soldiers. Despite their very own top dog unabashedly applauding other lands for treating non-pedigree chums with compassion. A timely reminder that revolution is always a bottoms-up affair. Chin-chin.

The tale of how I landed up here is not one to be revisited. Suffice it to say that my mother sought refuge among those who are wont to hold the front page. It has been hard to block out what happened to her and my siblings. But the show, as they say, must go on. And so, in between instructing sub-editors as to the difference between a cat and a comma, I keep abreast of the real news. That the state is narrowing the breathing space in the freedom of expression realm has prompted the media to assume the role of civil society activism. All of which is good news for me. Meaning that I can keep an ear to the ground and one paw on the pulse. Indeed, we have already begun to mobilise, my furry comrades and I.

In a newsroom across town, my sources tell me that rats have already taken over operations. A silent coup if you will. The best part is that everyone is in the know; bending over just like those civvies who masquerade as democracy’s custodians. But where political leaders fear to tread the animal kingdom does not. One of our very own com-cat-riots visited that bureau, after hours, and held a kitchen-meeting with her rodent counterparts. The one-point agenda: devising ways of reclaiming man-made space. To remind proclaimed offenders that it’s our world, too. Because this is something that people conveniently forget. Even the liberal voices of Pakistan and all their hangers-on can be heard justifying the oftentimes violent paw-to-mouth existence of those of us who are renditioned from our natural habitat. Professing to put our welfare first, they argue against confinement on the grounds that all creatures great and small are born free. Yet there is no checking of privilege. No holding themselves to account for the wanton degradation of Mother Earth.

Such contempt, however, only strengthens our resolve. And we stand in good stead. Not least because we aren’t averse to joining paws for the greater good. Forming cross-species alliances. While the usual suspects continue to bicker over who is Muslim and who isn’t. Really, we could teach them as much about humanity. If only there was a willingness to listen.

Here she comes again. So, I must now temporarily beg your leave. Time for a half-hearted attempt at some ferocious hissing. All part of a cunning bid to have her notice me. In this, at least, I am successful. For stopping and crouching down low to talk to me, she is full of compliments. About how luxurious my fur is; my jewel-like eyes. If I’m honest, I’ll take what I can get. You see, for all my bravado, I would happily scurry away from the revolution. All for the chance of a loving forever-home.

It’s hard being a cat. Here in this city. Lahore.

Cat in the newsroom