What goes into rearing of sacrificial animals carrying price tags of hundreds of thousands and who are the loyal buyers? 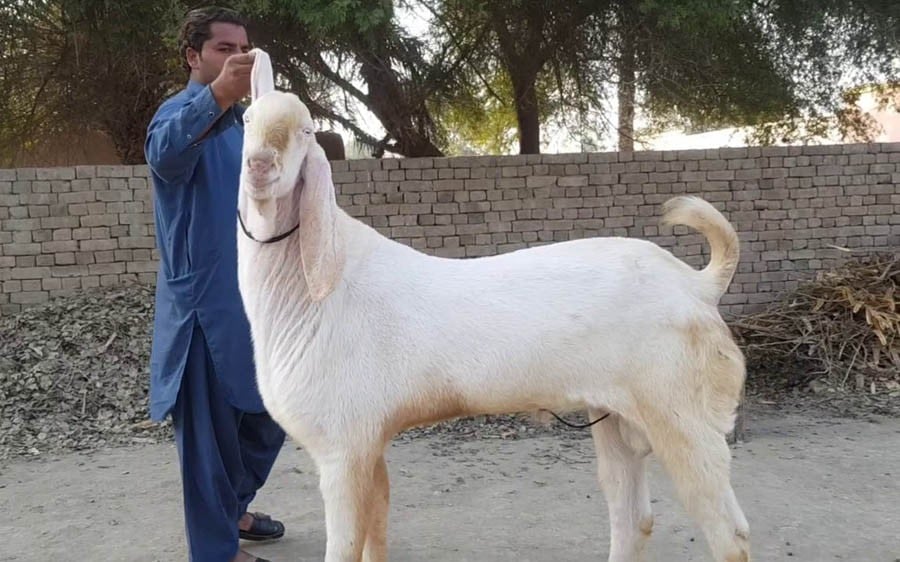 The scene at the Cattle Market in Shahpur Kaanjran was nothing if not interesting. The narrow sandy path to the Market was blocked. People stood there in hordes, busy haggling with the sellers of sacrificial animals. Commuters riding bicycles and motorcycles were constantly yelling for the path to be cleared but to no avail. Apart from prospective buyers, there were many spectators. Their only interest was to see who walked away with which animal -  and what price they paid.

Now is that time in the Islamic year when people buy sacrificial animals to fulfill their religious obligation on Eidul Azha. However, in markets especially set up for the sale of sacrificial animals, prices are rising, to a point previously unimaginable. For a frail goat, you can expect to be asked for anywhere between Rs30,000 and Rs100,000. The reason often given for such exorbitant prices is the "healthy diet" of these animals -  mainly milk, almonds, nuts and fruits. Quite often though, the physical condition of these animals betrays such claims.

Some animals do justify the high price tags they come with. But they are few and far between. Such goats and cattle are bred keeping Eidul Azha in mind when people are generally willing to pay a premium for their desired sacrificial animal.

This week The News on Sunday (TNS) looks at the activity surrounding sacrificial animals throughout the year, starting with their birth and adoption by farmers till when they are put up for sale at Eidul Azha. We also take a look at the economy of this yearly trade.

Ghulam Qadir, a seller from Rajanpur, tries to explain this phenomenon. "You can see how people are glued to my stall. The majestic look of my goats has mesmerised them regardless of whether they can afford them or not." He says this while pointing towards a herd of pure white goats of extraordinary height without a single spot on their body. His confidence is obvious, as he negotiates the price of two of his goats with a prospective buyer, each priced, Rs200,000. He is not willing to budge an inch.

The breed he is dealing in is called Beetel/Nukra or Rajanpuri Bakra. These goats are not kept in barns; instead, they are treated like family members and allowed to move freely. They are given charpoys to sit on and fed expensive food including almonds and milk. In a typical rural household in Rajanpur, at times nutrition needs of children in a household may be compromised to ensure these goats get their fill of expensive feed, says Qadir.

Amid several visitors to Qadir’s stall who only inquire about the price and inspect the teeth of goats to verify their age, there is eventually a buyer who shows serious interest. He stretches a handful of crisp Rs1,000 notes towards him. Qadir secretively counts the money. Once the buyer agrees to pay another Rs10,000 for the animal, the deal is struck. The sale price is not disclosed to the admiring public as word spreads like fire often forcing the sellers to bring their prices down.

Ahmed Ali, who bought an expensive goat from the cattle market says he made this purchase only on the insistence of his wife and daughter. He says once one buys an expensive animal one has to keep doing it every year. "If you don’t, people will speculate about your financial situation." According to Ali this perception can harm his professional reputation as most people only want to deal with businessmen whose financial condition is stable. Of course there are others who think that only the top breed animals are worthy of being sacrificed on Eidul Azha.

Qadir rears Beetel/Nukra commonly known as Rajan Puri in local language. The average weight of a goat is 55kg. In some cases, their weight might surpass 80kgs making them worth Rs 200,000 or more. According to him "two kilograms of milk and two kilograms of grain concentrate (Wanda) is given to these animals daily so that their target weight is achieved. Alfalfa grass with husk is another staple." He adds that these goats are given almonds and grams for breakfast and desi ghee for lunch. They also have to oil their skin, hooves and horns and take them for long walks for their physical development.

Another goat seller, Muhammad Ibrahim, a resident of Rahim Yar Khan, says they bring 500 to 800 goats of various breeds because people here have a great liking for goats. Karachi has a ready market for bulls and cows.

Asif Sahi from Punjab Live Stock Department says that proper feed is not the only determinant of ideal growth and weight of sacrificial animals. Sometimes, he warns, overfeeding can cause complications. He says to achieve the desired weight scientific methods are now being used extensively. He says a common practice is to inject a cultured sperm into the womb of a female goat in order to get a healthy baby goat. Animals born this way are far superior to those born through normal mating.

Sahi says a large number of farmers are still not using artificial insemination for breed improvement. He says that farmers are not trained in this field and do not have the required knowledge to conduct the process. "There are different breeds of goats for milk production and meat purposes but we seldom appreciate the distinction," he says. The second kind has high meat-to-bone ratio and must be bred in abundance, he adds.

Dr Sajjad Sanghi, the Veterinary Research Institute (VRI) director, says there are about 36 types of goats in Pakistan. Some of them are naturally gigantic in size. It is for these breeds that people are willing to pay hundreds of thousands of rupees. He says that the Beetal breed is loved for its beauty, colour and height.

"In my experience, it is the Beetel/Nukra breed of goats that cattle farmers should mainly invest in", says Qadir. "These goats are most suitable for meat purposes, are available abundantly in Pakistan, the returns are high and customer satisfaction is guaranteed as people love this breed here", he concludes.