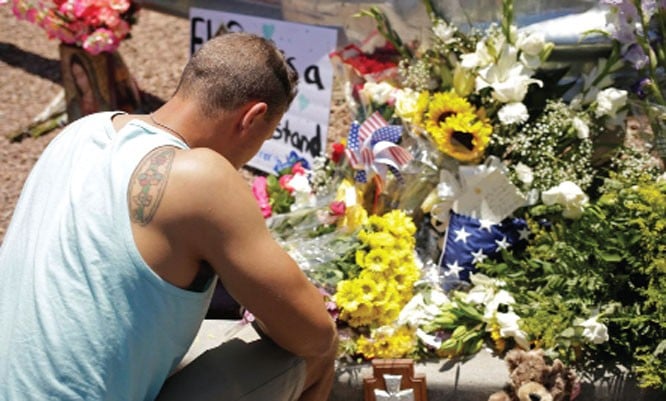 These past few days have brought about horrifying news as two mass shootings in two disparate corners of the United States (US) transpired merely hours apart. The first occurred on August 3 in El Paso, Texas where a gunman opened fire in a Walmart, killing 22 people and injuring 25. Shortly before the El Paso shooting, a hate-filled, anti-immigrant manifesto was found online on the website, 8chan, which is being investigated by authorities who believe that the shooter had posted it. The second incident took place the next day, in Dayton, Ohio, Oregon district where a gunman shot down 9 people including his sister and wounded 14 others. Another recent shooting which evoked strong emotions from across the globe was the tragic Santa Fe High School shooting of May 2018, wherein two teachers and eight students were killed, including an exchange student from Pakistan named Sabika Sheikh.

These incidents are the latest examples of a mass-shooting epidemic which has plagued the US for many decades. Several factors including mental illness and childhood bullying of the perpetrators have been cited as contributing significantly to this worrying trend. However, it is pertinent to note that an overwhelming majority of mass shootings in the US have been carried out by young white males inspired by racist and anti-immigrant hate speech. Both Patrick Crusius (the El Paso shooter) and Connor Betts (the Dayton, Ohio shooter) shared these attributes. The former allegedly penned a seething 2300-word manifesto which opposed immigration, describing his attack as a ‘response to the Hispanic invasion of Texas.’ The document, which has since been removed from the internet, blamed American corporations for the unbridled illegal immigration into the US. The writer continued that immigration has resulted in Americans losing jobs to ‘invaders who also have close to the highest birth-rate of all ethnicities in America.’ Lastly, the anonymous document being linked to Patrick Crusius chillingly stated ‘if we can get rid of enough people, then our way of life can be more sustainable.’

Unsurprisingly, the language used in the manifesto mirrored the rhetoric of US President Donald Trump, who, well before being elected to the office, lambasted previous US governments for allowing illegal immigration and vowed to ‘build a wall’ on the border between Mexico and the US. Beto O’Rourke, a Democratic presidential candidate who has represented El Paso in Congress, blamed Trump for sowing the kind of fear and negative reactions that were witnessed in the El Paso shooting. Right-wing politicians in the US have largely, polarised the country by painting minority religious and ethnic communities as being responsible for unemployment, drug trade, crime and terrorism. No wonder then, that members of ultra-right groups are emboldened to spew foul racial slurs at Muslims on the streets or that white men in their teens and early twenties are inspired to kill innocent people in schools and grocery stores.

The US mass shooting epidemic is not entirely inexorable. However, to prevent the occurrence of more tragedies, the gun problem in the US must be acknowledged. Mass shootings are more prevalent in the US owing to the fact that guns are much easier to obtain in the country, due, largely, to a very powerful gun lobbying nexus led by the National Rifle Association (NRA). Research into the mass shooting phenomenon has brought about damning evidence that gun prevalence is inextricably linked to gun violence. Data collected by GunPolicy.org shows that there is a direct relationship between the percentage of adults who own guns and gun-related deaths in US states; states like Arkansas, Idaho and Alaska which have a very high proportion of adults who own firearms, suffer between 13 and 20 gun-related deaths per 100,000 residents each year.

Mental health research also refutes the claims of proponents of gun ownership who blame the mentally ill for most homicides in the US. Michael Stone, a psychiatrist at Columbia University has pointed out that of his database of 235 shooters, only 52 (22 percent) were mentally ill, making it entirely fallacious to brand the mentally ill as being responsible for the epidemic.

Like the US, Australia used to suffer countless gun-related casualties every year. Australia has nearly ended gun-related deaths by imposing restrictions on gun imports and using highly successful federal gun buyback schemes to reduce the number of firearms owned by the general public. Following the Christchurch Mosque shooting in which 50 people were killed, the New Zealand government is enacting its own strict gun laws to prevent another tragedy. Perhaps the US could also follow Australia’s lead and forego its citizens’ desire to own firearms in order to ensure the safety of hundreds of Americans who would otherwise perish at the hands of an armed yet misguided youth.

While politicians will continue to polarise the masses in order to ensure electoral successes in the 2020 elections in the US, some damage control can be done by preventing the next radicalised shooter from having access to a gun in the first place. Despite the strong monopolisation of gun politics by the NRA, some small successes do trickle through for gun control activists; the US recently passed the ‘Sabika Sheikh Firearm Licensing and Registration Act’ in honour of the young Pakistani exchange student who was killed last year.  The bill introduces a comprehensive process for the licensing and registration of guns in the US and could be a watershed, ushering in more bills that could successfully curtail gun ownership in the country. Sabika Sheikh epitomised the multicultural and generous nature of American society. She also serves as an example of the loss of precious lives to gun-related incidents and mass shootings. All of this begs the question: How many more innocent lives must be lost before tangible steps are taken by the US to end the bloodshed?