Gradual, irreversible thaw in Gilgit-Baltistan’s glaciers underscores the urgent need for Early Warning Systems and tapping into the indigenous knowledge of mountain communities 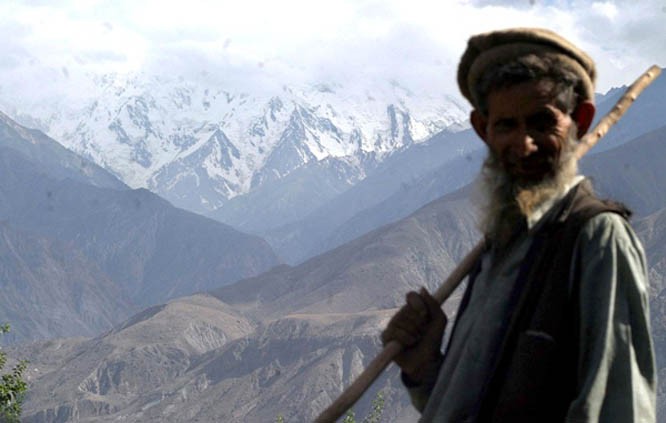 The recent uptick in natural calamities indicates a pattern that the country’s coastal areas of Sindh and Balochistan are in trouble from storm surges and sea-level rise and that the Punjab plains are facing the threat of floods, disease and climate-hardy pests. Similarly, the already fragile geological formations and ecosystems of roughly 8.5 percent of the mountain areas are degrading quickly because of both natural and anthropogenic drivers of change.

Various studies suggest that with 7,253 known glaciers, including 543 in the Chitral Valley, there is more glacial ice in Pakistan than anywhere on Earth outside the polar regions. These glaciers feed rivers that account for about 75 percent of the stored-water supply in the country of at least 220 million. Thus, mountains, in a way one perspective, stand as some of the last natural ‘islands’ in a sea of increasingly anthropogenic-influenced lowlands, providing a number of significant ecological functions extending beyond mountain regions.

But recent reports assessing the health of the Hindu Kush and Himalayan (HKH) glaciers amid rising global temperatures from the leading environment organisation, UN Environment and International Centre for Integrated Mountain Development (ICIMOD), finds that these mountain societies are on the verge of collapse in the face of a multitude of climate challenges. With a rise in temperature and precipitation, summer snow lines (altitude above which or latitude beyond which snow does not melt in summer) on Pakistan’s mountains have crept up an average of 3,395 feet since 1981. As a result, these mountain regions have become a ticking time bomb with the creation of over 3,000 glacial lakes which are highly likely to burst open in the form of Glacial Lake Outburst Flooding (GLOF), accelerating erosion and landslides, which are among the deadliest natural disasters. Over the past decade, the region saw an unprecedented surge in the formation of glacial lakes - the number has grown from 2,420 to 3,044. Equally alarming, the annual South Asia monsoon has grown and spread over a couple of months as temperatures soar earlier. The once late summer monsoon, which previously only affected southern and eastern Pakistan, has gripped the mountainous regions now and is exacerbating the situation further.

In the light of the UN synthesis report titled Mountain Adaptation Outlook Series these risks expose the already vulnerable and often marginalised mountain communities and destabilising some of their wealth-generating sectors, including agriculture, tourism and biodiversity; the question arises: what needs to done?

According to Saeed Abbas, the IUCN Pakistan, CPEC project manager, adaptivity is the key to avoiding losses in the face of more extreme natural calamities. Saeed, who has researched environmental changes whilst previously working with international conservation organisations in the region, is of the opinion that mitigating climate change effects will take both global and regional efforts and may take a lot of time.

"The intensity of floods is increasing with every passing year. This has resulted in climate-induced migrations. Climate-induced migration in the foreseeable future is expected to grow manifold as over the years we have noticed that once people leave their areas they are reluctant to go back for the fear of more floods," he says.

Referring to The Hindu Kush Himalaya Assessment report, a study authored by 210 scientists from 22 countries over the last five years, Saeed points out that the mountain chain will lose two-thirds of its ice fields by 2100 if global greenhouse gas emissions are not drastically curbed. Even with collective international effort to restrict global warming to 1.5 degrees Celsius, the glaciers will have shrunk by 36 percent by the end of this century.

With such grim forewarning, experts suggest that there is an urgent need for Early Warning Systems (EWS) coupled with indigenous knowledge across the region. But the provincial disaster management authorities are both ill-equipped and cash-strapped. Farid Ahmad, the Gilgit-Baltistan Disaster Management Authority director general, agrees that EWS are the only hope for mountain communities to survive through this apocalypse.

"This gradual and irreversible thaw in the region’s glaciers has started to manifest in socioeconomic disruption and categorical human displacement. This is a grave concern for us. With a deficiency of knowledge products on climate change impacts, vulnerability assessment and cost effective adaptation and resilience planning, we are actively working with international NGOs and locals to draw a contingency plan in case of future calamities," he says.

The increasing awareness of climate change impacts on mountains, mountain ecosystems, and mountain communities have started drawing attention to mountains during international debates such as the United Nations Conference on Environment and Development in Rio de Janeiro in 1992, the Sendai Framework for Disaster Risk Reduction 2015, the Paris Agreement 2015 of the United Nations Framework Convention on Climate Change, and the Sustainable Development Goals (SDGs) and Targets 2030. In Pakistan, there should be a greater push for ‘mountain perspectives’ to form an integral part in all discussions about sustainable development in the context of climate crisis. This means not just highlighting vulnerabilities and fragilities inherent to mountain locations, but also emphasising the resilience and strength that mountain people and communities bring when dealing with these challenges.