The war of narratives

From mainstream media to entertainment, portrayal of women as ‘damsels in distress’ is a phenomenon all too common 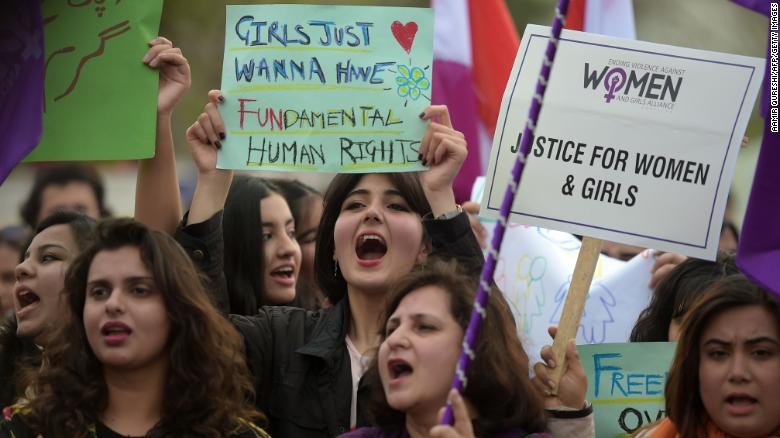 Known as much for her witty monologues as for the towels she wraps around her face leaving only her eyes exposed, Naik Parveen Baji is determined to expose internalised patriarchy and society’s bias against women through her satirical Facebook videos. In this battle she brings her deadliest weapons: a high-pitched nasal voice in an altogether familiar accent, and a sharp sense of humour.

Enter Mariam Shafqat, the real woman behind the fictional character.

"It started on a personal level, inspired by one-on-one experiences. But then I realised it was an ongoing thing, and I could keep talking about it. That’s how this character started developing in my head," says Shafqat. A former journalist, who is now pursuing her doctorate in Germany, Shafqat started a Facebook page called Naik Parveen Syndrome back in 2013. The page identifies its content as feminist satire. Initially, she used the page to post anonymous one-line sarcastic status updates that delved into the deep-rooted hypocrisy of the society, as she experienced it. "Since my late teens I have identified myself as a staunch feminist, so from a young age I started noticing what people would say, and also why they would say it," she recalls. From attitudes towards girls’ education, job opportunities for women, marriage and having children, to life goals, Shafqat observed social attitudes and narratives on all these topics. It was all around her.

While the page remained active for over a year, it remained dormant for a few years until the Aurat March in 2018, which made waves across the country through its reach, scale and alternative narratives. It also triggered a ferocious media and social media debate. "There was an immense backlash. There were many shallow arguments being made that needed to be countered," she says. Shafqat made her first Naik Parveen Baji video in March 2019, right after the Aurat March. The video, which was less than a minute long, received 20,000 views and around 200 comments that varied from appreciation and support to, at times, outright abuse. But the Facebook page kept on rolling. To date it has 26 videos, around 25,000 likes and 26,000 followers.

Following the recent case of alleged domestic violence involving actor Mohsin Abbas, Shafqat made more videos in July that mocked the way society debated on the issue following allegations made by the actor’s wife. The videos mocked the there’s-always-the-other-side-of-the-story narratives that emerged in the wake of the actor’s press conference. Her monologues included sarcastic comments such as "taali tou hamesha dono haath say bajti hai," and "kuchh tou kiya hee hoga aap [abuse victim] nay". One of these videos received 475,000 views and 3,500 audiences engaged through comments.

But Shafqat remains sceptical. Pages like hers, she says, have a niche audience. The fear remains that, at times, the message gets lost in the humour. "I think some people may get influenced by it but there are a lot of people who just find the accent funny, and don’t really get the message or the fact that this is feminist content," she says. But she remains cautiously hopeful that some of her audiences would be able to identify or even call out violent, abusive and misogynistic behaviours.

While Shafqat explores satire as a medium to generate awareness on issues, another Facebook page Feminustani engages its audiences in feminist dialogue through videos that take a different approach altogether. Hosted by journalist Sabahat Zakariya, the videos take an in-depth look at issues faced by "urban Pakistani women" by exploring social attitudes. Ranging from explainer videos on economic independence and narratives that focus on victim-shaming to even conversational videos on Valentine’s Day, the page offers a serious conversation on social issues that challenges stereotypical attitudes.

Created in January last year, the Facebook page has around 15,000 followers and almost the same number of likes.  Feminustani has created seven videos, including one which takes a detailed look at Pakistani television dramas and their portrayal of Pakistani women. The 20-minute video dissects popular Urdu television dramas and makes sharp critique on stereotyping reinforced through them. Zakariya illustrates through excerpts from television dramas that these frequently depict women as helpless victims, crying over their fate. In her opening remarks in the video, Zakariya comments: "Bad art can never do justice to the realities and complications within societies." The video ends on a sterner note. "Our dramas are spreading bad art in society, are dumbing us down and reducing our intellectual level with each passing day."

Zakariya isn’t alone in her observation.

Commentaries critiquing stereotypical portrayal of women, and in turn shaping social attitudes, through media platforms such as television dramas, mainstream movies, and even popular literature, have managed to gain ground. These have also inspired a few to do something about it.

Anain Shaikh is a writer and illustrator at a social enterprise, Azcorp Entertainment. She has been producing comic books for children and young adults that aim to address social issues by shattering stereotypes. Through their stories they have managed to highlight issues relating to gender equality, civic sense and social justice. With four comic titles under their belt and over 500 comic books, Shaikh says their team believes in empowering individuals from a young age. "We aspire to show the victim not as someone who is helpless but as someone who has the ability to tackle problems," she says.

Mein Hero is one of their comic series which engages school children in developing storylines by incorporating social issues and challenges faced by them in their local settings, and creating heroes - not super heroes - to solve them. The project which started in 2016 has so far produced 33 books by engaging school children in Lyari and Malir. "The process offered them a chance to connect to the outside world. They felt their voices were being heard," says Shaikh.

One of the stories in the comic series deals with the subject of domestic abuse, and the children involved in developing the storyline were encouraged to write based on their experiences and perceptions. Their stories were not altered. The protagonist in the story goes on to fight for her rights - a local hero was thus created. These stories go on to be shared through stage and radio plays under their initiative, inviting school children of the same localities. Shaikh believes that women in mainstream media have always been portrayed as ‘pitiful victims’ incapable of taking charge. "You want the victim to feel empowered. You want them to think of what can be done, and this is what we try to inculcate through our stories," she says. The series has addressed topics including girls’ education, civic responsibility, internet safety, water conservation, resilience, tolerance, and equal rights in the household.

But the battle is far from over. From mainstream news media to entertainment industry, portrayal of women as the usual ‘damsel in distress’ is a phenomenon all too common, says White Ribbon CEO, Omer Aftab. "There has been so much reinforcement of stereotypes altering societal attitudes for so long that it almost always puts the blame on women, even when they are the victims," he says. A campaigner for women’s rights, Aftab says fighting patriarchy is all the more challenging since it exists in varying forms in different strata of the society.

For rights campaigners, sensitisation of mainstream media has remained a challenge for far too long, says Aftab. Citing instances of news coverage of rape and abuse forcing victims to flee their neighbourhoods and even cities, Aftab says, at times, news coverage has amounted to nothing short of a ‘second assault’ on abuse survivors. And it doesn’t end there. With crime re-enactment shows taking much of primetime spots on news channels, the focus has been on sensationalising crime. "Somewhere in that process, the plot is lost. There is indirect condemnation of the victim instead of the perpetrator," he says.

In 2013, a media code of ethics was developed by White Ribbon following focused group discussions with journalists across the country, which was endorsed by over 150 journalists at its launch the same year. With vows made to re-evaluate news reporting, rights campaigners felt mainstream journalists made an effort to act responsibly. Aftab notes that in the past five years there has been a noticeable change in how media reports such stories, though the same remains questionable in some quarters. Another problem is the tone set in some talk shows, especially by hosts. "What needs to be understood is the influence these individuals carry. We also need to look at the mindset of the people in media itself, and how that shapes public opinion and attitude," he says.

Mazaaq Raat, a television talk show aired on a private news channel, which featured Mohsin Abbas, recently started issuing disclaimers following the domestic abuse allegations against the actor-singer. The disclaimer stated that the channel has distanced itself from the actor in the wake of the recent allegations since some episodes were recorded prior to the case, they have content that features Abbas. The channel has said that until the actor clears his name, he will not be part of future episodes of the show. The disclaimer was run recently before and during the airing of the show.

Aftab says some major cases of violence were brought to light after these were taken up on social media. Allegations against Abbas were also initially taken up on social media following her wife’s posts on Facebook and Twitter. "Voices that are being raised through social media are difficult to silence," says Aftab. However, for campaigners the difficulty is in gauging how media weighs out issues of abuse and social injustice against other mainstream stories. For rights activists, convincing mainstream media to continue to focus on these issues remains difficult. "Unless there is an incident, no one is willing to take up the issue till there is a pressure from social media. Wait for another ten days and see how many in the news media continue to talk about abuse or violence against women."

The war of narratives