Army to leave tribal areas by 2022 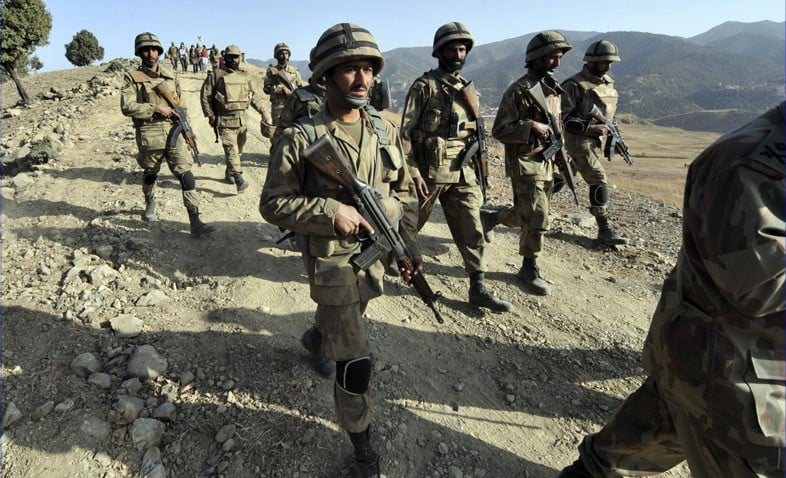 The government is working on a plan to withdraw the Pakistan Army troops from the erstwhile Federally Administered Tribal Areas (Fata) by 2022, but the timeline for raising 14 new wings of the paramilitary Frontier Corps (FC) to take charge of the security duties is behind schedule.

The 14 FC wings were to be raised by 2018, but the period has reportedly been extended to 2019. Seven FC wings have been raised through fresh recruitment from the tribes in Khyber Pakhtunkhwa. Further enlistment would be done as resources become available. A security official told The News on Sunday Rs 1.2 billion was needed to raise one FC wing.

The Pakistan Army soldiers would be pulled out gradually and the withdrawal completed by 2022 if the FC acquires the required strength and training to be able to replace the regular troops. Obviously, the schedule for a complete withdrawal would be decided keeping in view the security situation in the merged tribal districts.

It won’t be wrong to say that the Army’s 11th Corps (Peshawar) has been spearheading the nation’s fight against terrorism. Its troops are deployed in Pakistan’s most militancy-hit and conflict-ridden province, Khyber Pakhtunkhwa, including the seven merged tribal districts and six former Frontier Regions. Of the 34 districts in the province, the army troops are deployed in seven districts. They are also deployed along the 1,229-kilometres long border that Khyber Pakhtunkhwa shares with Afghanistan.

The war against terrorism in Pakistan has gone through many phases. Currently no major military operations are taking place against the militants. Security officials describe as ‘transitory’ the nature of threats faced currently, primarily from Afghanistan-based Pakistani militants being used by hostile intelligence agencies.

The Tehrik-i-Taliban Pakistan (TTP) remains the major threat while the ISIS, or Daesh, is often described as an emerging threat. The recent increase in acts of terrorism in some of the conflict-affected areas, in particular North Waziristan, is said to be the result of renewed hostility being shown by the TTP under Mufti Noor Wali Mehsud and by a group led by Hafiz Gul Bahadur. The presence of about 2.7 million Afghan refugees in Pakistan is also seen as posing multiple security challenges.

There was a time from 2007 to 2013 when the militants were on the offensive and the government control had shrunk to 23 percent of the territory in Fata. The militants were running a parallel administration in some places and had set up courts and prisons. On both sides of the Durand Line, the international border between Afghanistan and Pakistan, there was a Taliban surge -- Afghan Taliban and Pakistani Taliban. In fact, until 2005, the US forces in Afghanistan had largely remained oblivious of the regrouping and resurgence of the Afghan Taliban and Washington had shifted its focus to Iraq.

The Tehrik-i-Taliban Pakistan (TTP) remains the major threat while the ISIS, or Daesh, is often described as an emerging threat. The recent increase in acts of terrorism in some of the conflict-affected areas, in particular North Waziristan, is said to be the result of renewed hostility being shown by the TTP under Mufti Noor Wali Mehsud and by a group led by Hafiz Gul Bahadur.

As many as 15 major military operations starting with Al-Mizan were launched in Fata from 2007 onwards to clear 47,000 square kilometres area and restore the writ of the state. Other achievements in the anti-terrorism war included defeating the terrorist ideology with political and public support and rehabilitating the 3.5 million internally displaced people. The latest evidence of the sustained stability in ex-Fata has been the holding of the first-ever elections in the areas for the Khyber Pakhtunkhwa Assembly on July 20.

Ongoing security measures include the fencing of the Pak-Afghan border and construction of 443 forts and border terminals at Torkham (where about 14,000 people cross the border daily nowadays), Ghulam Khan, Kharlachi and Angoor Adda to regulate the movement of people and goods. According to security officials, 830 kilometres of the 1,229 kilometres border between Khyber Pakhtunkhwa and Afghanistan is to be fenced as the remaining is mostly snow-bound. Until now, 563 kilometres of the border has been fenced. The original plan was to complete the fencing work by the end of 2019. However, the project which also includes building 443 forts near the border and installation of an intrusion-detection system would continue into the summer of 2020. It is expected that the whole system would be fully operational by December 2020.

Still it would be wrong to assume that the fencing, fort-building and intrusion-detection system would completely bring to an end the cross-border infiltration and other unwanted movement. It is estimated that 90 percent of the intrusion would be overcome once the project is completed. Due to opposition by the Afghan government, the fencing would be resisted in some areas -- even sabotaged. Incidents of sniper and cross-border fire and stealing of stores required for fencing take place frequently and would continue to happen in future.

The issue of security checkpoints and presence of anti-personnel mines, unexploded ordnance and improvised explosive devices (IEDs) continue to pose problems. These issues, together with that of missing persons, have been highlighted among others by the Pashtun Tahaffuz Movement (PTM). The government is of the belief that the PTM exploited these issues to gain popular support. It has been taking steps to address these issues. There is little motivation now to engage with the PTM as both civil and military authorities claim they engaged with its leadership without much success. The military has plans to further reduce roadside checkpoints and convert another 65 into joint posts to be manned by the army and police. The 84 army demining teams are going on with the task. A recent report inidicated that 44 percent of the territory has been cleared of mines.

The reconstruction and development projects being executed by the army remain the cornerstone of the policy to address public concerns and stabilize the merged tribal districts. Rs 58 billion has been spent by the army in the last six years to execute projects in education, healthcare and other socio-economic areas. This amount is not part of the projects being implemented by the civil authorities. However, much would depend on the timely availability and proper use of the promised special funds [Rs 100 billion per year] for the merged tribal districts for the next 10 years. These funds could prove the game-changer for the erstwhile Fata, which has remained the most under-developed part of Pakistan due to past neglect.

Army to leave tribal areas by 2022