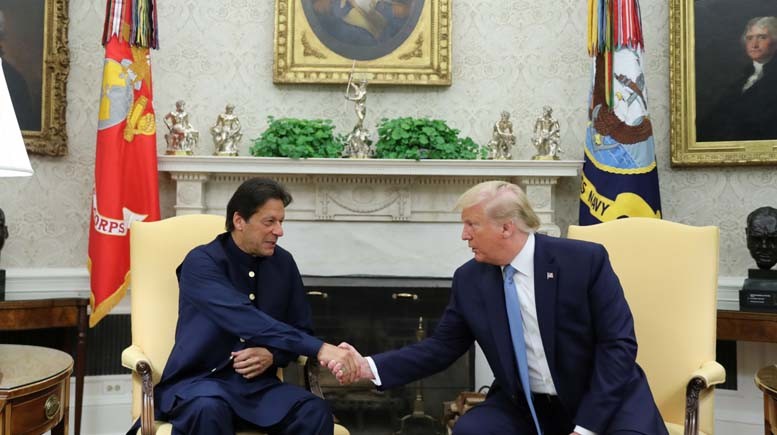 It is now almost two weeks since our prime minister’s visit to the US. Now we are perhaps in a better position to look at the visit and its outcomes. One of the achievements was the US announcement on July 27th to resume technical assistance for F-16 maintenance. The US Security Cooperation Agency responded positively to a request from Pakistan in this matter. (US authorities also announced military sales to India.) Let’s briefly assess the visit.

One way of evaluating such visits is through a lens of three indicators: planning, process, and product. Planning here does not mean the logistics, rather it looks at how the content and the matters of discussion were developed and prepared before the visit started. Process again is not related to how smoothly the visit proceeded, rather it concerns the points that were raised and how they were tackled. Finally, the product here means what was the output of the entire brouhaha.

To assess the planning phase, first we have to look at the foreign policy itself -- the policy which should ideally emanate from at least three sources: the cabinet, the parliament, and the standing committee on foreign affairs. These consist of elected representatives of the people who are informed by the Foreign Office and the security establishment. The last two, i.e., Foreign Office and security establishment can give briefings to the first three, i.e., cabinet, parliament, and the standing committees, but cannot develop or dictate a foreign policy.

In an undemocratic setup, the first three -- or most them -- are bypassed and the decisions are taken by single leaders or their coteries. They made their decisions either personally or with the help of their commanders. For the recent visit of the prime minister, nobody knows or remembers the role cabinet played or how and when the parliament or the standing committee were consulted or taken into confidence. Of course, it is not a requirement before every foreign visit of the premier; but the visit to the US is not an insignificant development.

When a new government comes to power it is expected to bring new thinking and a change in approach; especially if a government comes to power with a big promise to overhaul almost everything and introduce a ‘New Pakistan’. So far as the planning was concerned, it was all business as usual; with the parliament and the public in the dark about any new approach or strategy apart from the old slogans and one-upmanship. No new foreign policy was drafted or even outlined to be shared with the public so that we could understand what the New Pakistan was doing in terms of foreign affairs.

Now the process. During his visit, the prime minister met with high officials of the IMF and the World Bank. Apparently, the meetings went well, but again we don’t know what was new in the discussions and how the agreements will affect the national economy. Had the Pakistani team done some homework in this regard and if yes, what was it exactly? We know that the IMF provides monitory support and the WB gives credit for development projects and that’s what most of the previous governments had been seeking, so one would like to know what was new this time.

The next big thing was the prime minister’s address to the Pakistani diaspora gathered in a big hall where thousands of PTI supporters from US and Canada cheered their favourite leader. If you measure the success of an event by the number of people attending, it was definitely a huge success. But if you gauge it with the yardstick of content, there was much to be desired. The prime minister reiterated his old promises and delivered a lecture on Islamic history and patriotism, two of his pet topics. He sounded like standing on a container and addressing a crowd protesting against the previous governments.

Another interesting remark by Mr Trump was his assertion that Pakistan never lied. This was in contrast to the allegations of a double game hurled at Pakistan by some US quarters in the past. The accusation was that on one side Pakistan projected itself to be part of the American ‘war on terror’, and on the other harboured terrorists.

One would have expected much better from a prime minister who rode to power with the same slogans. In his address to the crowd, he talked about removing air conditioners from the prison cells and reinforced his commitment to accountability of previous rulers. This rhetoric is entirely familiar to PTI activists and leaders. The most important point missing was any mention of how much money overseas Pakistanis including the PTI supporters have sent to Pakistan. The PTI leaders had been promising a huge increase in remittances once the PTI government came to power, so much so that there would be no need for the government to beg or borrow.

With the prime minister was addressing his supporters, there were other diaspora Pakistanis, including those from Pakistan Progressive Alliance and Pakistan Forum for the Restoration of Democracy, who protested against media curbs in Pakistan and for the protection of civil liberties in the country. There were also activists from other political parties such as the MQM; and there were representatives of minorities in Pakistan who were calling for fair treatment of marginalised groups in the country. It was heartening to see that not everybody got carried away in the wave of populism.

The climax of the visit was the prime minister’s meeting with President Trump at the White House. The most prominent feature that the international media highlighted was President Trump’s disclosure that the prime minister of India had requested him to mediate with Pakistan on the Kashmir issue. Trump clearly said that Modi wanted him to mediate and he awaited Imran Khan’s nod in this matter. This created rumpus not only in the Indian media but also in Indian parliament. For Pakistan this was a welcome development as India has long insisted on Kashmir being a bilateral issue.

Another interesting remark by Mr Trump was his assertion that Pakistan never lied. This was in contrast to the allegations of a double game hurled at Pakistan by some US quarters in the past. The accusation was that on one side Pakistan projected itself to be part of the American ‘war on terror’, and on the other harboured terrorists like Osama bin Laden and Mullah Akhtar Mansoor who were both killed in Pakistan. But now, Trump has testified to the veracity of Pakistan.

President Trump also encouraged Pakistan to play a more active role to facilitate the US pullout and help stabilise Afghanistan. His praise of Pakistanis as hardworking people must have touched many a heart in the diaspora who will now work even harder to make America and themselves more prosperous. The most disappointing was Trump’s unwillingness to announce an immediate restoration of US assistance to Pakistan. Perhaps, the US has put certain conditions on the table so that the American interests are protected before assistance is resumed.

The US president also extended the carrot of expanding trade with Pakistan "ten to twenty times", and also talked about the possibility of restoring $1.3 billion in aid cut that was imposed last year.

Lastly, the product. By the time the visit ended, the good news on Kashmir had fizzled out. Regarding aid, the prime minister had said he hated the idea, meaning he might refuse such an offer. Before flying back, he also reminded us that "a country can only rise through self-respect, not begging". Well, thank you. Finally, perhaps the bombshell product of the visit was his final assertion or confession at the USIP that the "US operation to take out Osama bin Laden was humiliating and it was the ISI which gave US the information about the location of Osama".