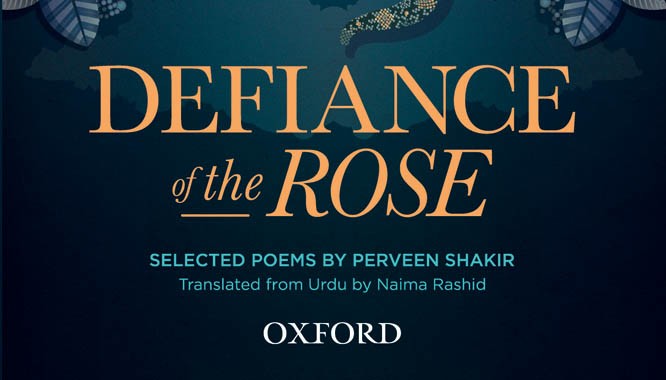 Perveen Shakir’s poetry bestowed upon her a legendary status and a legion of fans. She was renowned for her thematic experiments and the boldness with which she expiated on the experience of being a woman in Pakistan.

Defiance of the Rose, (Oxford University Press 2019), a collection of her poems translated by French scholar and poet Naima Rashid offers an exposition of Shakir’s unerring poetics. A poem titled Karachi, begins with the lines: Karachi is that dispensable whore/that, from across the planet’s rim/ any man with wallet fat or slim/spends the night with at his whim. This is a heartrending example of anthromporisation, drawing us straight into the desperation and squalor of a once cosmopolitan city.

A highlight of this selection is the way Shakir plays with the form. Her evocation of a poet’s life in Verse spans only two lines and is precise: Companion to the solitude of the house/ the grass creeping upwards on the walls.  There is an acknowledgment of the pleasures of solitude, yet there is also an equally powerful engagement with the notion of the beloved or the ‘other’.

Her depiction of a love mitigated by societal constraints in Chain Reaction is particularly poignant: ‘But the gulf that yawns/between you and me/ of eras and ages/ and the vested interest of our respective clans/ is neither in my power/ nor in yours to bridge’. In her frank expression of her marginality as a woman and the impossible communal constraints between her and the poem’s addressee, one senses the complexity of the poet’s experiential reality.

In later poems there is an avowal of the risks of writing with candor in Pakistan. In For a Poetess, Shakir writes: When the whole city was pointing fingers at you/ who placed their hand upon your head?/when it rained hard/who offered the shelter of their embrace?/whenever the gusts of wind grew stronger/ who kept the earthen lamps burning in your house?/ who wore your verses like kohl in their eyes? These lines take into account the potentially terrible exclusion of the writer from the mainstream, as well as the particular dilemma of a female writer who might choose to write with deliberate peculiarity.

Rashid’s translation is remarkably fluent; there is a confidence in its rendering that allows even the most pronounced yearning in Shakir’s verse to be expressed in an elegant timbre, and without recourse to the argot of lament. Rashid’s adeptness with the material at hand is exemplified in a poem articulating the stifling routine of marriage titled A Voice from Down Under, which begins with the lines: Adorned with books and flowers-the perfect house/a man to care and provide for me-the perfect spouse and ends with:  deep from within the bowels of the house/ a harrowing voice incessantly howls/ Release me ! Release me!’ Here, one sees how lyric, rhyme and the prevalence of a refrain, meld hypnotically and are seamlessly transmuted to English, losing none of lustre of their original medium.

Naima Rashid, sheds light on her translation and the feminist tropes of Shakir’s work in conversation with Afshan Shafi, for The News on Sunday.

The News on Sunday: What was your first introduction to the work of Perveen Shakir?

Naima Rashid: My first introduction to Shakir’s work was in my teens, when I was a student at college. This was by osmosis, absorbing what others around me knew of her. The rediscovery came some years ago, when I consciously undertook a responsible and critical reading of her work.

TNS: How did the idea of translating her come about?  Did you have any apprehensions when you first started?

NR: Primarily, the idea of translating her work came about not as a literary impetus, but rather as an urge to change mindsets around her verse, though this only happened once I had discovered first-hand the relevance of her work to the present times. Also, I had always been astonished by the limited range of her works known to the mainstream.

My biggest apprehensions were about revealing Shakir’s verse in its full, bold majesty. It was the toughest part of the battle, defending the selection of the poems, but I was redeemed when some of the most respected Urdu writers and critics got behind it.

TNS: What would you say are the overarching themes of Shakir’s oeuvre?

NR: Apart from the poems that talk about the full experiential spectrum of womanhood, she shows a deft mastery of the socio-political portrait in verse. Her portraits draw up a cast of characters that present a cross-section of the times she lived in. In her philosophical poems, she reflects upon life in a style that keeps the poems accessible and easy to understand. These poems are imbued with almost story-like twists. Then there are shorter poems, fleeting and impressionistic, which move by swiftly - like scenes flashing by a train window - but linger in your mind for days afterwards.

TNS: Were there any challenges in translating her work into English? If so, please elaborate.

NR: From a literary aspect, the biggest challenge was keeping the buoyancy of her verse intact, and capturing the rhythm and movement in the translation, and making bold choices in the service of that aim.

TNS: Which poem in the collection resonates with you the most, on a personal level, and why?

NR: The opening piece, When the Wolves Come. The poem is in meter, and reads slowly. There is a silence at the centre of the poem, a weighty, pregnant silence that stabs you in the gut. It is disturbing, ominous, and full of foreboding.

As a piece, I find it powerful because of the moment it describes, expressing the essence of fear that a woman feels and overcomes almost on a daily basis. She is at once vulnerable and defenseless, and also resolute and invincible. There is also that textural contrast between the velveteen surface of a rose and the gruffness of a wolf’s hide, which emerge on a background of red; a colour field that holds suggestions of both spilled blood tainting the fangs of the beast and strewn rose petals. It gives me chills every time I read it.

I chose it as an opening piece because in meaning and form, it distills the essence of her work in a single poem, and contains an imaged encounter that punctuates her larger oeuvre as leitmotif.

TNS: What would you say to the local millennial who might encounter Shakir’s work for the first time in English?

NR: I would say, read it with an open mind, and be prepared for some stylistic surprises. Several short poems have a very contemporary vibe. They read, in many instances, like Rupi Kaur’s poetry, or what we have come to call Instagram poetry - short, clipped, with an extempore and unrehearsed feel. I would also say, read the Urdu version every time.

TNS: How would you describe the feminism of Shakir’s poetics? In what ways do you think she broke the mold, in her professional life and as a poet?

NR: In the realm of feminism, her stance was unique because she made the journey from Khushboo (Fragrance) to Inkaar (Denial), both in verse and stages of life. More than being a feminist or adhering to any slogan, her life and work symbolise the essence of what it means to be a strong woman. The way she lived was the perfect example of her feminism. For her, being a strong woman meant being completely whole in all roles, embracing the struggle that comes from living within the constraints spelled out by society, yet always yearning for more.