The case of populist litigation

Some matters become controversial because of the petitioners involved, especially when they are not the aggrieved parties 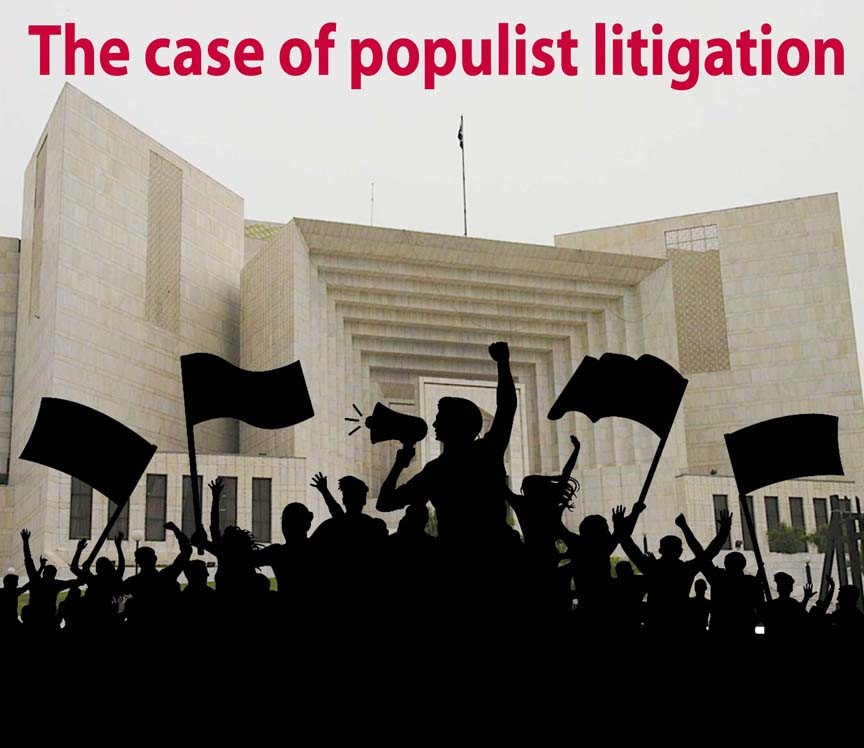 The petitioners in all these cases were aggrieved parties and directly affected, except may be in Khan’s case. This case turned out to be one of the most difficult to dispose of. He never wanted to become a petitioner, and initially, had just written a letter to the Supreme Court inquiring about the presence of a ‘political cell’ in the Inter-Services Intelligence (ISI). It took the State 10 years to answer, after his letter was turned into a petition. In 2013, the SC finally declared the 1990 general elections rigged, and confirmed that money was distributed to influence the elections. Now, for the past five years, the SC is seeking to hold to account those who had given the money and those who had accepted it. No wonder it has been called the ‘mother of all cases’.

Some matters become controversial because of the petitioners involved, especially when they are not the aggrieved parties. The lawyers’ community describes these individuals as ‘habitual petitioners’.

Sometimes, people file such petitions to seek media attention. In some cases they are ‘used’. The 1998 ‘coup’ within the superior judiciary is an instance of this. As for the first time in Pakistan’s history, we witnessed practically two Supreme Courts hearing the same petitions, within hours of each other. I have kept some of the press clippings from those times. It is indeed a curious record with a collection of some very interesting petitions and petitioners.

One of the ‘habitual petitioners’ who emerged during the crisis was Maulvi Iqbal Haider. He once confided in some journalists how he was ‘used’ for filing petitions almost every day. Those were the days when Sharif government wanted to oust the chief justice of Pakistan, Justice Sajjad Ali Shah.

During this crisis, even some oral petitions were entertained. If a court issued an injunction in a particular case, the other court vacated the order within an hour. For all practical purposes, the SC had become a laughing stock. The crisis ended only after Justice Sajjad Ali Shah resigned.

The 2017 crisis too promoted the trend of ‘habitual petitioners’. Prior to this, there was only one person known for filing regular petitions. If I am not mistaken, he had filed hundreds of these petitions. That person was Abdul Quddus Bihari. He was one of the most well-known people among lawyers, judges and journalists. His petitions were often linked to property cases.

Filing petitions had become a habit with him. He did this without any political or financial gains. But he certainly got publicity in the press.

Article 184(3) of the Constitution, which deals with issues of Fundamental Rights, has never been used as freely or recklessly as it was in the post-2007 era, following the lawyers’ movement backed by the then opposition, that made an important pillar of the State strangely independent.

Some senior jurists now believe that, at times, it has been ‘over used’, if not misused, especially during the tenure of two former chief justices of Pakistan - Justice Iftikhar Mohammad Chaudhry and Justice Saqib Nisar.

Earlier, the question of petitioner’s being the aggrieved party had often been raised to decide the question of maintainability. But a five-member bench of the Supreme Court settled this issue in its landmark decision in Benazir Bhutto’s petition regarding electoral laws, according to former judge of the Sindh High Court, Justice Rasheed Rizvi.

"Court is not a closed shop," he said, quoting one of the judge’s remarks in the verdict, adding that this led to every other person approaching the highest court with petitions, under Article 184(3) even if they were not the aggrieved party.

Rizvi also remembers Quddus Bihari, acknowledging that the man had no political designs. "He became his own client and it was not easy for the courts to dismiss his petitions," he recalls.

In the post-independence judiciary, the tendency of accepting ‘petitions’ or taking suo motu notice in the name of breach of fundamental rights witnessed a record high.

In the post-independence judiciary, the tendency of accepting ‘petitions’ or taking suo motu notice in the name of breach of fundamental rights witnessed a record high. As a result, the Supreme Court became more like a political forum rather than a strictly judicial one. Successive prime ministers and ministers were routinely summoned. This did not help strengthen the democratic system. At times Article 184(3) was seen in the context of Article 58-2(b) - inducted in the Constitution by General Zia ul Haq - which resulted in the sacking of three prime ministers, Mohammad Khan Junejo, Benazir Bhutto - in 1990 and 1996, and Nawaz Sharif in 1993.

It is also interesting how such petitions, at times, are immediately fixed for hearing. The same could be said about suo-motu notices during the past decade.

The incumbent Chief Justice of Pakistan, Justice Asif Saeed Khosa, has so far maintained an excellent record, not only in speeding up disposal of pending cases to clear the backlog, but also in avoiding suo motu action. He has also set-up ‘model courts‘ in different cities, and initiated the system of e-Courts, to lessen adjournments.

However, under him, the judiciary would be tested in two major cases - the reference against Justices Qazi Faez Isa and KK Agha, and Judge Arshad Malik’s video case.

Some people would say Judge Arshad Malik’s case was fit for suo motu notice under Article 184(4), as it involved the question of fundamental rights of a three-time prime minister, Nawaz Sharif, and the judge’s own reputation.

Now it appears that the SC would consider four to five options but is waiting for the Federal Investigation Agency’s inquiry report. After an initial hearing, the case has now been adjourned for three weeks, so that its hearing might coincide with the main appeal of former premier, Nawaz Sharif, and his daughter, Maryam Nawaz, in the Islamabad High Court.

Since Pakistan’s judicial history is not something we can be proud of, particularly the way it has sent elected governments and premiers home and provided legitimacy to un-elected and dictatorial rule, people generally see cases of political nature in the same perspective.

But the fact is that political leaders do drag superior courts into controversies, which should be settled in the parliament. In the recent past, it was former prime minister Nawaz Sharif, who became a petitioner in the ‘Memogate‘ case. He again went to the Supreme Court in the Panama Leaks case, ignoring the advice of the then opposition leader to answer in the parliament. Had he taken the advice he might have been asked to quit as prime minister, but avoided judicial review.

What happened in Zulfikar Ali Bhutto’s case is an abiding shame for the judiciary, from the day it was taken up till the execution of Pakistan’s elected prime minister. The judiciary has yet to correct the ‘historic wrong’, even after former CJP Justice Nasim Hasan Shah, a judge on the bench, confessed that he was under pressure to give a verdict against Bhutto.

Though the context is completely different but in Arshad Malik’s case too, the court, in all fairness, has to see the judge’s moral and professional conduct as well as the pressure on him to give a verdict against Nawaz Sharif.

The SC court has now raised a very valid point as to why the ‘aggrieved party‘ has not moved the court to seek relief.

Pakistan’s political and judicial history would have been a lot different had the PPP leadership accepted Nawaz Sharif as prime minister after his government was unanimously restored by the Supreme Court in 1990 and had declared President Ghulam Ishaq Khan’s action under Article 58-2(b) illegal.

Supreme Court under Justice Iftikhar Mohammad Chaudhry had corrected some of the historic wrongs of judicial history like giving legitimacy to dictatorial rule or martial law. But for reasons best known to him, the petition seeking ‘justice’ in Bhutto’s case was never taken up after the initial hearing. It remains pending.

The judgment in the petition filed by PML-N leader, Syed Zafar Ali Shah, against the October 1999 coup is also considered one of the darkest chapters in the country’s judicial history, as it not only gave legitimacy to the un-constitutional rule but also allowed amendments to the Constitution.

Pakistan needs to strengthen all four pillars of the State. When every pillar plays its role without interfering in the other’s domain, the system can flourish and perhaps, would bring an end to ‘habitual petitioners’.

Article 184(3) should be used with care to protect the fundamental rights. Political parties and leaders also need to understand the consequences of taking political and constitutional matters to the court. There can’t be a bigger forum for political matters than the parliament itself.

The case of populist litigation