Pakistan and its diaspora

The Pakistani diaspora is a growing and important segment of our larger milieu. The time has come to critically engage with it, both at the policy level and in academic debate 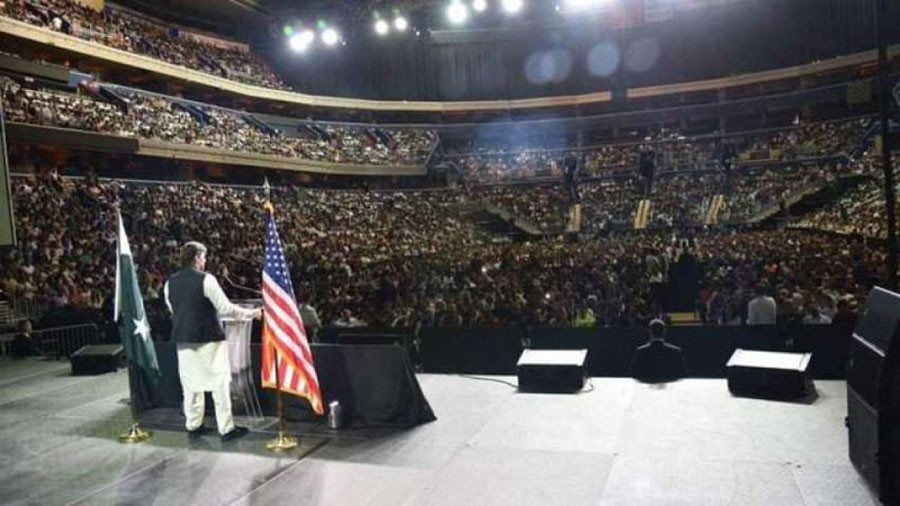 On July 21, 2019, Prime Minister Imran Khan addressed a historic gathering of Pakistani-Americans in Washington DC during his official visit to the United States. Claimed to be the largest ever gathering of Pakistani-Americans, the event was remarkable for its sense of cheer, hope and passion. Almost everyone who attended it came back energised and beaming -- it was as if they had attended a concert by some rock star, rather than listened to a speech by a prime minister. The sense of exhilaration, pride and hope was patent on the faces of these expats, with many returning home still wrapped in the green flag they were vigorously waving at the arena. To some observers, the gathering at the arena was at once charming and surreal.

It is well known that Imran Khan and his ‘vision’ are very popular among the Pakistani diaspora. Be it a result of his good looks, the 1992 World Cup victory, or his promise of a new Pakistan, the Pakistani diaspora throng to him and his message more than any other Pakistani leader. Even the erudite and popular Benazir Bhutto never pulled off such a big gathering in the United States. Perhaps only Zulfikar Ali Bhutto was capable of such a feat, but then he lived at a time when the Pakistani-American community was tiny.

What is becoming increasingly clear in the last decade or so is the fact that the Pakistani diaspora is an important factor in the future of Pakistan. It is also becoming clear that we hardly understand its dynamics, and are unable to fully grasp its development, issues and concerns.

Academic literature has only recently started to assessing the Pakistani diaspora. The focus is largely on security-related issues in the community. Very little attention has been given to an anthropological assessment of the diaspora community. With the numbers of Pakistanis abroad increasing, there is a need for a better understanding of its dynamics, especially since it has begun to make its presence felt in Pakistan.

While an academic assessment of the diaspora is not possible in these pages, let me make some exploratory points, which I hope will stir academic and policy debate on the issue.

First, from the gathering of the Pakistani-American community in Washington and other such events, it is clear that amongst the priorities of the diaspora community is a restoration of the ‘pride’ of Pakistan. While the notion itself is not easy to explain and its connotations change from person to person, it is clear that the diasporic community will throng to anyone who gives them a sense that Pakistan is not a beleaguered country, always talking about terrorism and how it is falling apart, but a proud and resilient nation which demands to be treated with respect and honour. Such ‘chest thumping’ connects with the community, and is increasingly becoming a sine qua non, especially since the rise of Modi in India who does it particularly well.

What is becoming increasingly clear in the last decade or so is the fact that the Pakistani diaspora is an important factor in the future of Pakistan. It is also becoming clear that we hardly understand its dynamics, and are unable to fully grasp its development, issues and concerns.

Furthermore, this ‘pride’ projection seems to be acceptable to the community as long as it happens, regardless of the fact that it might just be rhetoric. In fact, what is interesting, perhaps even scary, is that there is no expectation of it being anything beyond rhetoric. This emphasis on theatrics, rather than substance, is worrying since it forces any visiting leader, be it Imran Khan or any other prime minister, to simply play to the gallery. Rather than bringing them into the national discourse, these rock star antics then become the hallmark of interaction between a country’s leader and its expat population. This equation then creates a very false reality, which is hard to shrug off after a while.

Secondly, it seems that the Pakistani diaspora is clear that things are dramatically wrong in Pakistan and that a wholesale clearing up is needed. The cheers Imran Khan received from the crowd in Washington as he described how he was dealing with the opposition, exhibited the strong support of the Pakistani American community for harsh measures against ‘corrupt’ politicians, since in their eyes they were to blame for all the ills of the country. It also highlighted the deep sense of hurt within the community and its resulting urge for them to support all measures to bring about the ‘day of reckoning’ to those politicians they blame for the woes of the country.

While there is nothing wrong in believing that there are problems with Pakistan -- there certainly are -- this simplistic understanding of Pakistan and its problems speaks of a very superficial grasp of the internal dynamics of Pakistan. The question, of course, is that is this lack of understanding deliberate or simply a lack of information which can be rectified with more knowledge. This question is all the more critical in countries like the United States where the expat community is largely well-educated, and well-placed, and therefore supposedly well-informed. In other words, do they no longer know much about Pakistan or do they simply not want to know? This is the central question and must be investigated.

Thirdly, we need to go beyond treating the disapora Pakistani community as mainly a source of ‘remittances’. While the money sent to Pakistan is important for our foreign exchange reserves and does contribute to the economy, only a full integration of the expat community in Pakistan’s economy will enable them to play their full role. We have already seen the example of the non-resident Indians who thronged back to India in the 1990s and then the 2000s spurring an economic growth.

This ‘coming back’ so to speak, did not happen in a vacuum. A lot had to change within India to provide these expats space, ease of business, security and opportunity, so that they could both participate in the development of their country without leaving their adopted country.

The euphoria around Imran Khan’s election was expected to lead to such a ‘reverse brain drain,’ but a year down the line there has not even been a trickle, let alone the promised torrent. The government, as well as the community leaders, need to carefully think about how to integrate the expat community within the framework of a global Pakistan, which moves from the rhetoric to the real. The recent witch hunts over dual nationals and suspicions over their loyalty towards Pakistan certainly do not bode well if the aim is to encourage people to return to Pakistan and invest in it.

Finally, the foreign missions of Pakistan certainly need to move beyond the ‘community relations’ approach towards the expat community. This approach mainly means gathering them for Pakistan Day and Independence Day, and holding Eid functions. It does not work. While social functions are certainly a good thing, deeper engagement with the expat community, especially at the level of educational initiatives, multicultural activities, social engagement (meaning family, marriage and divorce issues), and larger issues of integration and development is essential. Otherwise, not only will the expat community imbibe a very bizarre and skewed image of Pakistan, it will also develop in a very insular and destructive manner, as already seen in some communities.

The Pakistani diaspora is a growing and important segment of our milieu. The time has come to critically engage with it, both at the policy level and in academic debate, so that we might not only understand its development but also aid in the progress of Pakistan.

Pakistan and its diaspora