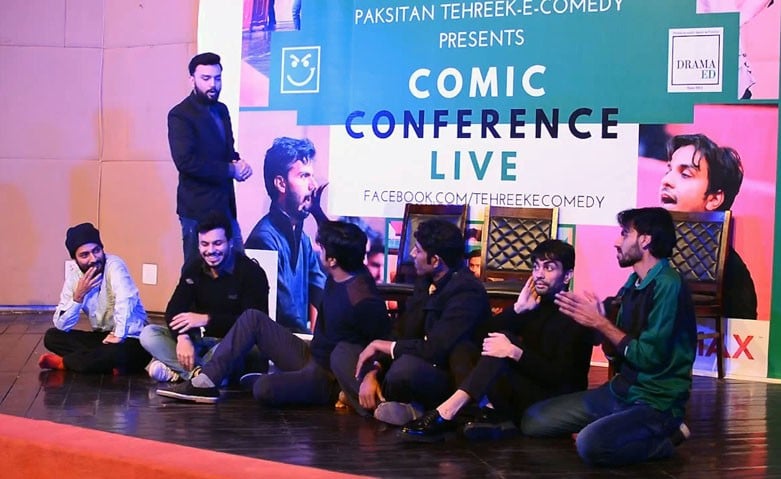 In Elizabethan times, the jester was the only person in the king’s court who had the audacity or, maybe in a more profound sense, the ability to speak the truth. In the 17th century, the Shakespearean fool used irony, sarcasm, and humour to moderate Lear’s behaviour; in the 19th century, Dostoyevsky’s idiot used a quiet intuition to read and reciprocate people’s behaviour; in the 21st century, Pakistan Tehreek e Comedy (PTC), a band of millennial comics, trot around the country, trying to pluck out the adversities sown deep in our communal heart, and shout them before us in loud, humourous colours.

In this sense, the season premiere of PTC’s new show, Pakistan Comedy League, on July 20, at Ali Institute, felt like a medieval congregation where jesters, despite being stripped of their rainbow hats and tricycles, were able to pull out laughs using sketches that poked fun at subjects like love, conformity, obligation, and tradition. In a hypersensitive society, there is so much truth to say and so many barriers that sprout at every attempt.

Shah Fahad, co-founder of PTC, tells TNS, "The purpose of our comedy is to deliver a message of truth, whether it is through social satire, caricature, irony, and the like."

He says that PTC is a project of DramaEd (or Drama Education), a student collective from various universities in Lahore, which was set up in 2011 to perform improv comedy, stand-up, parody, and character sketches.

With Fahad as the initiator and Ali Ahmad as the creative director, the group started performing at Alhamra Arts Council. Their show, titled Comic Conference, is a form of live comedy inspired by an improvisational television show in the United States, Whose Line Is It Anyway?, where the audience interaction forms the core of the performance.

Talking about his choice of format, Fahad says, "The gesturing, dialogues, eye contact with your audience just wash away any distractions that might otherwise steer them away."

The PTC members have been honing their craft for over 10 years now. "The harmony within the group is so consolidated that everyone knows their place even in an uncomfortable situation," says Amna Khan, a female member of DramaEd.

The recent show opened with the disclaimer: "We do not and cannot perform alone!" It sort of alerted the audience into performance mode. Urti Khabar was the first sketch, and the only scripted one. Everyday mundane problems like toothache and traffic were brought up as breaking news which evoked many laughs.

From socks to sunsets, the comics intuitively twist and turn the most unconventional subjects into elaborate poems, as the audience applauds enraptured by their quick wit. However, to pull a feat like this requires a certain niche of audience that has patience and appreciation.

The next hour was a continuum of improv sketches that followed a unique ‘flip and freeze’ format, where the characters on stage would assume stereotypical roles or popular culture personas in atypical scenarios, and play them out for a few minutes, before jumping into new characters in new scenes.

No one was spared: every profession was mocked, every (needlessly extravagant) Bollywood song made grandiose, every reaction amplified and coloured with gestures and voices covering the entire spectrum of human sentiment.

Through their loud sketches, the PTC subtly targeted prejudice and middle-class angst. As one sat there, smiling, hooting, and applauding at the slurry defense of an honest man whose only crime was alcoholism or the wrenching plea of a maiden whose crime was to have loved without adult approval, one could not help mull over how these issues plague so many lives and are stigmatised yet here they are discussed freely in the guise of humour. Even in a country like Pakistan, comedy retains its power to speak freely, and pushes the edge of what is acceptable.

According to Khan, "Comedians are honest, and authentic. I chose this line of work because it is pleasing to be around a group of people who do not take themselves seriously."

However, not everything elicits a laugh. The fact that there are only three women in a predominately male group is reflective of the discrepancy in gender representation that is nested in our society. Khan explains the lack of diversity in the group by saying, "It is not that the group chooses to be that way, but the fact that only three women were given the luxury or the choice to pick comedy as a career."

Not much of the content is feminist -- possibly in views of the mostly male audience. Therefore, the moderators of the comedy group have to manoeuvre their content around issues like class chasms, poverty, and financial inequalities, rounding up many of the controversial topics.

A perfect example of how the audience acts as a buffer in PTC acts is their mushaira (poetic symposium) where the audience pitches topics that are then moulded into poetry by the performers. From socks to sunsets, the comics intuitively twist and turn the most unconventional subjects into elaborate poems, as the audience applauds enraptured by their quick wit. However, to pull a feat like this requires a certain niche of audience that has patience and appreciation. Unfortunately, not every tide of audience is smooth to sail.

Occasionally, young male groups carrying a condescending air return indecent remarks when urged to interact. "Comedy is truly taken for granted in Pakistan," adds Khan. "Sometimes the audience is infantile. Maybe it has not shed its association with stage drama, or the category of Punjabi theatre classed as vulgar which is why the audience does not accept it as a form of art."

The PTC ended their performance with a message of love. "Seeing people happy is so beautiful," said one of the performers.