The great story of the greatest adventure

Apollo11, as it happened and is remembered in literature 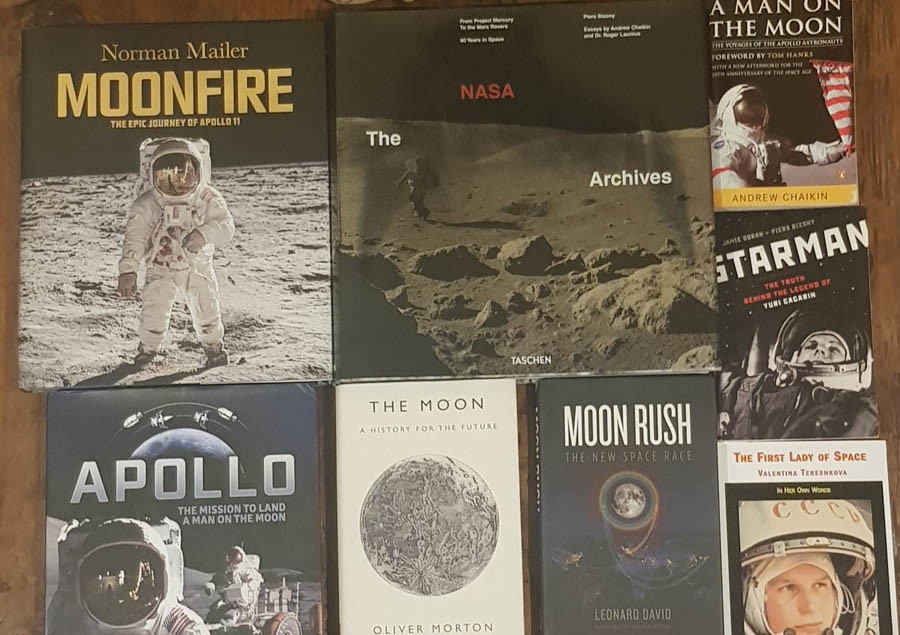 In Pakistan, we struggle to find the newly risen Moon nearly every month - since we keep track of the lunar calendar for religious purposes. The frustration is the acutest at Eid when the Ruet-i-Hilal Committee never fails to fail in its search for the infant crescent without controversy.

And yet, the Moon has been hard to miss in recent years, looming large as it has in the global conscience. Last week marked the golden jubilee of simply the greatest scientific achievement of the human species - landing on the Moon, considering the will and the wherewithal required to achieve it. July 21 this year marked the 50th anniversary of the lunar touchdown of the 11th of the 17 Apollo missions on the quest to visit an extra-terrestrial celestial body that put Neil Armstrong on our beauteous Moon: "…One small step for Man, one giant leap for Mankind," in his historic words as he set foot on the Earth’s solitary natural satellite.

How we ended up on the Moon 50 years ago is the single greatest story of human prowess to master Nature and which materialised arguably the greatest mission statement ever devised, by US President John F Kennedy who stood before Congress on May 25, 1961 and proposed: "The US should commit itself to the goal, before this decade is out, of landing a man on the Moon and returning him safely to Earth." A whopping $40 billion later ($360 billion in today’s value), aided by a staggering staff of 400,000 engineers, the goal was achieved in less than eight years. But not before a series of scientific achievements steered by a nascent NASA that had been born in 1958, only three years before the Moon dream. The feverish Moon dream itself was the result of two sensational feats - the first satellite into space, Sputnik, sent to orbit in 1957, by the Soviet Union, which officially triggered the global space race. The first man in space Cosmonaut Yuri Gagarin, made his first orbit in April 1961, just one month before Kennedy’s daring Moon announcement. And then soon thereafter, the first woman in space, Valentina Tereshkova - also Soviet.

The space race was fierce and shrouded in secrecy. Led by visionaries Sergei Korolev managing the Soviet space programme and Werner Von Braun who ran a breathtaking American programme, the KGB and the CIA were majorly occupied with spying on each other’s programmes to steal even the thinnest margins of competitive edge to become the first in a range of first feats. It was a thrilling contest that was won by Soviet leader Nikita Khrushchev who pipped both American Kennedy and Nixon to the post on sending the first man and woman in space, and several other technical firsts. Until Apollo 11 won the race to the Moon and Khrushchev’s gruff successor Leonid Brezhnev lost interest in space as a battle-ground. As the space race fizzled out, competition gave way to collaboration. Both countries approved and moved ahead with plans for a joint mission to Mars and collaborated on facilitating their respective space stations - Skylab of America and Soyuz of Soviet Union but it lost steam after American public’s appetite for more money slowed down the programme. The Mars mission was, sadly, eventually abandoned.

Aided by the golden jubilee of the Moon landing, these and a thousand other delightful aspects of the fascinating space race are the themes of a spurt in new books on the Moon catering to a new Moon mania sweeping the globe.

The Soviet Union had originally planned to put a man on the Moon first but lost the race to America’s Apollo programme. But not before Moscow’s Vostok program put Gagarin in orbit and then Cosmonaut Valentina Tereshkova as the first woman in space. Of the 17 Apollo missions, nine aimed for and reached lunar orbit and carried a total of 24 astronauts in orbit (out of the 32 planned). Of these only 12 actually landed and walked on the Moon. At least three reached Moon twice but no single astronaut ever walked the Moon twice. The last human who walked on the Moon, on December 14, 1972, was Astronaut Commander Eugene Cernan. On June 17, 1973, he happened to officially visit Pakistan, landing in Karachi, and meeting Pakistan’s first elected Prime Minister Zulfikar Ali Bhutto, presenting him with samples of lunar rock he had brought back from the Moon with him. Sadly, he passed away in 2017, missing the golden jubilee of the event that eventually made him the last man on the Moon.

Aided by the golden jubilee of the Moon landing, these and a thousand other delightful aspects of the fascinating space race are the themes of a spurt in new books on the Moon catering to a new Moon mania sweeping the globe. I’ve always been interested in science fiction and space programmes since the days of my youth in Sri Lanka. It was aided by a love of Arthur C Clarke, one of the greatest science fiction visionaries ever, who first proposed the idea of communications satellites in orbit and who was the author of 2001: A Space Odyssey, one of the greatest sci-fi stories ever told. He lived in Colombo near my college. Once when I ran into him, in my unashamed fanboy moment, telling him I’d read several of his books, he advised me, "A book worth reading is a book worth buying." I’ve always held on to the advice, building up a relatively big personal library in the bargain, with a sizable chunk of science fiction and science fact books. This now includes, over the past several months, many new books on the Moon purchased from several cities across the globe. Some of the best ones include the following.

Moonfire - this is a 50th anniversary updated edition from the late Norman Mailer who reported the Apollo 11 mission for the iconic Life magazine. No one quiet captured the men, the mood, and the machinery of the Moon mission #11 like Mailer. Illustrating this volume are hundreds of photographs and maps from the NASA vaults, magazine archives, and private collections. These images document the development of the agency and the mission, life inside the command module and on the Moon’s surface, and the world’s jubilant reaction to the landing. It is one of the best coffee table books on the subject you can buy by one of the greatest writers ever.

Moon Rush: The New Space Race - this one is by veteran space journalist Leonard David. In its rich pages, he explores the Moon in the future perspective rather than the past - including detailed plans for a Moon colony. Illustrating his text with maps, graphics, and photographs, he offers inside information about how the US and competitors China and India, as well allies Russia, Europe, Israel Japan and Australia, and key private corporations like Moon Express and Jeff Bezos’s Blue Origin, plan to reach, inhabit, and even harvest the Moon in the coming decades. Read this to keep abreast of the 21st-century space race back to the Moon. Also contains a foreword by Buzz Aldrin, the second human on the Moon, who is still alive.

The Moon: A History for the Future - this is a lovely book by Oliver Morton, a veteran author on science for The Economist and Nature magazines. His is a lyrical prose and offers an intimate portrait of the Moon that explores the history and future of humanity’s hypnotic relationship with it. He explores how the Moon has shaped our perceptions of the Earth - from the controversies of early astronomers such as van Eyck and Galileo, to the Cold War space race, to the potential use of the Moon as a stepping-stone for further space exploration. Cool with a melancholic tone, this book with the understated elegance of its prose and the profoundly wide-angle view of the Moon, places humanity’s lunar forays into new, thought-provoking contexts littered with material that strikes, amazes or haunts.

Apollo: The Mission to Land a Man on the Moon - this book by Al Simino follows humanity’s dream of walking among the stars and charts, how space travel and space programs have grown since then. This is the story of the Apollo Missions, with all of its ups and downs--in 1967, a cabin fire killed the entire crew of Apollo 1 after an oxygen tank exploded, while the Apollo 13 crew limped back to Earth using the lunar module as a ‘lifeboat.’ This is a book about human stories behind the Moon mission story.

A Man on the Moon: The Voyages of the Apollo Astronauts - this Andrew Chaikin book is breathtaking in the intimacy it accords the Moon missions. It is an authoritative masterpiece on the Apollo space program and NASA’s journey to the Moon. This acclaimed portrait of heroism and ingenuity is a favourite of several astronauts themselves who have called it the definitive account of their missions. It has more inside stories, more details, more recollections, and more feelings of all the men who travelled to the Moon than any other account of the Apollo program, according to some in NASA.

Starman, a biography of first man in space Yuri Gagarin by Jamie Doran and Piers Bizony and The First Lady of Space, a brief autobiography of Valentina Tereshkova, are indispensable books to learn about both the personal lives - both were children of peasants who beat incredible odds, including near starvation and slave labour under German occupation of Soviet Russia, to first become star pilots and then humanity’s pioneers in space - and the incredible space programs that transformed human dreams into magnificent victories against a forbidding universe apparently hostile to biology. Without their human stories the Moon missions can’t be put into proper perspective. They are among the best biographies I’ve ever read.

The NASA Archives: 60 Years in Space - this massive 10kg book by space archivists Piers Bizony, Roger Launius and Andrew Chaikin cost me $170 to buy from my favourite bookshop, located in Copenhagen. It is a large-form visual guide to NASA’s history illustrated through hundreds of archival photographs, rare concept drawings and more, bringing viewers from the agency’s beginnings to the present day. It is simply one of the greatest ever books assembled on the Apollo missions. One of my favourite photos in the book is a view of the special enclosure at the Kennedy Space Centre, near where the Saturn V rocket carrying the Apollo 11 mission blasted off into history and future at the same time. The enclosure has the flags of a few countries fluttering into the bright blue sky. The brightest one of them has a lovely crescent Moon on it - it is Pakistan’s flag witnessing humanity’s greatest feat as it flutters energetically in the wind.

The great story of the greatest adventure