­A day to Rome 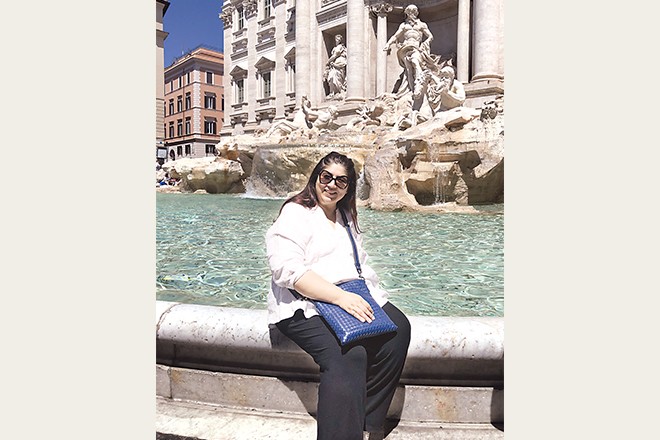 Italy has to be on every tourist’s bucket list of ‘places to visit before you die’. It’s probably also on every art and literature enthusiast’s list because home to Michelangelo, Leonardo Da Vinci and Bernini’s best works, Italy is also home to 2000 years of history and subsequent literature. It’s where the warp and weave of haute couture originates but I’m not even going to go there on this trip. I’m going to stick to my brief and yet eye-opening trip to Rome and how it fed the soul.

Applying from Pakistan, on a Pakistani passport, will require 21 working days, a visa fee and you’ll have to make sure you have travel insurance. Remember that if you have been living outside Pakistan for more than 6 months, you will have to apply from your place of residence; that’s the global policy and can upset your plans if your child, studying in the US, applies on his summer break in Karachi.

I planned ahead of time and was able to get great rates on Etihad from Karachi to London and then on to Rome on Alitalia. Etihad, I have to say, gave us great leg space, which makes all the difference when you’re flying coach. I also managed to book a hotel in the heart of the city; Hotel De Petris was small and basic (no 24-hour room service) but clean and most importantly, walking distance from the Trevis Fountain, Pantheon, Piazza Navona and more historical sights. It’s important to find a hotel in Central Rome where every important site will be accessible; check the map when booking.

How much can you do in a day?

If the Vatican is your priority, then I suggest you book a tour and make a beeline as early as possible. It’s a full-day trip (if you want to do it justice) for which you should also check the forecast for better weather or ideally, an overcast.

I saved the Vatican for another day and day one in Rome for me - which came with a challenge to see as much as possible - started at the Trevis Fountain, which is one of the thousands of sculpted fountains in the city and also the most famous in the world. It’s customary to throw a coin in the fountain and apparently €3000 are collected every day, for charity. It’s a crime to take coins out of the fountain, so don’t try to pick up a souvenir or two! I threw a coin and wished for a return to Rome, as tradition goes, but also for the eternal existence of art and literature, which makes the world so much richer. The Trevis Fountain, featuring Neptune on a chariot and embraced by cool clear water, has to be one of the most magnificent works of art ever created. It was mesmerizing, despite the heat and the ambush of Chinese tourists.

Stop two was the Pantheon, a brief walk away. Initially constructed as a temple for pagan rituals, the original Pantheon burnt down twice, before the version we see now was built in 120 A.D. but its exact date of birth is unknown. What stands, however, is the best preserved historical structure in the world. It was both amazing and calming to experience the history that the Pantheon cradles under its gigantic dome. And as it now serves as a Church, one is encouraged not to talk inside. To sit in one of the pews and drift away in thought was soulful.

Moving towards the Piazza Navona, considered one of the most beautiful squares in Rome, we did make an essential gelato stop. Check gelato off the ‘must-eat’ things in Rome.

Piazza Navona, however, was an eye opener to Bernini’s work. The Fountain of Four Rivers, at the centre, was another splendid structure with a fascinating history. Amongst the many stories, I felt the statue holding his hand up against the sight of the Church was in fact shielding his eyes from the blistering sun. By midday it had gotten too hot and we had to get out of the sun but not without appreciating the craft of a master. The proportions on every sculpture, the realism that enabled one to feel a man’s muscles rippling under the cool touch of stone, the expressions and the postures were simply awe inspiring.

We walked around and ended up at the Jewish Ghetto, a settlement nearby that boasted one of the most popular restaurants, the Nonna Betta, best known for its fried artichokes. I would highly recommend it for anyone visiting Rome.

By 3pm, I felt the onslaught of a heat stroke and so opted to take a cab back to the hotel where I could rest and refresh before heading out again. We aimed for sunset at the Spanish Steps, a quick trip to the Colosseum and then dinner at another quaint restaurant called the Trastevere, best known for serving the airiest focaccia bread in the world. Somewhere in the midst of all the monuments we also tried authentic Italian pizza from Roscioli. Don’t leave Rome without trying this out.

It’s actually impossible to fit all of Rome into one story, even if you do get ambitious enough to cram several landmarks into one day. The Vatican will take a full day; the countless museums won’t be manageable even if given a whole day. There is just so much art and architecture, from the ancient ruins to the modern structures that you could stay here for a week and still not be able to see it all. And you’ll need several trips to savour the essence of the city that buzzes with tourist life 24/7 and yet has an eerie supernatural air to it after dark. This is, as they say, when the ghosts of thousands of years of bloody feuds and executions come to haunt it.

­A day to Rome