The voluntary national review depicts a glass half full, an important indicator for a mid-course correction to achieve the SDGs 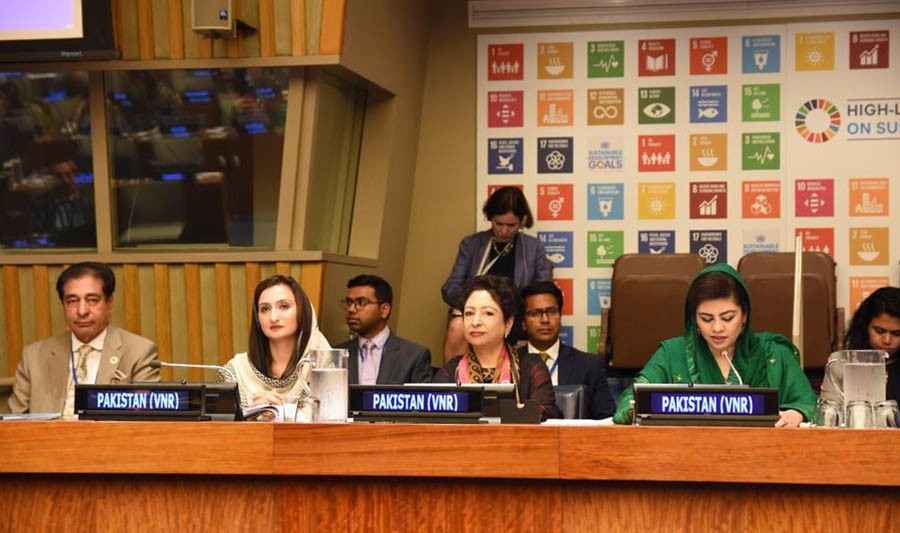 The Millennium Development Goals (MDGs) -- the eight development targets that 191 UN member states agreed upon in the year 2000 to try to achieve by the year 2015 -- have not been fully realised but they still provide a blueprint for a way forward for sustainable development. In this connection, the adoption of Sustainable Development Goals (SDGs) in 2015 (also known as Agenda 2030) was seen as a big step in setting the priorities right. Four years down the road, Pakistan has presented its voluntary national review (VNR) on SDGs to the UN. The document is a review of the state’s experience and challenges in formulating policies and institutional frameworks to accelerate progress towards attainment of SDGs.

Before looking into the contents of VNR, let us recall the lessons learnt from Pakistan’s experience with the MDGs. The MDGs were perceived as donor-led agenda without much domestic political ownership. There was little integration and institutional collaboration for MDGs within or across various governance tiers. The MDGs were also static and lacking a social or human face. Finally, there was little capacity and understanding of the goals at the local level where they were to be delivered.

Several challenges, including the financial crisis in 2008 had taken its toll on the economy. This was evident from the mounting food and fuel prices coupled with challenges like the war against terrorism, suicide attacks, the crises due to internally displaced people (IDPs), and the poor state of the business sector.

Historical floods in 2010 and late added to the problems. These factors hampered government’s efforts to fulfill the commitments for efforts for achieving the MDGs. One might argue that MDGs agenda had already failed in Pakistan four years before its 2015 deadline. The failure was attributable to a lack of integrated and localised approach to connect the three dimensions of development -- social, economic, and environmental -- to achieve sustainable development.

Looking at the VNR one may assess the country’s level of preparedness for attaining the SDGs. It seems that the government is focusing on interconnectivity in devising the policy frameworks.

In February 2016, Pakistan was the first country to adopt the global goals as national development goals introduced in the National Assembly.

Political commitment and ownership for the 2030 Agenda was therefore there. In fact, Pakistan had started integrating the SDGs into its national policy framework before the United Nations September 2015 Summit. After a comprehensive consultation with stakeholders in 2014, Vision 2025 -- development pathway to 2025 -- came into being, which was linked to achieving the SDGs.

In 2018, Pakistan saw its third consecutive democratic transition of political power. Sustained democratic order has allowed development institutions to grow stronger and play their role in creating an enabling environment for implementation of SDGs. Effective implementation and localisation of the 2030 Agenda hinges on the local government system.

In 2018, Pakistan saw its third consecutive democratic transition of political power. Democratic order has allowed institutions to grow stronger and play their role in creating an environment for implementation of SDGs.

The Local Government Summit in 2017 organised by the Planning Commission of Pakistan resulted in a national SDGs framework, which was approved in 2018. The framework devised three categories of global goals. In the first category are goals that require immediate attention to pave the way for the rest of the goals. Periodic monitoring of various areas of the SDG framework is critical.

Poverty alleviation is Pakistan’s main focus. In 2015-16, 24.3 percent of population, which comes to about 50 million people, lived below the poverty line (1.9 dollars per day).

Despite persistent challenges, some progress has been made through targeted interventions. A few social safety programmes, including the Benazir Income Support Programme (BISP), private philanthropy, and Ehsaas, have improved the beneficiaries’ access to microfinance in rural areas, too. Ehsaas, for instance, targets inequality by providing expanded social protection and support for human capital development. The initiative also aims to address the problem of stunting in impoverished communities.

Economic slowdown under the IMF loan programme may hinder efforts for poverty reduction in the short term. However, an improved law and order situation, greater political stability, high remittances inflows, and attempts to broaden the direct tax base are expected to have positive effects on poverty alleviation in the medium to long run.

The SDG Goal 2 is zero hunger. High levels of malnutrition lead to a low workforce productivity which costs Pakistan $7.6 billion or 3 percent of its gross domestic product (GDP) every year. It also seriously impacts upon the most important asset of Pakistan -- human resource.

In 2012-13, 44.8 percent of children under five years of age were stunted (low height for age). According to the Planning Commission the figure was 37.6 percent in 2017-18. However, this figure has been reported at 40.2 percent under the National Nutrition Survey (NNS) 2018. Even if going by NNS numbers, there is a reduction in the prevalence of stunting.

SDG - Goal 3 is to reduce under-five mortality rate (per 1000 live births) from 89 (2012-13) to 40 by 2030. Neonatal mortality rate has declined from 55 (2012-13) to 25. Lady Health Workers programme has been fairly effective due to its accessibility and reach. The initiatives targeting those living below the poverty line include a micro health insurance programme, and the Sehat Sahulat Programme, which so far has provided healthcare to 3 million people in 44 districts.

Being an energy deficient country, Pakistan relies on fossil fuels. This account for about 43 percent of imports. SDG - Goal 7 is to increase access to electricity from 93.45 percent in 2014-15 to 96 percent. Pakistan has overcome the problem of severe power outage. However, the cost of electricity and the so-called circular debt remain a challenge for the government.

Despite Pakistan’s low-carbon footprint, the country is the seventh most-at-risk from the impact of climate change. Therefore, both climate adaptation and mitigation are essential. The 10 Billion Trees Tsunami, Clean and Green Pakistan, and Recharge Pakistan are some of the initiatives on climate change.

The 12th Five-year Plan (2018-23) is aligned with the SDGs objectives (equity, inclusivity and sustainability) but there exist implementation challenges. These include lack of coordination, which leads to duplication of efforts, and hence limit stakeholder participation.  Similarly, lack of knowledge on policy issues and limited awareness at the grassroots level is another problem. Add to these a lack of financial resources for Pakistan’s huge population.

To overcome the development challenges for a densely populated and culturally diverse country, Pakistan has to learn from the global success models.

One of the main aspects of the country’s implementation strategy for the SDGs is strengthening the existing working alliances and making new ones. Close collaboration with a broader number of stakeholders and international development partners should continue to be an important feature of the efforts. In short, the VNR depicts a glass half full. The report is an important indicator for a mid-course correction to keep our priorities right.