Of the lesser royalty

The tombs of Dai Anga, Sharfun Nisa and Mai Dai call for attention and research 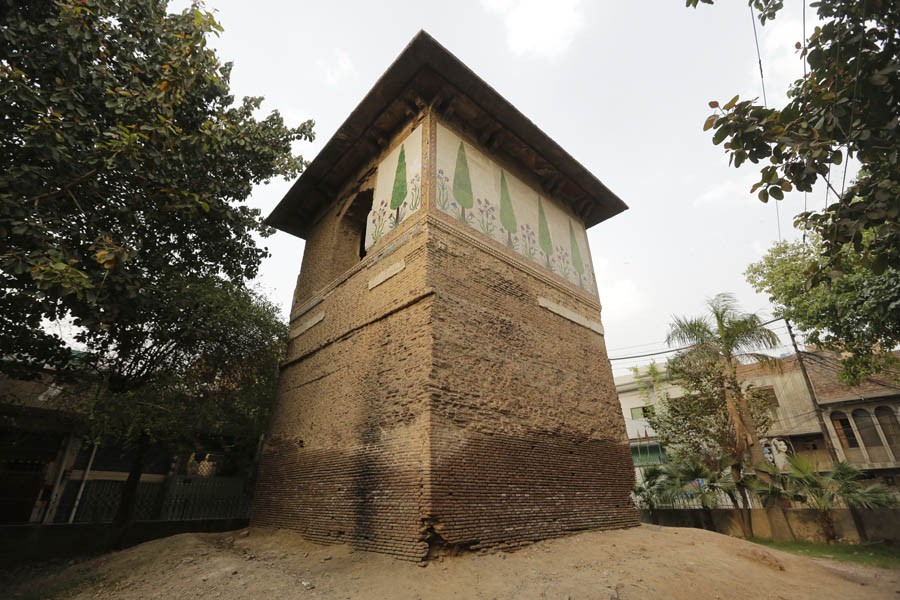 Begumpura is a dinghy neighbourhood of Lahore, located to the north along the Grand Trunk (GT) Road, close to the Walled City and the sisterly neighbourhoods of Mughalpura and Baghbanpura.

In the words of Tania Qureshi, a chronicler of Lahore, "[It] was called Begumpura as it was named after Nawab Khan Bahadar Zakriya’s mother, who was known as Begum Jan Sahiba. It was in her lifetime that Begumpura was built."

Kanhaiya Laal, a noted historian, and the writer of Tareekh-e-Lahore reminiscences about Begumpura: "A locality built for the rich and mighty of Lahore, in close proximity to the Shah [Jahan]’s fort."

Nawab Khan Bahadur Zakariya, the governor of Lahore, was also the brother of Sharfun Nisa Begum whose last abode, the Cypress Tomb -- colloquially known as Saroo Wala Maqbara -- is a tall, pillar-like structure, 25 feet above the ground.

According to Arif Rehman Chughtai (of the famed Chughtai Museum and Chughtai line of artists and architects), "Sharfun Nisa had built a residential tower for herself for seclusion. She used to mount a removable ladder to the top of the tower, and would read the Holy Quran for one hour every day inside it alone. She also had a bejewelled sword with her in a box and she would put both things together there. When she died, according to her will, she was buried in the same tower. And according to her wishes, the Quran and the sword were placed on her sarcophagus, and the building sealed from all sides. There they remained till the Sikhs took over Lahore."

The invasion of Lahore happened half a century after Sharfun Nisa died, and it is a popular opinion that the tomb was raided, the bejewelled sword and other precious things taken away. However, the sturdy walls bearing the tiles with cypress trees painted on them stayed intact.

Why she chose a life of seclusion, and a burial of even greater seclusion, inside a tall, column-like building is a mystery. Laal has tried to answer this, by presenting the political situation of those times: the Sikhs had taken over the city of Lahore, during the reign of Mughal Emperor Muhammad Shah, in the middle years of 1700s, and a lot of bloodshed was happening in the city which involved Governor Zakariya, Nadir Shah, and the Sikhs.

Another explanation is that Sharfun Nisa was the daughter of Nawab Abdul Samad Khan, the viceroy of Punjab. She was unmarried and spent her life studying the holy book. She chose to build a reading room above ground level so that no passer-by could peek in and cast a glance at her. The same reason is given for her burial in the air -- no man should look at her grave.

The reasons sound like she had a serious need for privacy. The numerous cypress trees around her tomb gave it the name -- Saroo Wala Maqbara, and it became so common that people gradually forgot Sharfun Nisa’s name and her story.

Dai Anga was the wife of Murad Khan, a magistrate of Bikaner during the rule of Emperor Jehangir. Shortly before her death, she had left for Makkah to perform pilgrimage and Shah Jahan ordered a mosque, named Masjid Dai Anga, to be built before her return, as a gift to her. The pilgrimage took a heavy toll on her health, and she died very soon after.

A resident of the Walled City of Lahore, Dr Allama Iqbal was once so mesmerised by the beauty of the tall structure built for Sharfun Nisa that he wrote a poem for her in Persian. The translation of a few couplets from the poem goes:

Who dwells in here, O Rumi?

Whose abode outshines the sun?

Her dome touches where angels live

This abode hath lifted Lahore with it

But it is a puzzle, with no answer.

The poem goes on to reveal that Sharfun Nisa, on her death bed, had willed her grave to be dug in the same reading room she had spent most of her life in, and so it was done.

A very disturbed Sharfun Nisa had engrossed herself with piety and worship, as is evident from the engraving on the tomb, a verse in Persian that reads, "Allah Baqi, Wa Alkul Faani" (translated as "Allah is Permanent, all the rest is temporary"). There is indeed a need to look more into the story of Sharfun Nisa, as well as a restoration of her tomb which is in shambles, to say the least.

At a short distance from the Saroo Wala Maqbara, is the tomb of Dai Anga, the wet nurse of Emperor Shah Jahan. Dai Anga must not be confused with Emperor Akbar’s Dai Maham Anga. Anga, or Anaga, was the title given to women who nursed royal children, as per the custom.

It was a special feature amongst the rich people during the Mughal era that the mothers hardly nursed their infants; a nurse, having a balanced temperament and good qualities, was employed for the purpose, and she was styled Dai Dudh Pilai, or Anaga.

It was a matter of honour for women to be picked as foster mothers for infants of rich families, or royalty, for that matter, since especially after Nur Jehan’s reign, the nurses were made part of the harem and were given royal treatment.

Balkrishan Shivram, in a research paper, titled Dayas or Anagas of Imperial Mughals, notes: "A dozen Dayas were hired for Akbar. Jiji was the chief Dai, whereas Maham was responsible for bringing up Akbar and his mental training. Bibi Fatima was Humayun’s nurse and Fakhrun Nisa Anaga was his caretaker. For Jehangir, Akbar appointed several women from the progeny of Sheikh Salim Chishti, Akbar’s sufi spiritual Godman, and the same women continued for his other children. Shah Jahan’s wet nurse persistently mentioned in chronicles as Zebun Nisa or Dai Angah, was a woman of chaste nature."

Dai Anga was the wife of Murad Khan, a magistrate of Bikaner during the rule of Emperor Jehangir, Shah Jahan’s father. Shortly before her death, she had left for Makkah to perform pilgrimage and Shah Jahan had ordered a mosque, named Masjid Dai Anga, to be built before her return, as a gift to her. The pilgrimage took a heavy toll on her health and she died very soon after.

In Colonial Modernities: Building, Dwelling and Architecture in British India, written and edited by Peter Scriver and others, Masjid Dai Anga is said to be one of the most beautiful structures, having particularly rich and intricately painted decorations. It was, according to the book, also used as a place of dwelling for British officers during the Raj. It still stands tall in Lahore and although it has been deprived of its grandeur and Persian artwork, it is considered one of the more beautiful pieces of art alongside Masjid Wazir Khan, also in Lahore.

Dai Anga’s tomb is located inside one of the traditional Mughal-era gardens, Gulabi Bagh, translated as Rose Garden. Not a lot of the garden is left since encroachments of residential buildings seems to have usurped most of it. However, the frescoes have been worked upon at some places, the touching is visible and at most walls and domes, archways and doorways, the paint is chipped, cracked, and needs attention. The walls are weather beaten, and the domes blackened with time.

Inside the quadrangle are two graves, one of Dai Anga and the other of her daughter. The raised platform of the quadrangle suggests the real graves are down below, like Nur Jehan’s tomb, and the top floor merely has a symbolic grave for visitors to offer their respects at.

The tomb of Mai Dai is located in the Kot Khwaja Saeed locality of Lahore, opposite Issa Nagri. Although it has been named Mai Dai, both words which mean Lady, no one actually has ever chronicled or written about the person who is buried within.

A popular but undocumented version is that the tomb belongs to the daughter of Khwaja Saeed, a mahout of Prince Pervez -- Princess Nadira Bano’s father -- whose alleged tomb also lies in the West of Mai Dai’s tomb. Saeed was granted the piece of land by the generous Pervez, and when he was killed by Asaf Khan, he was buried here (Kanhaiya Laal; Tareekh e Lahore).

However, Laal’s claim has been refuted by Judge Latif, a popular historian of Lahore, as well as Abdullah Chughtai.

The establishment of one tomb does not help much in identifying the other, but one thing that the historians are sure about is that the octagonal tomb of the "height of a man" (Latif, 1892) is that of a man, and the other designed with the same octagonal shape but of a unique elliptical dome is of a woman. So far, the tombs of Prince Pervez and its neighbouring Mai Dai have a big question mark on their entities.

From the three tombs under discussion, Dai Anga’s is the best kept. These lesser known, and lesser attended tombs of Lahore need attention and research. Women from history have faced a lack of in-depth research, and even the precious bodies of knowledge that are scattered here and there contradict each other, leaving a huge chasm in the stories that continue to unfold hundreds of years later every time a chronicler attempts to write about the Mughals.

Of the lesser royalty