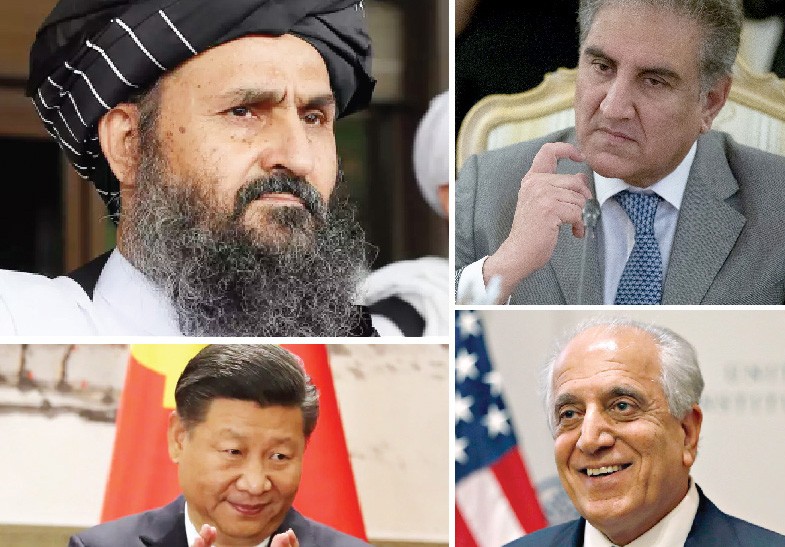 Twice in recent weeks, China figured prominently among countries that actively pursued efforts to pervade the major stakeholders -- the Afghan government and the Taliban -- to engage in the peace process. First, China joined Russia and the US to pledge support for the Taliban-US peace talks, an intra-Afghan dialogue and the fight against terrorism in Afghanistan. Next, China apparently played a key role in enabling Pakistan to join the three big powers to work for their stated goal of bringing the Afghan conflict to an end through peace talks involving all major stakeholders, including the US, the Afghan government and the Taliban.

The consensus demand by these countries, all important in their own right as far as the Afghan conflict is concerned, would pressure the Taliban to give up their refusal to hold direct talks with the Afghan government in Kabul.

This isn’t the first time that China was deemed important in the context of the Afghan peace process. Together with Afghanistan, Pakistan and the US, China was member of the quadrilateral coordination group (QCG) that tried for several months to kick-start the process. China was included in the QCG as Afghanistan and the US hoped it would be able to persuade its close ally, Pakistan, to play a more positive role in the context of the Afghan conflict by bringing the Taliban to the negotiating table. The QCG was never formally disbanded. However, after failing to contribute to the peace process in Afghanistan, it appeared to have outlived its utility.

China has also sought to play the peacemaker in the context of Afghanistan-Pakistan relations. Taking advantage, of its friendly relations with both Afghanistan and Pakistan, China has been trying to bring the two countries closer by launching a tripartite commission set up as a part of its initiative to discuss bilateral issues and disputes.

To-date China has backed every Afghan peace initiative. It supported the Taliban-US talks being held in Doha, Qatar. It also backed the intra-Afghan meetings hosted by Russia in Moscow.

While China has been taking keen interest in the developments in neighbouring Afghanistan for long, its role in promoting the Afghan peace process came to notice first in early 2015 when it coordinated with Pakistan to host a meeting between a Taliban delegation and Afghan government officials in Urumqi, the capital of Xinjiang province. This proved a forerunner to a meeting between Afghan government functionaries and Taliban representatives in Murree in July 2015. Chinese and American diplomats were allowed to sit in as observers in the landmark one-day meeting.

It is clear that China would continue to play a role in the Afghan peace process. No country acting alone can make it happen. Facilitating the peace process has to be a shared responsibility. However, China is uniquely placed to use its influence with Kabul and the Taliban and its friendly relations with Pakistan to play a constructive role in promoting peace in Afghanistan.

Earlier, in July 2014, China had appointed a senior diplomat, Deng Xijun, as its special representative for Afghanistan to focus attention on its neighbouring country and play a role in the events unfolding there. It always had this concern about infiltration by the Afghan and foreign militants based in Afghanistan, particularly in the northern provinces where the Wakhan corridor extends up to the Chinese border. China worried that militants from Afghanistan could influence Chinese Muslims, largely the Uighurs, by harbouring and supporting the separatist East Turkestan Islamic Movement (ETIM). It was, therefore, not surprising that China carried out robust security patrolling on its border with Afghanistan.

To tackle the threat from the ETIM, its ally Islamic Movement of Uzbekistan (IMU) and also al-Qaeda, the Islamic State of Iraq and the Levant (ISIL) or Daesh, and some of the Pakistani militant groups, China has sought cooperation from Afghanistan, Pakistan and other neighbouring countries. China has taken tough measures against the ETIM, holding it responsible for acts of terrorism in China. It has also launched a controversial de-radicalization programme under which Chinese Uighur Muslims are put up in rehabilitation and re-education camps.

China has maintained working relations with both the Afghan government and the Taliban. It has provided economic assistance and supplied light weapons to the Afghan government. It has also made investments in Afghanistan in copper mining, and the oil and gas sector and would invest more resources once the security situation improves. There were reports that Kabul was cooperating with Beijing to tackle the ETIM and its allied militant groups even though it isn’t easy considering the security challenges faced by the Afghan government. Beijing already has plans to extend the China-Pakistan Economic Corridor (CPEC) to Afghanistan and fund infrastructure projects once peace is restored there.

Far more interesting are China’s contacts with the Afghan Taliban. The contacts were first established when Taliban rose to power in the mid-1990s. Pakistan was reportedly the go-between for establishing and sustaining these contacts. The Taliban movement’s founder and supreme leader Mullah Mohammad Omar remained a recluse during the Taliban rule for nearly six years. However, he agreed to meet Chinese diplomats. This explains the Chinese clout with the Taliban. It is for the first time that China has become a peacemaker in an external conflict. Both the Afghan government and the Taliban trust its role.

Recently, the Chinese government for the first time publicly acknowledged that a Taliban delegation had visited China. Taliban delegations have reportedly paid a few visits to China in the past as well but those were not acknowledged. As a growing number of countries are now openly establishing contacts with the Taliban and inviting their representatives for visits, China too has gone public and acknowledged the visit by a 13-member delegation led by Mullah Abdul Ghani Biradar, the head of the Qatar-based Taliban Political Commission and deputy leader of the group. A Chinaese foreign ministry spokesman has said the visit was part of its efforts to promote peace and reconciliation in Afghanistan and facilitate the intra-Afghan dialogue. The visit took place in mid-June. The Taliban representatives met unidentified Chinese officials. According to a senior Taliban delegation member Mullah Abdul Salam Hanafi, the Chinese government provided a special plane for their use during the visit.

It is clear that China would continue to play a role in the Afghan peace process. No country acting alone can make it happen. Facilitating the peace process has to be a shared responsibility. However, China is uniquely placed to use its influence with Kabul and the Taliban and its friendly relations with Pakistan to play a constructive role in promoting peace in Afghanistan. China’s relations with the US are far from friendly, but on Afghanistan they share the same concerns. Both want to deny its space to militants and terrorists threatening their security.