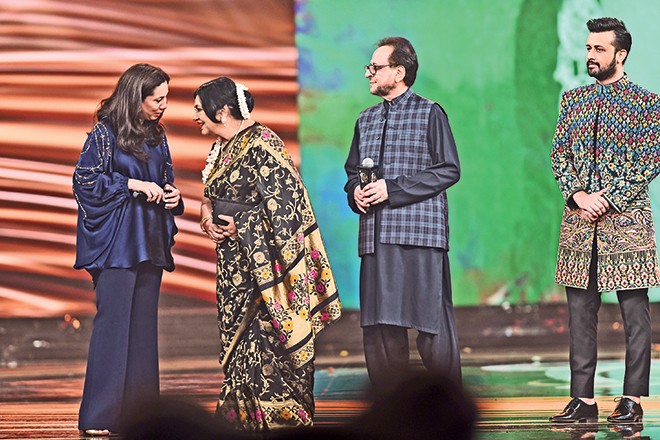 The 18th annual Lux Style Awards - #LSA2019 - held last week in Karachi, left everyone with major ophthalmological challenges. Would people be able to see this glass as half full or half empty? And the answer, as in most cases, lay in perspective. It depended on who you spoke to - winner, or loser.

There was enough encouragement to rising stars and homage to legends as far as the show’s core values went but at the same time there were several upsets, snubs and disappointments when it came to the judging system and subsequently, several award winners. Most of the dances may have been foot-tapping and fun but the script wasn’t as engaging. In playing it super safe - a measure taken to prevent the various controversies that in previous years had emerged due to politically incorrect statements made on stage - the LSAs unfortunately fell into a safe and unexciting zone. And Yasir Hussain, one person responsible for making one of the most objectionable comments a couple of years ago, walked away with the limelight, regardless.

Taking perspectives into consideration, let’s begin with the first impression - the opening act. Momina Mustehsan, who was listed as one of a hundred of the world’s most inspirational women in 2017, was joined by Liyari rapper Eve B to perform on a feminist anthem titled ‘Rukay Naa Rukay’. Despite the rapper’s powerful visual presence (she covers her face for anonymity) and the strong message it delivered, the song, which was written, directed and produced by Momina Mustehsan, made for one of the weakest LSA openings ever.

Momina Mustehsan may sit and even sound pretty next to Rahat Fateh Ali Khan but she’s not a performer or dancer, which is fine until she’s thrust upon an audience with sky high expectations. Watching those expectations plummet was not pretty and the moment was perhaps saved by the fact that people had, just moments ago, been awestruck by the instrumental and soulful version of the National Anthem played by a young four-member band. Grehan The Band actually gave us the goosebumps that the opening act was expected to. They were a very welcome addition to the lineup.

Not everything in the show was as inspirational though.

Comedy has always been the LSAs’ backbone, engaging people and making the five-hour long show tolerable. Script writers and presenters like Vasay Chaudhry, Yasir Hussain and Ahmad Ali Butt have always delivered hilarious albeit not always politically correct moments. Their energy was grossly missing this year; they need to return to resuscitate the LSAs’ joie de vivre.

And while the LSAs have made the multiple-presenter format a recent thing, one would strongly urge the show to bring back the one ‘host of the evening’ arrangement. Fahad Mustafa, with his mega star persona, his comfort level with most artistes in the industry, and his undeniable stage presence would have made an ideal choice and while he did take over for a while, he was soon replaced by several co-hosts, none of which had the charisma or chemistry to strike a relationship with the audience. To be a good actor or performer is one thing but to be able to host a show and hook a difficult audience is a completely different ballgame.

What the hosting lacked, luckily the few latter performances made up for. The musical tribute to legendary actress Shabnan, who was flown in from Dhaka for the Unilever Chairman’s Lifetime Achievement Award, was a mood-lifter as Lux girls Meera (who performed with Asad Siddiqui), Maya Ali and Saba Qamar performed to her hit numbers while Atif Aslam serenaded the audience with ‘Mujhe dil se na bhulana’ and in classic Atif style, paid his respects and accompanied Shabnam to the stage. Shabnan was joined by her popular onscreen hero, Nadeem, and their reminiscences did induce a standing ovation and emotional tears amongst the crowd. It is moments like this that define the LSAs and engrave them in history year after year.

In paying respect to the veterens, Feroze Khan, who won Best Actor - Viewer’s Choice for Khaani, took fellow nominee Qavi Khan onstage and dedicated his award to him.

Another touching segment was the montage for people who are no longer with us and left us for the heavens last year. Instead of simply reading out names, the narrator read out a line of what defined those names and it was an emotional journey through time and history.

By the end of the evening the closing performance, a medley to Load Wedding songs performed by Fahad Mustafa and Mehwish Hayat, came as the sizzler the show desperately needed. Fahad and Mehwish have undeniable stage presence and chemistry and it was a pleasure to watch them perform.

One cannot appreciate the show’s two major acts, mentioned above, without acknowledging the expertise and hard work of ace choreographer Nigah jee. Nigah, who has been associated with Pakistani films for years, lives in Lahore and trains dancers there, had brought with him a troupe of 40 girls and boys. He had been rehearsing tirelessly with the stars as well as the background dancers for days and the result was well choreographed, completely in sync performances. It was both a delight and an honour to see Nigah in action and his dances took a life of their own, fortified by Nomi Ansari’s vibrant costumes.

Over to the awards.

Nine out of the 28 Lux Style Awards handed out are for fashion and unsurprisingly, fashion awards are also, always the most openly criticized. While a star as big as Humayun Saeed (who was not nominated and neither did his film, JPNA2 lift the big trophies) took to twitter to gracefully congratulate the winners, most of the fashion industry - nominees that had lost - dedicated their Facebook statuses to lashing out at the awards and their unfairness. As a long-standing jury member, I’d just like to point out that the journalists on the jury form Tier 1, which determines the nominations. Tier 2 of the jury - all active people from within the industry - vote to select the winner. So maybe all those people complaining should be looking within, at the fairness or unfairness of the industry itself.

Something more has to be said of the undignified way most of the fashion industry behaved that night. One was shocked to see so many ‘fashion’ people leaving/walking out just as Nabila’s Lifetime Achievement Award was being read out. It was appalling that they could not wait, clap and give respect to the woman who has given more than three decades of her life to building a legacy and who makes them look good event after event. It did make one wonder: if these people can’t acknowledge the hard work of someone like Nabila, then how was one to trust them with casting a fair vote on the jury?

The rest of the awards presented some predictable and some uncomfortable overturns but such is the case every year. TV: People were expecting Iqra Aziz to win Best Actress - Viewer’s Choice but not Critic’s Award and no one was expecting Suno Chanda to lift the trophy for Best TV Play. It was shocking that Faisal Qurayshi and his character in Haiwan didn’t even make the list, neither did Yumna Zaidi for her portrayal of the sexually harassed Sila in Dar Si Jati Hai Sila. Film: It was surprising that Jawani Phir Nahi Ani 2 did not win a single award. Best Film went to Cake and was presented by President of Geo Network, Imran Aslam. Music: It wasn’t surprising but unfortunate that the jury had decided not to vote for Ali Zafar in the Best Playback Singer category as Teefa in Trouble’s music was undoubtedly very strong. There should have been uniformity in the policy across the nominations; inclusion or exclusion because of the Ali Zafar versus Meesha Shafi sexual harassment case that is sub-judice as we speak. Ali Zafar did win Best Actor for Teefa in Trouble - Viewer’s Choice though and the net result was confusion.

Fashion: It would have been refreshing to see a new name go home as Best Female Model, but honestly speaking, Sadaf Kanwal’s win made just as much sense. Shahzad Noor winning Best Male Model, however, was a major upset, especially in the presence of Aimal Khan, Hasnain Lehri and newcomer Champ Immi, who all stand out.

Technical mismanagement further marred the evening but those are errors that will be ironed out before the show goes on air.

To wrap it up, this year’s Lux Style Awards delivered a mixed bag, but made one thing glaringly clear: Pakistan’s fashion and entertainment industries are growing by leaps and bounds and at the end of the day, that’s what matters. When they started out 18 years ago, there were barely enough names to fill the slots; now, there is an ocean of work that defines fashion, film, television and music. Do the Lux Style Awards have room for improvement? Of course they do. But have they come a long way from where they started? They have, and you just need to have the perspective and the vision to see it.

The show will air on Geo TV network in early August.

(All Lux Style Awards images in this issue by Faisal Farooqui at Dragonfly.)