The recent shootout at Allama Iqbal International Airport raised many a question as to how did the armed men make it to inside a high-security zone, while especially highlighting how Lahore has often been terrorised by gangs of hardened criminals 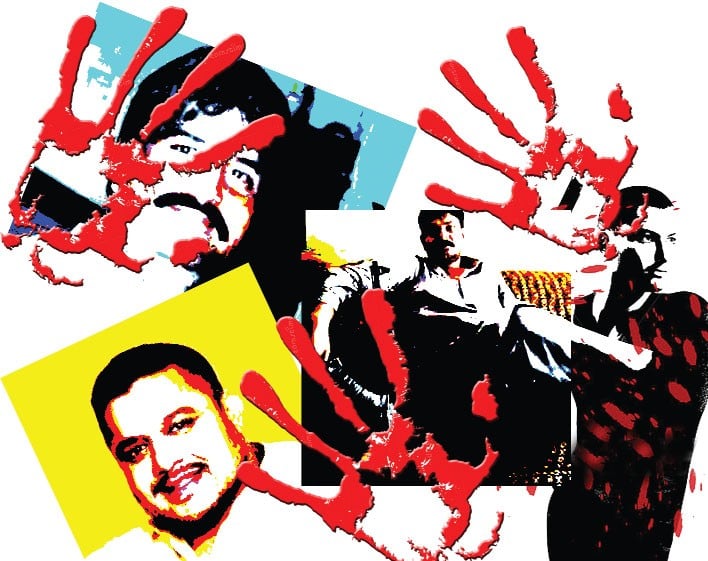 Last week, a 30-year-old man named Zain Ali was killed reportedly by gunmen, smack in the premises of the Allama Iqbal International Airport. A case was registered on the complaint of the deceased’s uncle, against seven suspects, including the brother of slain former PPP Lahore General Secretary Babar Butt.

While the incident raised many a question as to how did the armed men make it inside a (supposedly) high-security zone, it also brought to light how Lahore has often been terrorised by gangs of hardened criminals comprising drug pushers, kidnappers, paid assassins, land grabbers, extortionists, and even student leaders.

These criminals have largely existed in pockets of the interior city, and thrived on the power of the gun which also won them many ‘influential’ friends in political and bureaucratic elites. They are known to move around armed with automatic weapons and under the watch of dozens of guards who would follow them in the form of a motorcade.

No wonder the law-enforcing agencies are loath to nab them. If these gangsters are caught at all, the investigations are often so weak that they come out with a clean chit. Many of them are eventually killed in police encounters -- believed to be ‘staged’ (read extrajudicial).

Their real-life stories are so ‘colourful’ -- to put it euphemistically -- that some of these even became subjects of motion pictures. Consider, for instance, Noori Natt, the iconic villain from 1979’s Punjabi blockbuster, Maula Jatt. Screenwriter Nasir Adeeb has often related how the character and the situations (as well as some dialogues) were inspired from his own experiences growing up in the midst of family rivalries, the culture of revenge, and bloodshed, in rural Punjab.

Police records speak of a gangster named Noori Nath and his son Zafri Nath. The latter was killed, along with four others, at Lakshmi Chowk, in 2014, as a result of an old enmity that claimed many other lives too.

Zafri was part of a gang led by Kalu Shah Puria, a rival of Malik Nisar Khokhar. Puria and Khokhar were relatives but fell out over a property dispute. The feud cost the Nisar family a great deal, as they are now survived by only one male member.

If these gangsters are caught at all, the investigations are often so weak that they come out with a clean chit. Hence, many of them are killed in police encounters -- believed to be ‘staged’ (read extrajudicial).

They are believed to be responsible for a foiled assassination attempt on Arif Ameer alias Tipu Truckanwala, outside the Evacuee Trust Property Board building in May last year. This was the second such attempt, and took at least five lives in the shootout, while eleven others were injured, including Tipu. The murder of Zafri Nath and four others is believed to be related to this incident. Tipu, accused in the case, claims he was only nominated so that he would give in to pressure from Gogi Butt and Teefi Butt and withdraw complaint against them (in the Evacuee Board case).

Tipu is the son of Ameeruddin alias Billa Truckanwala, a man of strong build who dealt in goods transport in the 1990s. He had connections with the VIPs of Lahore including Ilyas Jutt, and Bheela Butt. He was also said to be very close to DSP Sultan Garah, SP Chaudhry Shafqat, DSP Iftikhar Goga, SP Aslam Sahi, and others. Top guns of the underworld such as Hanifa, Baba, and Shahid Butt used to take shelter at his dera.

Shahid Butt was a brutal killer who had previously worked as a tailor in Kuwait. He had two brothers who lived in Shahdra. One of his brothers was killed by his step aunt, Hajan Hassa, and her sons. His second brother, Qaisar Butt, was killed by Atta Jutt and Dogar brothers. Shahid returned home to seek revenge, eventually killing all Dogar brothers except one.

He murdered countless people for Chaudhry Ilyas Jutt and later started killing for money. Finally, he was shot down in a fake encounter by the Iqbal Town police. It is said that he was staying with a very close friend who turned out to be a police informer.

In much the same way, Billa Truckanwala was killed by Hanifa and Baba at his dera. Billa’s son Tipu then got all of his enemies killed in police encounters.

Some of the criminals have been ‘tarnished,’ in-service police officers. For instance, Abid Boxer (real name Abid Hussain Qureshi), who is wanted in several cases of murder, attempted murder, and land-grab.

A competitive boxer, Abid joined the police in 1988 on sports quota. He soon became ‘infamous’ for deadly police encounters. He is also alleged to have had close association with the former chief minister of Punjab, Mian Shehbaz Sharif, and committed several crimes at the latter’s behest.

Atif Chaudhry, a prominent Muslim Students Federation (MSF) leader in the 1980s, was also allegedly close to Shehbaz Sharif. He had more than a hundred cases against him and a number of police encounters, three of which were with Abid Boxer. His first encounter with Abid Boxer happened in Riwaz Garden in which Assad Prince was killed and Khalid Heera critically injured, while Atif got wounded. He managed to escape.

In his second police encounter, outside the duty-free shop in Lahore, Mehboob alias Lamba was seriously injured and Atif escaped yet again. His last encounter happened with Sanda Police in Rewaz Garden in which Atif was killed.

A students union leader who grew up to become a criminal, Atif’s life was made into a Lollywood movie, Atif Chaudhry (2002), which starred actor Moammar Rana in the titular role.

Legend has it that Bakar Mandi’s butchers would pay Jagga Gujjar one rupee per every goat they slaughtered.

Son of Chaudhry Buddha Khan Raees Gujjar, Jagga was the first person who was apprehended after the Goonda Act came into effect. He was eventually killed by police, and his body was thrown somewhere on Multan Road. Jagga’s follower, Kaka Lohar, was also killed in the encounter.