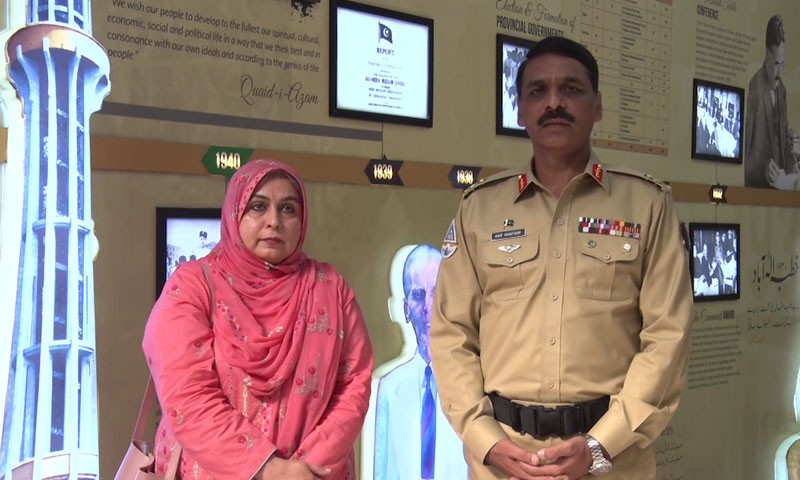 Recently, Amina Masood Janjua, chairperson of the Defence of Human Rights in Pakistan -- an independent organisation working for the release of missing persons -- met with the director general of Inter Services Public Relations, Major General Asif Ghafoor. While appearing in a video alongside Ghafoor, Janjua said that the Army has provided assurances that they will search for Masood Janjua, her husband who has been missing since July 30, 2005.

During the meeting with Janjua, Asif Ghafoor disclosed that a special assistance cell was working at the General Headquarters (GHQ) on the cases of missing persons.

Other than giving only a slight hope to the families of the missing, such statements ring hollow. For the issue of missing persons is complex and it is unlikely to be settled any time soon.

Thousands of persons have gone missing in the last several years. The agencies have often denied that the ‘victim’ is in their custody. There is no way to verify the facts which has made the issue even more complicated. Even when the victim quietly reaches home or is ‘dropped’ by the abductor, the court hardly takes any action on its own. The family or victim also does not seek action. This is the most unfortunate part of the cases of missing persons, whether they belong to a political party, an ethnic or a sectarian group or have links with a global terror network.

In the post-9/11 scenario, many people detained at Guantanamo Bay or Abu Ghraib were freed without being charged after years in custody.

In Pakistan, the parties that have raised their voices against such disappearances include Baloch nationalist parties, different factions of MQM and Sindhi and Pashtun nationalist groups. Several attempts have been made to resolve the issue but with little success.

Lately, two coalition partners of Pakistan Tehreek-e-Insaf (PTI), Balochistan National Party-Mengal (BNP-M) and Muttahida Qaumi Movement-Pakistan (MQM-P) supported the government on condition that the government will take up the issue of missing persons on priority. "It’s the most touchy and sensitive issue for our people," says chairman BNP-M, Akhtar Mengal.

The list of missing persons belonging to the MQM-P has dropped from 200 to 114, as others have returned home after being freed. "We succeeded in getting some of them freed and hope all will return home, safely," says MQM leader, Faisal Sabzwari.

This is the dilemma of a society where there is no rule of law. There is no mechanism available for seeking information about these people, except when a court or a government chooses to intervene on their behalf. The victims return home but never narrate their stories. No wonder, just as some people return home, others go missing.

Pak Sarzameen Party (PSP), which was formed by the former leaders of united MQM, Mustafa Kamal and Anis Qaimkhani, claim that since the making of the party, they have succeeded in recovering 240 out of 500 missing party workers. "It’s a long list. I am glad those not involved in heinous crimes have been freed," confirms Kamal.

These party leaders avoid giving further details about the cases as it may damage the ongoing process of recovery.

There are four shades of missing persons: white, grey, black and jet black. Those freed are categorised as white. The BNP-M men who reached home were mostly in the white list.

Those who fall in the grey category have to face trials after months or years. But they are presented as fresh arrests in the court. There are scores of such cases.

Off the record some advocates for the establishment take the position that those involved in terrorist or anti-state activities have to be detained pending investigation.

Senator Mir Hasil Bizenjo of National Party (NP), which is now in opposition, doubts if the issue will be resolved. He recalls when former prime minister Nawaz Sharif nominated Dr Abdul Malik as chief minister Balochistan, "We told Mian Sahab that there are three major issues where we need his intervention -- bullet riddled bodies, missing persons and the presence of private armies in the province."

He adds, "Mian Sahab arranged our meeting with the then army chief Ashfaq Parvez Kayani".

He remembers the first meeting that lasted for over six hours. "The ISI and MI chiefs were also present in the meeting. We had an open discussion. General Kayani assured us that he would look into the matter more seriously."

The establishment, Bizenjo says, has strong reservations over the activities of some nationalist groups, whom they believe have been "playing in the hands of foreign powers, particularly India".

I still remember what exactly happened during the investigation of suspects in Daniel Pearl case. Police and Intelligence agencies arrested dozens of people in a swift operation because of unprecedented pressure from the US and finally charged and convicted four of them. At least three suspects were kept in custody for years. They were never charged in the case. Later, one of them, Saud Memon, whose compound near Sohrab Goth in Karachi, was allegedly used for slaying Pearl, was produced in the Supreme Court on a stretcher. He died weeks after the court ordered his release.

The case of PML-N leader Siddiqul Farooq is unprecedented. He was picked up by the NAB during Musharraf’s period and was kept in custody for three years. When his family filed a petition in the Supreme Court, the then Attorney General surprised the court with a statement on behalf of the NAB -- that they had forgotten he was in their custody.

While human rights groups like Human Rights Commission of Pakistan and other watchdog bodies continue to raise the issue, it appears nobody can dare ask all the important questions, who picked these persons and why?

This is the dilemma of a society where there is no rule of law. There is no mechanism available for seeking information about these people, except when a court or a government chooses to intervene on their behalf. The victims return home but never narrate their stories. No wonder, just as some people return home, others go missing.