The languages of northern Pakistan

Dominant languages in the region like Pashto and Urdu along with the language of globalisation, English, are replacing endangered languages through formal education and media 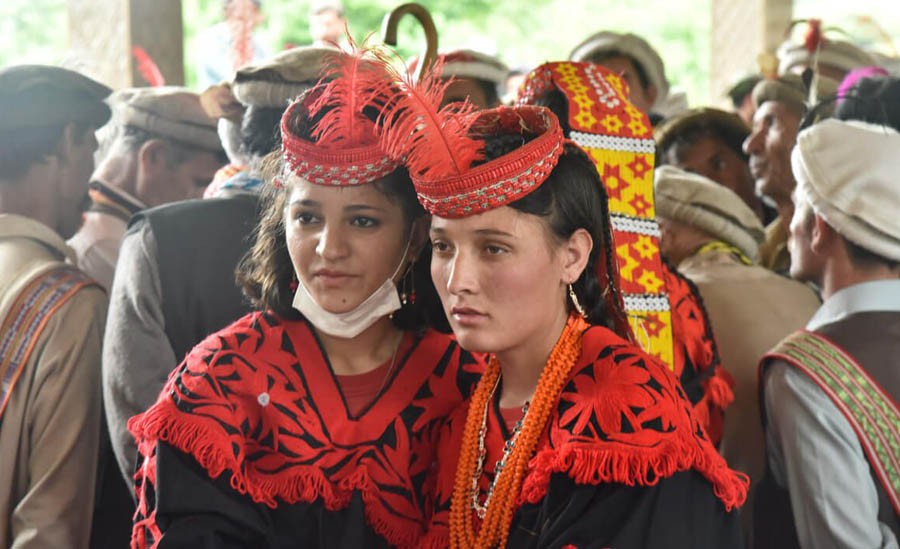 Early in May this year, scholars, writers and activists from the mountain communities of north Pakistan gathered for a day in Bahrain, one of the scenic towns of Swat, to deliberate on the sociocultural, socioeconomic and sociopolitical challenges facing these communities. The one-day gathering was organised by a local organisation, Idara Baraye Taleem-o-Taraqi (IBT), in collaboration with The University of Sydney.

No government institute or university has ever taken the initiative to profile the languages spoken by the people of Pakistan. Only a few of them -- Urdu, Pashto, Punjabi, Balochi, Sindhi and Seraiki -- are mentioned in the media, teaching materials and the national database. According to Ethnologue, an informative compendium of the languages of world, there are 74 languages spoken in Pakistan. This database is maintained by an international organisation, SIL International. Past attempts at profiling the languages of Pakistan have been undertaken by researchers associated either with the British government or some international organisations.

Irish scholar, Sir George Abraham Grierson, who served in the Indian Civil Services and died in 1941, did a remarkable survey of about 364 languages and dialects of India and published the work in 19 volumes following field research spanning over 30 years. The work was titled Linguistic Survey of India. It was published from 1903 to 1928. It included information about some of the languages spoken in the mountainous region of Pakistan.

Before Grierson, the famous orientalist and educationist, Gottlieb Wilhelm Leitner, did some linguistic and anthropological work on the languages and people of these areas in a book called Languages and Races of Dardistan (1877). Following Leitner, another officer in British Army, John Biddulph, published his work on the languages and peoples of these areas in a volume called Tribes of Hindoo Koosh (1880). Since then a number of notable linguists and anthropologists such as Georg Morgenstierne, Karl Jettmar, D.L.R. Lorimer, Frederik Barth, Colin Masica and Richard Strand have studied the languages and cultures of northern Pakistan and of Afghanistan.

A systematic survey of the languages of northern Pakistan was started in 1986 by Summer Institute of Linguistics under the auspices of the Ministry of Culture, through the National Institute of Folk Heritage, also known as Lok Virsa. The National Institute of Pakistan Studies (NIPS), Quaid-i-Azam University, Islamabad, facilitated the research and the survey was jointly published in five volumes in 1992.

The survey titled Sociolinguistic Survey of Northern Pakistan covered 25 languages of Northern Pakistan including Pashto, Hindko, Ormuri and Waneci. The preface of the survey admits, "At a macro level, this work is definitely an improvement over Grierson’s linguistic survey of India and the subsequent studies by various scholars."

All of these languages are categorised as ‘endangered’ in the Routledge’s Encyclopedia of World’s Endangered Languages (2008) edited by Christopher Moseley. Many of them are ‘severely endangered’ whereas a few are ‘moribund’ or ‘extinct’.

It ‘was’ an Indo-Iranian language spoken by a few hundred people in a faraway village in the Chail valley to the east of the Madyan town in Swat. Last year, BBC Urdu reported that there were only three speakers of the language remained. In reality even the three elderly people do not speak this language. It is already extinct.

Balti is a Tibetan language spoken by the Balti people in four districts -- Skardu, Shigar, Granche and Kharmand -- of the Baltistan division of Gilgit-Baltistan region. There are, however, some small villages in the valleys of Kharmang, Rondu and Skardu where the major language of Gilgit Baltistan, Shina, is spoken, too.

Bateri is a Dardic language spoken by people living in the area of Batera on the east bank of the Indus River in the Lower Kohistan district in Khyber Pakhtunkhwa. This area is in the southernmost part of the Kohistan region to the north of and across the river from the Pashto-speaking town of Besham.

It is the single ‘language isolate’ in Pakistan as it has not been classified under any of the major or sub groups of languages. It is not related to its neighbouring languages, Dardic or Iranian. It is spoken in the Hunza and Nagar districts and in the Yasin valley in the Ghizer district of Gilgit Baltistan.

It is a Dardic language which is now moribund. It is spoken in scattered villages on the right bank of the Indus River in the midst of the majority Shina-speaking population on eastern side of the Kohistan district in Khyber Pakhtunkhwa.

Dameli is a Dardic language spoken in the Damel valley which is situated between Drosh and Arandu, about 20 kilometres south of Drosh in Southern Chitral.

Domaaki is a language spoken by a small community living in scattered villages in Hunza and in Nagar. The people have recently renamed it as Dawoodi. It is an endangered language.

Eastern Kativiri is one of the Nuristani languages. In Pakistan, it is spoken in Lutkuh Valley and by some people in Bumboret, Rumbur and Urtsun villages of the Chitral district.

Gawarbati is another Dardic language spoken by the people living along Chitral River, predominantly in the Afghanistan-Pakistan border area near Arandu village in Chitral district.

Gawri is another Dardic language spoken in the hilly villages in the districts of Swat and in Upper Dir district. The most famous touristic destinations, Kalam in Swat and Kumrat in Upper Dir are owned by people speaking the Gawri language. In Swat, the main Gawri villages are Kalam, Utror, Mititan and Ushu. In Upper Dir the villages where Gawri people are in a majority are Thal, Lamuti, Biar and Birikot in the Kalkot Tehsil, also referred to as Dir-Kohistan or Kohistan of Dir.

Gojri is the language spoken by the nomadic Gujjars in various parts of Pakistan. It is also spoken in scattered villages in Gilgit Baltistan, Chitral, Dir and Swat.

The Gowro is believed to be the language of the Gabar Khel clan living scattered in some of the villages in the eastern Kohistan region in Khyber Pakhtunkhwa. It is also a moribund Dardic language. Gowro should not be confused with the language Gawri spoken in Upper Swat and Upper Dir district.

Many people in Pakistan are aware of the Kalash people living in three valleys in Chitral. A Dardic language, Kalasha-speaking people are concentrated in several small valleys on the west side of the Chitral River south of Chitral town: in the Rumbur, Bumboret, Birir and Urstun valleys of Chitral district.

Kalkoti is an endangered Dardic language spoken by a small number of people in Kalkot village in Kalkot tehsil of Upper Dir.

Shekhani is a term used by most people in Chitral for both Eastern Kativiri and Kamviri speakers. Shekhani means ‘the language of the sheikhs, or converts’. It is spoken by a small population in the Langorbat and Badrugal villages in Chitral.

Khowar is the major language spoken in Chitral. It is perhaps the second largest Dardic language in Pakistan. It is also spoken in certain villages and valleys in the Ghizer district of Gilgit Baltistan.

Kohistani is one of the major Dardic languages spoken mainly on the west bank of the Indus River in the Kohistan region including Kandhia valley adjacent to Diamer district of Gilgit Baltistan. Some ancient writers have mentioned this language as Maiya or Shuthun. It is also known as Indus Kohistani.

Madaghlashti or Madakhlashti is an Iranian language spoken by a small population in the Madakhlasht village in the Shishi Koh valley in Chitral.

Mankiyali is an endangered Dardic language spoken by a few hundred people in the Danna village in Mansehra district. The language was added to Ethnologue last year.

Palula is a Dardic language spoken by a small population in a number of villages on the east side of the Chitral Valley near Drosh in southern Chitral. Ashret, located on the main road between Dir and Chitral, just below the Lowari Top on the Chitral side, is the main village of Palula people. Another valley above Ashret is Biori where Palula is spoken.

Shina is the largest Dardic language alive today. It has multiple dialects and variations. It is the major language of Gilgit Baltistan too. Among all the Dardic languages the most literature is found on Shina. It is spoken in Gilgit city, Puniyal, in villages of Ghizer district, in Shinaki area connected to Hunza and in Astore and in Diamer districts of Gilgit Baltitsan. It is also spoken in Eastern Kohistan region, on eastern side of the River Indus.

The speakers of Dardic language Torwali live in the main Swat Valley as well as in one of its tributaries, Chail Valley. These two valleys join at Madyan, a Pashto-speaking town just eight kilometres below the scenic Bahrain which is the business and political centre of the Torwali people. Towards north, Torwali is spoken up to Asret although some Torwali people also live in Laikot, Peshaml and Aryanai near Kalam.

With a small number of speakers, this severely endangered Dardic language is spoken in the villages of Kas, Kardial, Bishigram, Tangai Banda and other smaller hamlets in the Chail valley to the east of Madyan town in Swat. Each Ushojo village has Torwali speakers. Bishigram also houses Pashto-speaking people.

An Iranian language, Wakhi is mainly spoken in Gojal and Hunza in Gilgit-Baltistan region. However, a small number of Wakhi-speaking people also live in Yasin valley in the Ghizer district of Gilgt Baltistan. It is also spoken by a small population in the Yarkhun valley of Chitral.

Yidgha is an Iranian language. In Pakistan, it is spoken mainly in the Lutkuh valley of western Chitral. There are probably 15 villages of the Yidgha speakers in the Luktkuh tehsil between Garam Chashma and Darosh pass in Chitral.

On the other hand, if these languages are left to their fate, the communities using them as native languages, and have been using them for social interaction and as semiotics of their weltanschauung are sure to lose their past memories, histories, and identities and thus be exposed to manifold vulnerabilities such as loss of self-esteem, crisis of belonging and identity; and loss of imagination which is so intrinsically embedded in the languages they learn in their communities.

There is an urgent need to revive these sleeping languages using modern means and tools. The foremost step is to build literacy in these languages because the written medium not only keeps a language alive but also enhances its prestige among the communities. As the Latin proverb states, ‘Verba volant, scripta manent’ (spoken words fly away, written words remain), these languages are now ‘verba volant’ and are soon going to be ‘volant/extinct’ if they are not made ‘scripta’/written.

The languages of northern Pakistan