Federer, Djokovic set to battle it out for Wimbledon

Of the Big Three, Federer has the easiest route to the final and Nadal the toughest. However, Wimbledon can throw massive surprises during the first week with potential giant-killers emerging and conjuring upsets 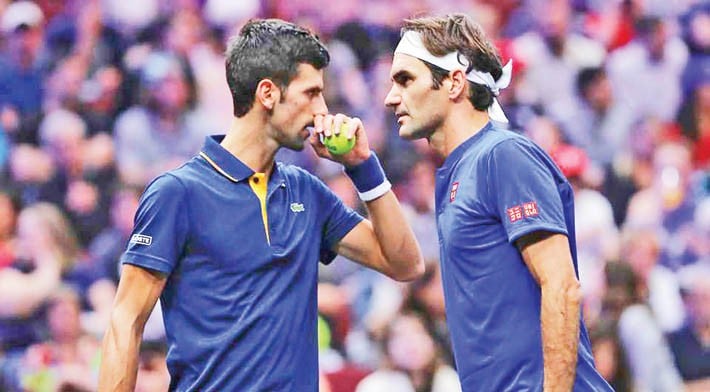 It has been 17 years since any man other than Roger Federer, Novak Djokovic, Rafael Nadal or Andy Murray won Wimbledon. Last year, it was the Serb who broke his two year barren spell at the majors to win a fourth Wimbledon crown, eventually initiating a Grand Slam run that wasn’t broken till Dominic Thiem’s win over him at Roland Garros. And with Murray only in the doubles contest this year, the odds are heavily stacked in favour of one of the Big Three winning Wimbledon this year.

As the Championships begin at SW19 on Monday, the battle for the crown is likely to be between Federer and Djokovic. With Wimbledon seeding the World No 3 Swiss maestro second ahead of Nadal, both Djokovic and Federer will be in the opposite half and can only meet in the final - just like they did in 2014 and 2015, with the Serb coming out on top on both occasions.

Federer’s bid to win a record extending 9th Wimbledon and 21st major were bolstered by his triumph in Halle last week. Unlike the previous two seasons, where he had skipped the clay court season in its entirety to boost his chances at Wimbledon, Federer decided to participate in Madrid, Rome and Roland Garros this year. The move seems to have paid dividends, with the World No 3 having more match play under his belt heading into SW19 - something that he lacked last year, resulting in his shock quarterfinal exit after being two sets to love up against Kevin Anderson.

After a sensational start to the year, where he swept away Nadal in the Australian Open final, Djokovic has had a below par five months. His only other title this year has been the Madrid Masters, with a resilient Thiem having got the better of him at the French Open semifinal. With the clay swing having culminated, the World No 1 would now look to find his mojo again that saw him win back to back majors last summer.

Nadal, meanwhile, hasn’t made it to a Wimbledon final since playing five successive finals at the Championships from 2006 to 2011. With continued, and well documented, struggles for the Spaniard from 2012 to 2016 on grass, Nadal has showed his best form on the surface since 2011 over the past two years. Last year, the World No 2 was a point away from serving for a place in the final, as he lost to Djokovic in the semifinal in one of the most memorable clashes at Wimbledon in recent memory.

Even though the noise from the Nadal camp has been positive after winning a truly staggering 12th French Open title, he has been handed a minefield of a draw at Wimbledon. He could potentially face Nick Kyrgios, Dennis Shapovalov/Jo-Wilfried Tsonga, MaricCilic, Thiem, Federer and Djokovic for a run to the final.

Djokovic has a tough opening round against Philipp Kohlschreiber, a potential fourth round against Gael Monfils or upcoming young gun Auger Aliassime, a likely quarterfinal against StefanosTsitsipas or Daniil Medvedev, and the semifinal against Anderson or Alexander Zverev. The Next Gen might be standing in his way towards another Wimbledon final, but that’s been a challenge that the World No 1 has effortlessly dealt with at majors.

Federer, meanwhile, is projected to meet Lucas Pouille in the third round and BornaCoric - the man who beat him in the Halle final last year - in the fourth round. Federer could meet Kei Nishikori in the quarterfinal, before a possible Fedal semifinal.

Of the Big Three, Federer has the easiest route to the final and Nadal the toughest. However, Wimbledon can throw massive surprises during the first week with potential giant-killers emerging and conjuring upsets.

Nadal would be especially wary of the first week, where he has traditionally been the most vulnerable even during his successful days on grass. The second round clash against Kyrgios, who beat the Spaniard in the fourth round in 2014, will be especially tough. But as showed above, Nadal’s projected draw doesn’t get easier through the rounds, and for him to make it to the semifinal he would probably need upsets in his section of the draw.

Outside the top three, it is French Open finalist Thiem - present is in Nadal’s quarter - who might be the best bet to go the distance. While grass might not be his preferred surface, the Austrian has made it deep into Halle in the past and even has a win over Federer there. After winning his first ATP Masters 1000 at Indian Wells on hard, and making back to back Roland Garros final, Thiem would be looking to prove that he is tough to beat on grass as well.

While Zverev might have the all-court game that would make his a major threat on all surfaces at any tournament in the future, as things stand he still has limited success at the Grand Slam stage. He has a favourable draw to right that over the next fortnight, but hasn’t showed enough to beat one of the Big Three at a major just yet.

A third Wimbledon final between Djokovic and Federer remains the likeliest scenario. The Swiss has the right combination of rest and match-play under his belt to go the distance on grass, while the Serb has reserved his best for the Grand Slam events over the past 12 months.

A Grand Slam winner outside the Big Three might be what the ATP tour needs right now. But the chasing pack might have to wait a little longer.

Federer, Djokovic set to battle it out for Wimbledon