Calculated data confirms that the garden of Chauburji was commissioned by Princess Jehan Ara, who stepped outside of her archetypal role in the Mughal dynasty and became known as an architect, engineer, painter, poet, writer, and activist 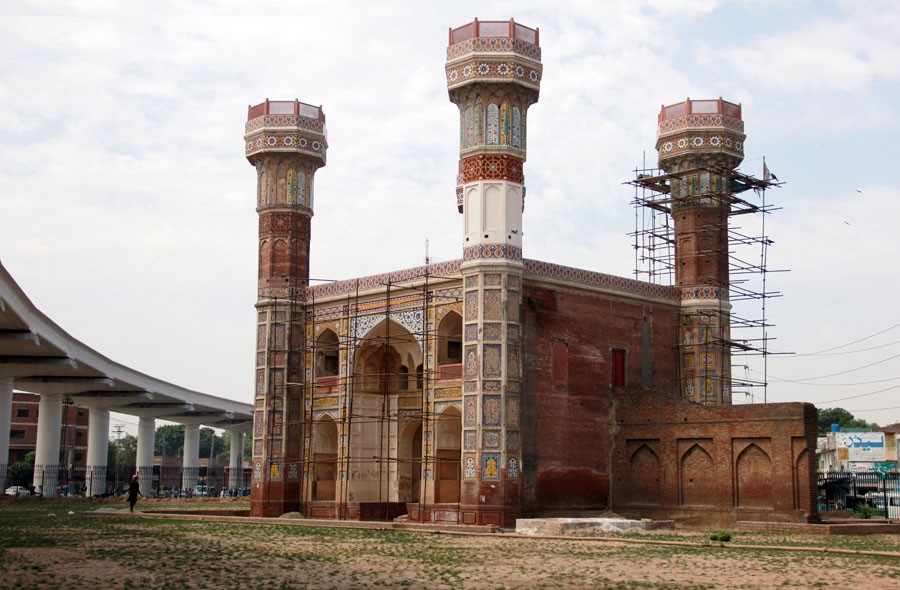 Anyone who has lived in Lahore is familiar with an ancient Mughal structure, oddly placed in the middle of one of the city’s busiest intersections, the Chauburji Chowk. ‘Chauburji’ is a title given to the building because of the four sturdy pillars that stand tall on all its four sides, joined by thick walls, like those of the Delhi Gate inside the Walled City.

Chauburji, too, was a gate of a pleasure garden which has now vanished. Whatever is left of it has a uniquely ‘feminine’ touch to it -- azure blue and sea-green mosaics with holy verses engraved on the walls. There is a grave inside the mysterious dwelling as well, which is said to be that of one Begum Fakhrun Nisa; a lady-in-waiting for the Princess Jehan Ara, daughter of Shah Jahan and Mumtaz Mahal. Calculated data confirms that the garden of Chauburji was commissioned by Princess Jehan Ara.

The conflict of opinion about the construction of Chauburji must be addressed here. Some historians have associated Chauburji with Emperor Aurangzeb’s daughter, Zaibun Nisa whose tomb (another issue of conflict) lies a few kilometres away. However, there are also those who do not agree, since chronologically, Zaibun Nisa could not be more than eight years of age in 1646, the date of Chauburji’s completion. Also, Zaibun Nisa lived in hiding and solitude all her life until her death in the same spot where she is now buried. A princess in hiding would not choose to have a gateway built that could lead to her hideout. Lastly, and more importantly, there is a plaque with an inscription on it, on the doorway of Chauburji, that reads, "Sahib e Zebinda, Begum e Dauran had this built in 1646."

The Bellew Collection of Architectural Views at the British Library holds a picture of the Chauburji from the 1880s, taken by "an unknown photographer," and also records the building to be commissioned by Princess Jehan Ara, as are the Jamia Masjid, Chandni Chowk, Mausoleum of Moinuddin Chishti, the shrine of Mullah Shah, and the Caravan Serai in India. (bl.uk)

Ziauddin Ahmed Berni, the historian who wrote the biography of Jehan Ara, says that the architectural passion of the princess was not limited to the aesthetic aspect of the structures she had commissioned, but she also paid for them from her own pocket. Having said that, Jehan Ara’s pocket was not a mean one, since she was always handsomely paid by the royal treasury, according to Dirk Collier (The Great Mughals and Their India). Starting at a staggering allowance of 600,000 rupees per annum when she was only 14 years of age, until the year of her death in 1681, her yearly allowance had been increased to 1.7 million rupees.

Some historians have associated Chauburji with Emperor Aurangzeb’s daughter, Zaibun Nisa whose tomb (another issue of conflict) lies a few kilometres away. However, there are also those who do not agree, since chronologically, Zaibun Nisa could not be more than eight years of age in 1646, the date of Chauburji’s completion.

She was a princess of course, but the easy flow of money did not stop Jehan Ara to be a woman of substance. She owned factories, according to Berni, and also extensively engaged in trade with the East India Company and brought revenue not only to her personal bank but also to the royal treasury. She had a ship, named Sahibi, which was at sea for expeditions -- she would send people for pilgrimage to Mecca, have sacks of rice distributed among the poor in the holy land, import and export merchandise, and make profits from her business.

Born as the second child to Shah Jahan and Mumtaz Mahal in 1614, Jehan Ara was an immediate favourite of her father who named her ‘The Adornment of the World.’

As was the custom introduced by Mumtaz Mahal, the wet-nurses for the royal children were made part of the household and harem, and the female tutors were hired for the education of the children. The structure of the Zenan -- or Mughal Harem -- changed since teachers, nurses, and guides were included among the wives and concubines of the Emperors. Therefore, Jehan Ara, in the Zenan Khana, was raised among learned women such as Dai Anga, Sati un Nisa Khanam, and Huri Khanam Begum.

This privilege made her the woman she was -- intellectual and poetic, intelligent and business minded. Apart from her being good at earning and spending money in the right way, Jehan Ara was a biographer. The 1920 biography written by Berni and digitised by Rekhta Foundation is a collection of Jehan Ara’s prose and poetic works, her collections of Sufi knowledge as well as the intimate letters between herself and her siblings, especially Aurangzeb to whom she had implored several times, a division of the empire instead of a family feud.

It was Dara Shikoh, Jehan Ara’s favourite brother, who introduced her to the Sufi path and after much insistence, Mullah Shah accepted her as a disciple and during their association, he wanted to name her as his replacement but could not, due to the Sufi order. She wrote the biography of Khwaja Moinuddin Chishti, and titled it Howal Moin, translated in Urdu as Munis Ul Arwah (The companion spirits). Her second book, also a biography, Sahibia, was a recollection of the life and experiences of her spiritual mentor, Mullah Shah Badakhshi, who was a successor to Sufi Mian Mir. Jehan Ara’s flair for writing is evident in the two books, now a part of Shibli Academy in Azamgarh, India.

Jehan Ara was a shadow of her father. She was always close to both parents but she became more affectionate after her mother passed away in Burhanpur and the difficult task of consoling her father as well as the burial of her mother was at hand. She gave the last ritualistic bath to Mumtaz herself, writes Fergus Nicoll. Jehan Ara also encouraged her father to build the Taj since it gave him a motivation.

Indu Sundaresan, in her book, The Shadow Princess, featuring Princess Jehan Ara as the protagonist, discusses the power dynamics inside the Mughal court as well as the Zenankhana right after the death of her mother (Mumtaz Mahal) in 1631. As per tradition, the power of the dead queen should have been shifted to one of the other wives of Shah Jahan, but such was the hold of Jehan Ara over her father’s trust and his court that she became the Badshah Begum instead, much to the disgrace of her step-mothers and her sister Princess Roshan Ara.

Jehan Ara’s rise to power was welcomed by one other person in the family -- Dara Shikoh. Dirk Collier notes that Shikoh had always lived a life of comfort, as compared to Aurangzeb, who was out in the field fighting battles and expanding the empire. Roshan Ara, the youngest sibling, had offered support to Aurangzeb but Jehan Ara stood firm with Shikoh and father’s decision. Once Aurangzeb asked his eldest sister if she would ever think of supporting him, to which Jehan Ara replied in the negative.

According to Andrea Butenshon, who wrote the book, The Life of a Mogul Princess: Jehan Ara, Daughter of Shah Jahan, Dara Shikoh was a source of comfort to her while Aurangzeb caused her turbulence throughout her life.

Indu Sundaresan writes in detail how the power dynamics and politics of the harem shuffled and shifted until Aurangzeb did not topple Dara Shikoh and claim the throne for himself. Roshan Ara, who had supported Aurangzeb, won and the defeated Princess Jehan Ara chose to voluntarily imprison herself with her father Shah Jahan whom Aurangzeb distanced from so much that he did not even attend his father’s burial ceremony (The Great Mughals and Their India).

It is said, however, that Aurangzeb extended an olive branch to her sister after Shah Jahan’s death, and sanctioned a mansion and increase in her yearly allowance.

In his book, Collier addresses some salacious content that was associated with Jehan Ara. She was unmarried because it was the law to not marry princesses. Some alleged that she smuggled lovers in the harem and one goes to the extent of saying that she took the place of Mumtaz Mahal, her mother, in her father’s harem since the bond between the two was very strong. Niccalao Manucci, the Italian historian who had confidence of the ladies in the Zenan, rubbishes all such allegations, saying these were spun out of jealousy for the power and honour Jehan Ara had, which was not enjoyed by any other woman in the palace.

William Wilson Hunter, in his book, The European Struggle for Indian Supremacy in the Seventeenth Century, writes that in March 1644, Jehan Ara’s silken clothes, doused in rich perfume, caught fire from a clay lamp and she was burnt very badly. The doctors in the empire gave up, saying the burns were too severe to be cured. Until that time, the British had arrived in India but were stationed only at the Surat port, and were not allowed to move. One of those ships, HMS Hopewell, had an English doctor on board -- Dr Gabriel Boughton -- who was brought to Agra in haste. The doctor’s magic worked, and although Jehan Ara’s face could never be cleared of the burn marks, her wounds started to heal within weeks.

Grateful, the Emperor ventured to compensate the doctor, who politely refused and only asked for the British traders to be allowed movement to all the ports of India, which was accepted by both Jehan Ara and Shah Jahan. She healed well even after a few glitches of treatment.

Jehan Ara died in 1681, and was buried, upon her request, inside the shrine of Sufi Nizamuddin Aulia in Delhi. It’s a small enclosure that houses her grave. The grave is not even closed from the top but with sand, just the way she had wanted it to be. A piece of poetry, written by herself, is engraved on her tombstone. It reads,

Do not let anyone cover my grave but with green grass

For I am the poor, and only that should be my last cover