Oh that S-word! Why kill it? Why not use it and commit the sin? 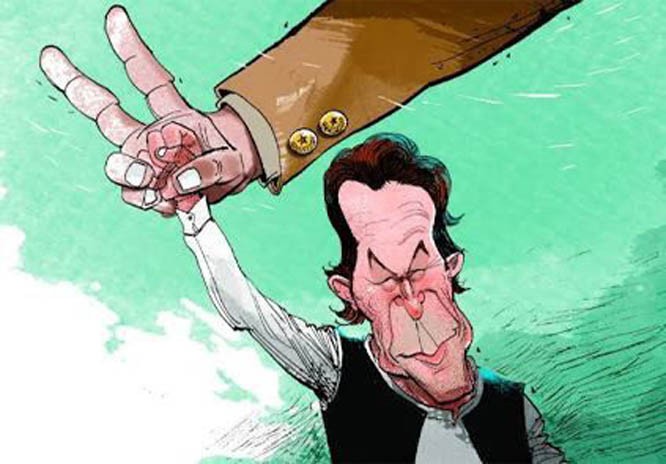 It absolutely does not befit the prime minister to get the deputy speaker to issue a ruling against the adjective ‘selected’ being used for the premier. It reflects narrowmindedness and shortsightedness, and doesn’t factor in the far-reaching consequences of such a move.

What would be more in line with the PM’s pedigree, performance and definitely his preference, is a constitutional amendment, given that we might still have to wait a little longer for the time when this country is finally run through decrees.

For, the speaker’s ruling will only bar the S-word from being used in the National Assembly. How will that prevent the rest of the country from committing the sin?

And sin we did, with headlines on news bulletins, and front pages of dailies, brimming over with the words ‘selected’ and ‘prime minister’ in the same sentence - often agonisingly adjacent to one another.

Another inexplicable phenomenon witnessed on the media was how certain journalists were seen reminding the ruling party’s leadership of all the derogatory words they had said in the past about their predecessors and against the very parliament whose sanctity they are currently using as the pretext for safeguarding the PM’s sacrosanctity.

Really? Questioning the current ruling party over its double standards? Might as well question the Pakistan cricket team why they are topping the dropped catches table at the World Cup or ask Humayun Saeed why he doesn’t choose age-appropriate roles.

What is especially embarrassing is that the media even in its current state isn’t in their control. It is the same media that cannot report on the biggest global terror group functioning in the country, an ethnic group launching nationwide protests for its rights, or when citizens go missing or killed. You know it’s bad, when ARY starts questioning your integrity.

In any case, passing the corresponding legislation would have covered all bases. Given that the constitution already safeguards abstract theories -- sometimes with the death penalty -- adding a theoretical head of government to the list of entities above critique would be a natural extrapolation.

The needed amendment would shield this individual from contempt, uphold their glory and safeguard their relations with friendly sugar manufacturers along with shielding them from allegations of indecency and immorality thrown up by ex-spouses.

As part of the legislation, the individual can also be deemed an institution, not only bringing him under the umbrella of the daunting euphemism hasaas idaara, but also making it convenient to slash unsubstantiated allegations of treason against his critics.

Imagine a scenario where someone criticises the chief of this civilian institution and the social media bots read the requisite keywords to process the algorithm that automatically generates the mass reply, pinpointing the sacrifices that a union council member makes to fix the irrigation system along the border of his census block.

"Easy to bark on Twitter, try going to the lines of irrigation and unclogging the drainage for a single day, you thankless ******** #PakistanZindabad #ILoveMyLocalGovt #ThankYouPMSharif #NumberOneIrrigation"

This, of course, is the ideal scenario, one which is all set to transpire if everything continues to work in accordance with the greater national interests and if the current leaderships of all idaaray remain on the same page of the book entitled ‘Totalitarianism for Dummies’. Indeed, George Orwell’s works would be a good choice as well. That way once the World Cup is over, we can all start looking for eerie similarities between 2019 and 1984.

But, what if things don’t go as scripted? What if there is a disagreement over the page number - or worse, the book title? What if that has already happened?

Why are the PM and his groupies reiterating that he did not attend Pakistan’s World Cup match against South Africa despite being invited to ‘save the taxpayers’ money’? Who else attended that particular match?

Is it a jibe against the chief selector who has come under severe criticism given Pakistan’s performance over the past year? Or was it the third umpire, who made contentious decisions despite hogging all the resources?

Indeed, the third umpire has the best view of the developments, and any bias on their part can have decisive impact. Similarly, where the players come under scrutiny for their performances, the selectors are also held accountable for their picks. In that scenario, the selector or the selected has to make way.

Perhaps that is the reason why the word ‘selected’ feels irksome after 10 long months of its relentless usage. Maybe the PM feels that he is selected no more. All of a sudden, ARY’s questionnaire makes perfect sense as well.