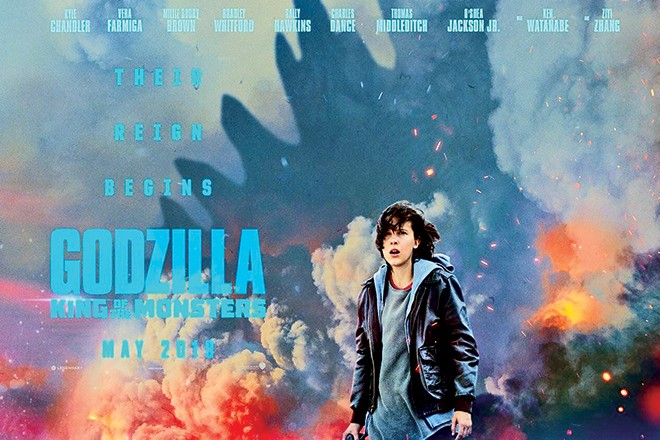 The sequel to the jolly green giant lizard’s 2014 reboot brings out Mothra, Rodan, Ghidorah -- and forgets to bring the fun; Guy Ritchie’s family-friendly, CG-enhanced live-action version of Disney’s animated hit surprises in all the right ways.

Godzilla: King of the Monsters**

Damn straight you want to go to the movies, shove popcorn in your face and watch giant creatures from a digital lagoon kick each other’s ass.  The title alone means most of us are in the tank for Godzilla: King of the Monsters. Besides the jolly green giant lizard, we get Mothra, Rodan, the three-headed Ghidorah,  a.k.a. Monster Zero and the barest hint of King Kong (we have to wait till next March to see Kong and Godzilla go head to head as part of Legendry studio’s MonsterVerse).

What does arrive in the sequel to the latest of countless, pointless reboots of the Godzilla franchise is a bloated and humorless script, lazy-ass directing from Michael Dougherty (who co-wrote the alleged dialogue with Zach Shields) and slumming actors who are forced to scream in terror when they’re not shoveling tons of mind-numbing exposition.  It’s weird that a series that began in 1954 with a low-budget Japanese quickie featuring a dude in a rubber suit came still survives as primo kaiju escapism.

The monsters -- called Titans -- eventually show up, and when they do they’re a fun crowd. Scary? Not really. But they’re still technical marvels. It’s a shame the plot mechanics don’t have a whit of the imagination the FX team brings to the party. And the titans don’t have any lines. How lucky can a monster get!

The story, such as it is: Dr. Emma Russell, a scientist played by Vera Farmiga as if what she’s saying actually makes sense (that’s acting!), has an invention called the Orca. It makes sounds that can communicate with monsters and hopefully control their behavior. Emma has less luck communicating with her teen daughter Madison (the wonderful Millie Bobby Brown from Stranger Things), who correctly thinks that her mom has gone bonkers. Madison is equally sad to have lost her brother in the battle that ended the last movie. But Mark (Kyle Chandler), her divorced dad, has it worse. He’s been drowning his sorrows in booze, but now returns to restore sense to the universe.

In short, the war comes down to those who believe humans should live in peace with the monsters (Ken Watanabe, Sally Hawkins), and those, represented by the villainous  eco-terrorist Colonel Jonah Alan (Charles Dance),  who want to blow the creatures off the face of the earth.

For fun and profit, of course. The movie globe-trots from Antarctica to Boston -- see: Ghidorah’s destruction of Fenway Park -- but rarely gets anywhere.

Do you care? Probably not. The chance to see giant monsters go apes**t -- a few more are added near the end -- is almost worth the price of admission. Seeing, however, is part of the problem. Godzilla: King of the Monsters is often so lost in the shadows of digital muck that it makes the squinting chaos of the Battle of Winterfell in Game of Thrones look like a lightshow. Still, when the Titans emerge from the sludge and go at it full tilt you may give in just to watch them let it rip. All that’s required is a mandatory suspension of critical judgment.

Did Aladdin just get woke? Looks like it. It’s an inspired choice to cast Guy Ritchie’s live-action version of Disney’s 1992 animated hit with persons of color. That’s Will Smith as the Genie, embodying the character Robin Williams brought to hilarious vocal life in 1992 and doing the role proud. Mena Massoud who plays Aladdin, has roots in Egypt. Naomi Scott, who plays Princess Jasmine, is of Indian descent. Nasim Pedrad, as her handmaiden, Dalia, was born in Iran. And Marwan Kenzari, as villainous Jafar, is partly Tunisian. An Arabian Nights fantasy filled with brown-skinned actors? Will wonders never cease?

That the movie itself is a treat, beyond its good intentions, is icing on the cake, though cliches and ethnic stereotyping still sneak in. Ritchie, best known for action pulverizers like RocknRolla and Lock, Stock and Two Smoking Barrels, doesn’t pull out the heavy ammo in this family-friendly, PG enterprise. But he does give the story a kineticism that helps when you’re trying to match what animation can do. That’s mostly a losing battle, but the impulse is solid.

The actors help enormously. Massoud, so good on TV’s Jack Ryan, is a live-wire as Aladdin, who swings through the streets of Agrabah like an acrobat while singing the Alan Menken/Howard Ashman-Tim Rice score. His ‘One Jump Ahead’ has a swirling energy you won’t find in the musical version currently on Broadway. Aladdin does have a problem: He yearns for Jasmine, a princess far beyond his pay grade. You won’t recognize Jasmine from her cartoon origins. She no longer dreams only of love; she’d like to succeed her father the sultan (Navid Negahban) and make decisions for her country. She even gets a new song, ‘Speechless’, with lyrics from La La Land Oscar winners Benj Pasek and Justin Paul. And Scott makes the most of it.

How do these two opposites come together? The Genie, of course. Smith plays him human-sized and later as the CG-enhanced marvel that pops out of a lamp when Aladdin gives it a rub. Genie has only three wishes to grant, and you can’t wish for more wishes. For starters, Aladdin wishes to be a prince worthy of wooing Jasmine. And Ritchie pulls out all the stops in "Prince Ali," a circus-like production number. Smith, however is the movie’s best special effect. He brings a Fresh Prince sass to the role and wisely never tries to imitate the inimitable Williams. Putting his own spin on Genie’s big song, ‘Friend Like Me’, Smith is a comic blast. His scenes with Massoud have a scrappy charge that lift the mood when the plot mechanics get heavy. And they do weigh things down at midpoint when Ritchie and co-screenwriter John August lose their spark to get care of franchise business. The romance angle works fine, especially when Aladdin and Jasmine ride a magic carpet (love that CG carpet) and duet on the Oscar-winning ‘A Whole New World’. But ginning up a love story for Genie and Jasmine’s maid seems like padding. And never once do you think that Jafar is evil enough to hold back a happy ending.

Still, every time Aladdin drifts into bland or the songs take on the static feeling of a Broadway musical that’s been running too long, Ritchie and the actors spring soaring, tumbling, freewheeling surprises that feed our rooting interest. Did we really need another live-action remake of a Disney classic? Maybe not. But what’s there goes down easy.