After the expected arrests of Asif Zardari and Hamza Shahbaz last week, will Maryam Nawaz and Bilawal Bhutto-Zardari be able to strategise an inclusive political future together? 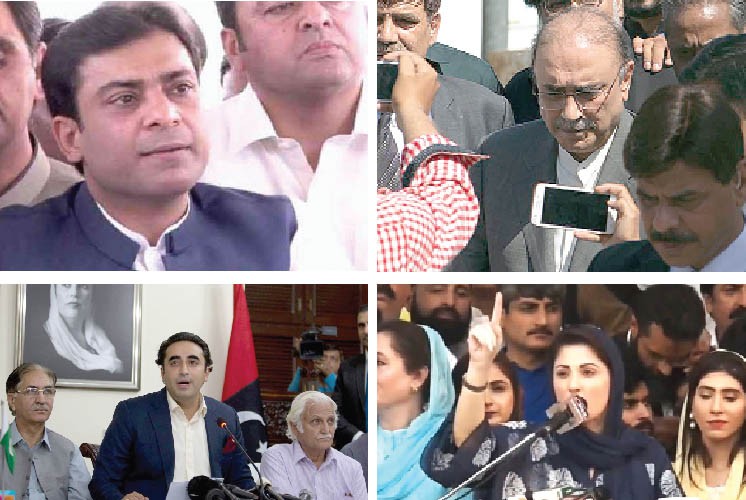 The Imran Khan government is close to completing its first year in power. Like any new government that achieves this milestone, it has gone through most of the stages any new regime faces. This includes setting out its goals and policies, its governance agenda, forming an implementation team, undertaking priority actions, producing its first budget and coming to be judged with more nuance about its ability to fulfil its election-time pledges by both its voters and its opponents.

It has arguably been the most turbulent first ten months in power by a government in Pakistan in recent memory, mostly characterised by incompetence, inconsistency and an inability to adequately plan and perform on its own agenda by the still-young government. The economy has grown progressively worse, governance has generally come undone and legislation has been a non-starter. For a party that promised ‘Big Reform’, little has improved on any front while a lot has simply become worse as the government’s own economic and governance performance indicates.

About the only thing consistent about Imran Khan and his ruling Pakistan Tehreek-i-Insaf (PTI) in this while has been the refrain about alleged ‘mega corruption’ during the tenures of the past two governments of Pakistan Muslim League-N (PML-N) and Pakistan People’s Party (PPP), which he explains is the reason behind the ‘U-turn governance’. The accountability drive against the previous rulers -- propagandised by the unrelenting shrill soundbite by cabinet ministers and often by the prime minister himself -- has dominated political and media discourse, partly masking the government’s failures.

In short, the opposition has been unable to translate the opportunities provided by a blundering government to give them a combined mission and make it harder for Imran Khan and his team to keep the focus of political and media narratives on the past governments rather than on his own government. This has partly helped keep the opposition pressurised into defensive postures and relatively disunited even though in sheer numbers in parliament this is the strongest opposition in Pakistani parliamentary history.

However, the momentum may shift significantly in the aftermath of Eid. The expected but shock arrests last week of former president Asif Zardari and leader of opposition in Punjab Assembly Hamza Shahbaz are sure to prompt their parties into closer engagement. They may pick up on some of the movement in that direction from an unprecedented meeting during the month of Ramzan between Bilawal and Maryam, along with other opposition groups, including Pashtun Tahafuz Movement legislators Ali Wazir and Mohsin Dawar.

The arrests and two aggressive addresses to the nation by the prime minister last week mean that the hitherto propaganda-focused ‘accountability drive’ has transformed into an existential political crisis for the aggrieved parties. This will change everything.

The protracted and immensely controversial accountability drive, the pet project of Imran, which remains unaffected by a recent scandal at the National Accountability Bureau (NAB), against the main leaders of PPP and PML-N, has now generated a critical mass of personal pain by the families of Zardari and Sharif after the latest arrests. The arrests and two aggressive addresses to the nation by the prime minister last week means that the hitherto propaganda-focused ‘accountability drive’ has transformed into an existential political crisis for the aggrieved parties. This will change everything.

Riding on the expected fallout of a deeply unpopular budget, it is expected the parliamentary opposition will form a broader coalition of resistance and ditch pragmatic opposition politics practised so far by Bilawal and Maryam. They will be tempted to the more traditional mode of street-focused opposition as espoused by Maulana Fazlur Rehman. Tweeting alone by Bilawal and Maryam will not move the government of Imran, who himself is no mean tweeter and therefore more than a match for his two main social media foes.

There are big decisions to be made by both sides of the political divide in Pakistan after the completion of the first year in the government and opposition after elections last summer. The decisions can be left pending and wither into ennui only at great peril to both sides.

The big decisions to make for the opposition are whether they have a combined mission or they should remain content with the currently comfortable silo politics; whether they want in-house change (new prime minister) or gun for mid-term elections; whether they want to strike a deal with the government and together stitch up a Charter of Economy and Political Stability around a legislative reform agenda on a give-and-take principle; whether they want to redefine politics by taking the Charter of Democracy further by proposing next generation of constitutional reforms, including intra-provincial devolution, protection of tenures of prime ministers and chief ministers and greater transparency of elections.

The big decisions for Imran Khan and his party are whether to continue their currently untenable politics of exclusion, polarisation and incendiary rhetoric or to de-escalate and embrace an inclusionary approach to parliamentary politics; whether to formalise what is clearly an increasingly presidential mode of governance through technocracy or to ditch political alienation among provinces even governed by his own party and strengthen parliamentary politics; whether to focus on rescuing the economy of regions he governs or pursuing accountability of those already out of power to the detriment of political stability; whether to continue distancing the government from parliamentary and electoral politics by continuing to outsource key policy decisions to external actors or instead to incentivise political continuity for the party beyond the current tenure.

The Imran Khan dispensation’s inability to focus on governance and fix a tanking economy and instead only expend a great amount of personal and official energy targeting the opposition parties for removal of their entire leaderships through a controversial accountability drive provides Bilawal and Maryam the perfect opportunity to reset Pakistan’s politics. Can they strategise together for an inclusive political future? We’ll soon know.