Balochistan, the most unexplored intriguing, and beautiful province of the country 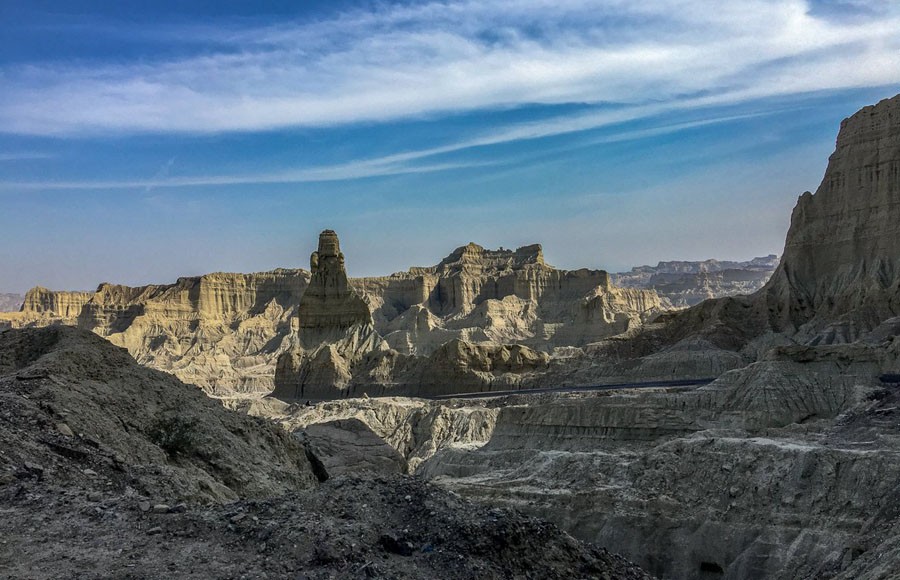 Balochistan has more to offer to the adventure seeker, the traveller and the mere tourist than the rest of the country put together. And that is a fact. Point.

In Balochistan, one can travel from natural beauty to historical sites to the finest pieces of subcontinental railway heritage. Here one discovers a land that has actually been undiscovered since time began.

Begin in the north to explore the chilghoza (pine nut, Pinus gerardiana) forest of Shinghar (Green Mountain, 3000 metres) in Zhob district where the British built one of their earliest sanatoriums in Balochistan. On the one hand, the beautiful, white-barked chilghoza pine and the bird life it harbours grabs the imagination of the naturalist, while on the other, the roofless hulks of the old abandoned buildings are the treat for the history buff.

Look eastward across the intervening valleys and some 30 kms away, the elongated massif of Takht-e-Suleman stretches north-south to rise to 3380 metres at its northern end to the peak that gives the mountain its name. Here too the naturalist will find a chilghoza forest, admittedly much sparser than the luxurious one on Shinghar.

The Takht is the trekker’s treat. Ideally setting out from Ahmadi Darga in Zhob district, one can attain the loggers’ camp before nightfall. Long before the sun rises in the morning the trekker can walk through the crags, past the pagan sacrificial altar now known as the grave of Qais Abdur Rashid, the fictitious progenitor of all Pathan tribes. Beyond lies the Takht from where, if one has been early enough, one can watch the distant horizon labour to deliver up a quivering sun.

Since one is in Zhob, one can follow what was once the longest Narrow Gauge railway line on its southwest alignment to Bostan Junction. And as one does that, one can get off the imaginary toy train (it has not run since 1986) at Qila Saifullah to meander through the grassland of Khaisor into Torghar (Black Mountain). Here again both the naturalist and the adventurer can revel in the offering.

For the former, Torghar is the home of the Suleman markhor. Once endangered and on the verge of extinction, it has made a dramatic comeback because of the remarkable effort of one man: Sardar Naseer Tareen. With a large population observable with binoculars from as close as three hundred metres, there are now several ageing males with trophy size horns that are offered for culling annually.

For the trekker, the possibilities are endless. From short daylong treks to several extending up to three days can be designed with the help of local game watchers. And as the trekker negotiates valleys and crags that have rarely known such adventurers they can be assured that from somewhere on a high, inaccessible crag a common leopard might be resting on a bellyful of markhor even as it keeps a watchful eye out for humans.

Back on the imaginary train, one must not fail to stop at Kan Mehtarzai. At 2224 metres above the sea, this beautiful little piece is the highest Narrow Gauge railway station in the subcontinent. Time was when station masters thrilled visitors with tales of blizzards sweeping across the land to cover up the track and leave those little toy trains snow-bound. However, the line was shut down in 1986, the station abandoned and the masters transferred elsewhere. Nature, as if to punish man for this mindlessness, stopped bringing down blizzards as it once did.

If Quetta has lost its beauty and salubrity to increasing population of humans and motor vehicles, it still keeps its place as the junction for some marvellous adventures. Here once can set out northwest to cross the Khwaja Amran Mountain to Chaman and the Afghan frontier. En route one can pause at Shelabagh and hear the tale of Sheila, the dancing girl brought here for the pleasure of the builders of the Shelabagh railway tunnel -- the longest in Pakistan.

Little will the unsuspecting tourist know that Sheila is the figment of a very fertile, if somewhat lewd, imagination of our times. That shela in Pashto is a mountain stream, one of many that watered a number of fruit orchards in the valley: Shelabagh.

In the other direction lies the famed Bolan Pass and the goose-bump raising railway line through it. But if one wants an anxiety-making railway journey, one must go north from Sibi into the gorge of the Nari River. Once a one-a-day train to Khost and back made this possible. Then in retaliation for one foolish dictatorial act of assassinating an ageing and unwell Nawab Akbar Khan Bugti, Baloch ‘insurgents’ destroyed the bridges on the line.

If Ziarat has long been flaunted as the biggest juniper forest in Pakistan, that has not been off the mark. With all its various dramatic rock formations and tangis (narrow passes); it is indeed a tourist’s haven.

If Ziarat has long been flaunted as the biggest juniper forest in Pakistan, that has not been off the mark. With all its various dramatic rock formations and tangis (narrow passes); it is indeed a tourist’s haven. However, south of Quetta, Kalat too has its own juniper mountains.

However, south of Quetta, Kalat too has its own juniper mountains. As the trekker heads that way, they pause near Manguchar to take the detour eastward to climb up the 3277-metre peak of Koh-e-Maran (Mountain of Snakes). It is worthwhile to explore whether or not the mountain is snake-infested. And as one makes the way up, one can perhaps count the number of Chiltan markhor that might be encountered in their retreat.

Kalat, the seat of the Nawab, still flaunts an art deco palace, truly a marvel of architecture from the 1930s. As one observes it from the front, one sees an ocean-going ship with the bonnet grill of an American car.

East of Kalat, Harboi (Many Fragrances) Mountain beckons. In the right season, wild thyme crushed underfoot fills the cool 2800 metre-high air with aroma that melds beautifully with the smell of juniper berries. On the peak sits a lovely little cottage, the personal retreat of the Khan of Kalat.

Not many miles away the entrance to Moola Valley entices. Horseshoe shaped, this well-watered valley connects the Kalat highlands with the lowlands of Gandava on one side and Larkana on the other. If one were to name the most enchanting place in all Balochistan. Two millenniums ago, this was the route that the Achaemenian kings used to enter Sindh to claim it as a satrapy. This was the same way that Alexander’s general Krateros led ten thousand retired veterans from Patala (Hyderabad) to their native Macedonia. Even as robbers despoil Moola’s historical treasures, there is a vast storehouse for the archaeologist and historian in the shape of cultural mounds and remains of ancient highways.

In Moola, too, lies the remarkable water world of Chorrrok and Chuttok. The narrow cleft in the limestone hills flowing with pure, clean water defies description. Millions of years of water running down the defile have eroded and polished the rocks to reveal breath-taking colours.

In Lasbela, the cave city of Sheher-e-Roghan is still mind-boggling. Nearly two hundred years ago, a British surveyor counted over eight hundred caves in the vertical verges of conglomerate. Today, there are about one-fourth, the rest having succumbed to natural erosion. These are no ordinary caves, however. Carefully carved into the walls they have a back room with a veranda in front. Soot-blackened lamp niches point to a very long period of occupation. Yet we know nothing of who built this cave city or why and when it was abandoned.

Lasbela is the ancient Armael, a very busy staging post on the much-frequented great highway through Kech to Mesopotamia. Kech (Turbat) with its 5500 year-old mound is a tantalising place. That is saying the least.

Heading northeast from Kech, the 1700 metre-high plateau of Panjgur is only a few hours away. Watered by the Rakhshan River, this lovely little town has orchards and orchards of dates and grapes. To my mind, this was the rich ‘inland district’ to which Alexander, while encamped at Kech, sent his quartermaster to procure food supplies.

Further south, along the newly-constructed Makran Coastal Highway, the spiritually inclined find solace in the caves and hollows of Sri Mata Hinglaj. If Hindus worship Durga here, Muslims celebrate Bibi Nani. Back on the new highway, one can reach Pasni and Gwadar, towns that hold great promise for the future.

If truth be told, this is not even a fraction of the story of Balochistan, the most intriguing, beautiful, unknown province of the country. But its tourism potential lies entirely untapped. If early governments after independence did not woo and win over the proud and hospitable Baloch people, the governments in the 1970s went grossly wrong. Then the immorality was capped by the elimination of a venerated, ageing and ill Nawab Akbar Bugti in 2006.

The simmering unrest burst out full-blown following the dastardly act. To make matters worse, masters of the security apparatus erroneously believe that force alone can subdue the turmoil. Consequently, in the last decade and a half, Balochistan has only bled. In that bleeding, it has drawn blood from the rest of the country.

If that truly unexplored province is to be opened up and its tourism potential -- which is vast beyond estimate -- is to be exploited, peace needs to be made with the so-called insurgents. I am no political scientist and have no cut and dried ideas on how that is to be executed, but surely, Pakistan has minds much greater than those ruling the security establishment. It is imperative that those minds be tapped.