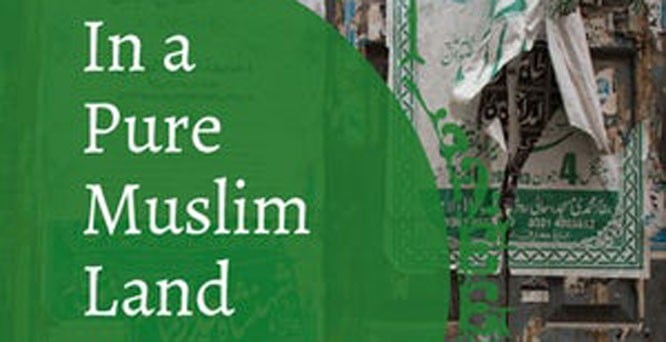 Simon Wolfgang Fuchs is a scholar who is a lecturer in Islamic and Middle East Studies at the University of Freiburg, Germany, and mainly focuses on global Islam, religious authority and Shi’ism. As a result of several years of research, Fuchs in his recently published book, In a Pure Muslim Land: Shi’ism between Pakistan and the Middle East, has made several innovative arguments that relate to the dimensions of Shia Islam in late colonial India and independent Pakistan.

Shia Muslims are 20 percent of Pakistan’s population, roughly 22 million, making it the second largest population outside of Iran. Fuchs writes that when most people think about Shia Muslims, they think of the Iranian revolution, but Pakistan is now home to an equally vibrant Shia political culture.

The book traces the humble beginning of Shias in today’s Pakistan with particular focus on Punjab, where not a single Shia seminary existed in 1915. But things changed after creation of Pakistan and particularly after the Iranian Revolution to the extent that till 2004, there were 374 Shia seminaries for male and 84 for female students in the country, with 218 and 55 respectively in Punjab province alone.

In the first chapter ‘All-India Shi’ism – Colonial Modernity and the Challenge of Pakistan’, Fuchs discusses activities of newly formed ‘All India Shia Conference’ (AISC) in the 1920s, Shia-Sunni tension particularly in Lucknow and the role of both prominent Shia and Sunni scholars and leaders in Muslim League and Jamiat Ulema-e- Hind, which was allied with the Congress, to bring a sort of harmony among both sects.

In colonial India between 1920s and 1940s, Sunni-Shia conflict increased. Sunnis started publicly holding ‘Madah Sahaba (praising the companions of Holy Prophet (Pbuh)) which at the time led to violence and riots particularly in Lucknow, which prompted the rulers to impose a ban on such rallies of Sunnis while hundreds of Shias were detained to prevent the situation from deteriorating further.

Second chapter of the book discusses ‘divergent views on tension’ of the ‘reformist’ and ‘rationalist’ Shia scholars after the creation of Pakistan on a host of issues ranging from Shia rituals to making efforts for supposed harmony with Sunnis.

In the third chapter, the author discusses what is called ‘peripheral status’ of Pakistani Shia scholars. This perceived ‘peripheral status’ of the scholars was probably due to lack of established educational institutions in Pakistan as only two seminaries existed in the country in 1947 in Multan and Sargodha respectively in contrast to pre-Partition Lucknow where seminaries produced ‘generations of senior Mujtahids’.

The author extensively used quotes from three Shia journals -- Al-Hujjat, Payam-e-Amal and Al-Muntazar, that were being published from Pakistan.

In the fourth chapter, the author talks about what he calls ‘Iranisation’ of Pakistani Shias in the wake of the Iranian Revolution in 1979. Growing political activism, the emergence of new leaders such as Allama Arif Hussain Al Hussaini, formation of the Imamia Students Organisation (ISO), rise of female activism, and what the author calls the ‘Lahore Project’ are some of the impacts of the Iranian Revolution in Pakistan.

Fuchs argues that ‘character of Shia activism’ existed in Pakistan even in the 1960s and 1970s but it gained momentum after the Iranian Revolution whose hallmark was a forceful Shia backlash in 1980 against a deduction of zakat from all bank accounts. This movement was led by Mufti Jafar. It ultimately led to what is called the Islamabad Agreement, according to which the Shias were free to administer internal affairs in keeping with their law. Next year, Mufti Jafar visited Iran to meet Khomeini.

Mentioning the ISOs’ role behind ‘enthusiastic organisational support’, ensuring protests across the country in the 1980s, the author opines that the Shia student outfit had emerged as ‘one of Iran’s most faithful ideological allies in the course of 1980s’.

After the assumption of leadership of the Tehrik-e-Nifaz-e-Fiqh-e-Jafaria (TNFJ), Al Hussaini tried to turn TNFJ from religious party to political organisation.

Besides, Al Hussaini who studied six years in Najaf held strong sentiments against Saudi Arabia and General Ziaul Haq’s military regime in Pakistan. Interestingly, he continued criticising both Saudi rulers and General Haq even at a time when Iran tried some sort of rapprochement with Saudi Arabia in the wake of Iran-Iraq war and had good ties with Pakistan. He was so much anti-Haq that he even did not welcome the then Iran’s president, Ali Khamenei when he visited Pakistan in 1986.

Another contribution of Al Hussaini was that he encouraged women activism and ‘conceded a much more comprehensive role to women.’

Regarding the ‘Lahore Project,’ the author discusses the role and thought of Sayyid Jawad Naqvi who spent ‘nearly his entire adult life in Iran’ and who had ‘uniquely Iran-centered career’ which distinguish him from others, such as Safdar Hussain Najafi and Al Hussaini.

In chapter five, the author discusses the Saudi connection of Sunni scholars, growing Sunni-Shia tension after the formation of banned SSP, causes of sectarian conflict and the reaction of Shias in detail. He particularly cites the role and thoughts of Ehsan Elahi Zaheer, a Pakistani theologian and anti-Shia sectarian who was killed during a bombing in 1987.

Curiously after returning to Pakistan, Zaheer initially joined a moderate party, Tehrik-e-Istiqlal led by Air Marshal Asghar Khan in 1972. He left the TI after Ziaul Haq’s coup in 1978 and started revamping the Ahl-e-Hadith organisation. Interestingly, despite having strong sentiments against Shias, Zaheer never touched the Iranian Revolution in his writings and did not consider the Iranian Revolution as a ‘political threat’ to Sunnis in Pakistan. Perhaps it was in this and another context that once Khomeini through a messenger invited Zaheer to visit Iran but he declined the offer reportedly because he feared for his safety. He did not criticise the politics of Iran. He also did not condone Iraq’s attack (during Iran-Iraq war) as a ‘necessary effort to contain the Iranian danger.’

Zaheer’s close links with the Saudi rulers and the scholars were visible from the fact that when he was injured in a bomb attack in Lahore in 1987, Crown Prince Fahd dispatched a private plane to transfer him to the military hospital in Riyadh. After his death, Ibn Baz led the funeral prayers and he was laid to rest in a grave close to the Prophet’s mosque in Medina.

Referring to different perceptions of various scholars about sectarian violence and the formation of SSP, such as local economic grievances, local politics in Jhang, and exposure of labour to Middle East who brought ‘redefined religious identity’, the author suggests that the violent animosities between Sunnis and Shias should be seen within the realm of politics.

He argued that the Iranian Revolution constituted a ‘crucial watershed’ for sectarian discourses in Pakistan but during this period, the SSP leaders/scholars also developed a longing for the ‘Sunni State’ which became a constant theme in their writings and lectures.

Shia groups reacted against the SSP both in intellectual and violent ways. It has been pointed out that between 1990 and 1997, 208 Sunnis and 289 Shias were killed during a total 1,112 sectarian incidents in Punjab province only, which also shows that Shias were perpetrators of violence too though there was little information available about their violent outfits and their leaders.