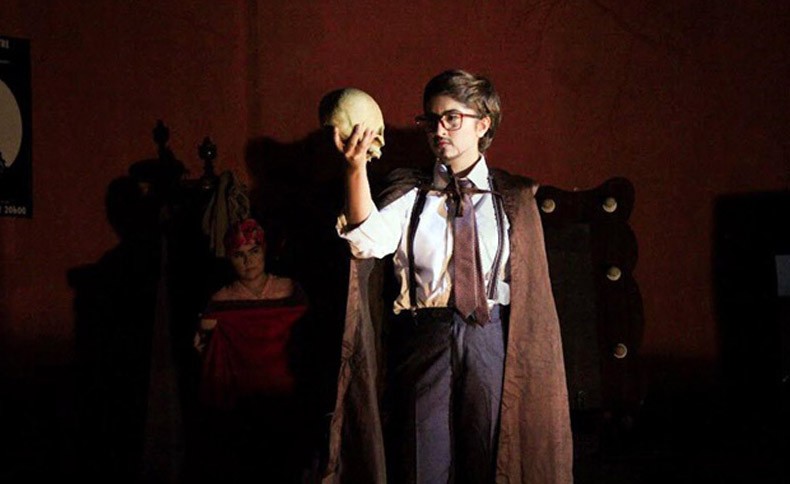 Darting exasperatedly about the stage, a performer apprehensively asks, "Who am I? What am I supposed to do? What exactly are my lines?" The audience is consumed with curiosity. That’s George Spelvin, the protagonist of 20th-century American absurdist playwright Christopher Durang’s noted drama, The Actor’s Nightmare. An adaptation of the play was performed recently by Kinnaird College’s Najmuddin Dramatic Society (NDS) at Hladia Hall.

Since its inception in the 1950s, the NDS has carved its own place on the amateur theatre scene of Lahore. The Actor’s Nightmare, which was staged for four consecutive days, was a treat to watch.

The play highlights the dilemma of an accountant, named George, who accidentally finds himself backstage and is mistaken for an understudy for an actor who just broke his legs. Forced on stage, George attempts to improvise his lines. His soliloquies as well as the situation he is in provide fodder for comedy, albeit of absurdist nature.

Theatre as an art form seeks to engage the audience, encouraging contemplation on human behaviours. There is pathos as well as humour in the plight of the baffled George, especially as he asks the stage manager, "What play are we doing?" Eventually, The Actor’s Nightmare is not just about an unprepared actor on stage.

Watching the play was akin to travelling through different eras of literary history, as references from Shakespeare’s Hamlet, Becket’s Waiting for Godot, and Noël Coward’s Private Lives are especially interwoven in the dialogues. Chief success of the production ultimately lay in the fact that it had the audience hooked till the end. Credit is due to Dr Nadia Anjum who directed the play together with Ms Bushra Andrabi and Durre Najaf Hussain, President, NDS, for making the play a success.

Essayed brilliantly by Aqsa Asif, a senior student of English Literature at KC, George’s quivering posturing resonated well with the audience who could identify themselves with his unpreparedness and his existentialist ponderings. During the course of the play, George’s rendition of ‘Que Sera Sera’ (what will be, will be) stands out as a sort of a consolatory avowal for the audience of refusing to bow down despite all difficulties of the task at hand. The scene where he breaks into the "To be or not to be" soliloquy is delightful, as George can’t seem to recall the exact lines and jumbles up phrases from Hamlet and Twelfth Night as well as Private Lives. Asif left the audience in fits with her flawless comic timing.

Another equally powerful act was by Aimen Zahra who transited fluidly between the roles of King Lear, Othello, and one of Macbeth’s witches in the performance. She used her voice to deliver a pitch-perfect performance. Besides, Anum Naseer as Eleen and Natasha Faisal as Sara Siddons also acquitted themselves well.

Durang’s plays are significantly high-energy. The NDS managed to attain that level of vigour through the characters of Young and Old Gobos, played respectively by Arooba Ali and Kinza Rashid. Bustling across the stage, the Gobos with their quirky wit made an endearing watch. Besides, Minahil Noor as the director in the play left an impact.

Live singing by Keziah Austin and a well-choreographed dance added to the dramatic elements of the performance. The costumes were also well deliberated upon -- be it George’s guise as Shakespeare’s Hamlet in a black robe, or the floral gowns worn by Sara Siddons, or the yellow construction hats sported by the young Bob builders who measured the size of coffin box with a little tape.

The stage set was organised by Dr David and the Fine Arts department. The walls covered with posters from the plays George was supposed to perform lines from, proved to be a clever prop.