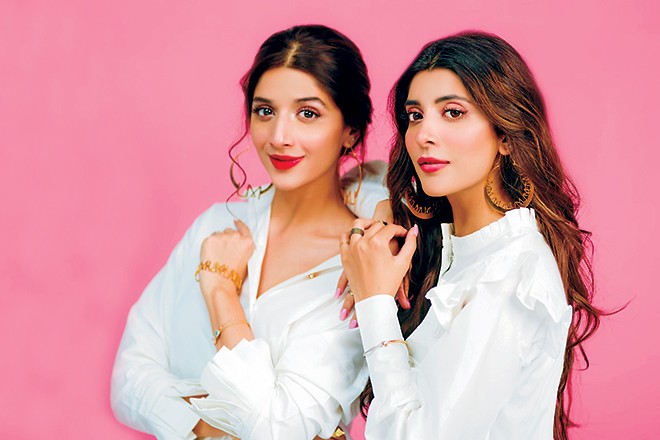 It’s the 21st century where stars are powerhouses fuelled by various energies. Here’s where the dynamic Urwa and Mawra Hocane comein with their very own clothing line, designed after their personal style and building their brand even further.

What would you say Beyonce, Rihanna, Jay Z, Kanye West, Jessica Simpson, Kate Hudson, Reese Witherspoon and many more international stars have in common with Urwa and Mawra Hocane, other than growing acting or singing careers and insane social media following? They all decided – many of them years ago - that they wanted to channel their inner style, usually seen on red carpets, into something more sustainable. Hence began the big ‘celebrity X clothing line’ collaborations. You guess it right. Urwa and Mawra Hocane have just raised the curtain on their own clothing line, christened UXM, and it channels their youthful energy as well as every fan’s aspiration to be like them.

I sat down with the girls to discuss this exciting new venture, which from the looks of it did not appear to be a flash in the pan. While several celebrities in Pakistan have attempted to bring out clothing lines, many of them have fizzled out in the pilot stage. But the Hocane sisters, I learnt as we chatted, were too invested and involved in this professionally to take it lightly. An idea that started brewing in their heads two years ago, the girls got down to the task and started working on the infrastructure around eight months ago; today they have an organized set up in Lahore with dedicated teams in place. The logo, an abstract take on the acronym, has various meanings others than its abbreviation and the sizing, labeling and packaging is all looking super savvy. Yes, we did get a preview!

But what is UXM all about, I asked?

I was intrigued at this sudden turn their careers were taking. It’s not like they’re taking a break from the entertainment industry. Mawra these days is working on her next drama serial, which will follow Aangan in which she portrays the ethereal Aaliya. Urwa, having picked up awards for her role as Durdana in Punjab Nahin Jaungi last year, is now producing her first feature film, Tich Button starring Farhan Saeed, Feroze Khan, Sonya Hussyn and Iman Aly. There’s nothing else in the pipeline at the moment but what inspired them to go off on a tangent and get into this?

"UXM is basically something that is very close to us," Urwa started talking about the venture. "I feel that it completely describes who we are and what we like to wear and how we like to style ourselves. We have tried to put that into our designs so that people who follow us or who like to dress up like us, can probably make use of it."

Instep: What genre did UXM clothing fall into, though? Would it be predominantly eastern, western or fusion?

Mawra: It is western and fusion but it is going to branch out from here. So, it is not like we have put a full stop on it. We will keep going in every direction we possibly can.

Urwa: Yeah, we’ll keep branching out; we have also worked on some jewellery pieces that are fun and funky.

Mawra:  We are working on everything we can think of under the sun; anything which is possible to create in a consumer friendly cost and something we can sell in Pakistan. We don’t want to be foolish about it - we are making what we want to wear but we are also making what people can wear and buy. UXM is basically an extension of our personalities. So many people are selling clothes but they are never enough. We have created an extension of ourselves for those who love us and love what we wear or maybe they will start loving what we wear. So we are trying to put it all out there.

It’s interesting that Mawra should talk about people who may "start loving" what they wear because the Hocane sisters may be red carpet darlings and dominate the spotlight every time they step out but they are also, often, heavily criticised for their sartorial choices.

"We get all kinds of feedback but honestly, we prefer to experiment with what we wear," Mawra replied. "It would be the easiest thing in the world to get a blow dry and dress safely but where’s the fun in that? We want to take risks."

"Plus, we almost never get criticised for our everyday looks," Urwa pointed out.

Instep: You both definitely are fashion friendly and love styling yourselves but tell me more about the UXM style – are there shirts, blouses, trousers, skirts, shalwar kameez… what is it about?

Mawra: The brand’s tagline is ‘Girls Who Can’ (an obvious pun on their name). It is going to have a lot of life to it. And once we come out with the brand you will know why we have this tagline…

Urwa: But the tagline itself has a meaning that we are the girls ‘who can’. The way we have designed the campaign, teasers and digital campaign it is about girls who can dream, who can achieve - who are go getters.

The very first UXM line, Mawra elaborated, will launch online next month and is called ‘White Wash’. It’s a summer line made on a white palette, which will have a tinge of colour here and there.

"The collection further divides into two types of clothes - one that represents Urwa and the other that is more me," Mawra added.

The line will have a blend of T-shirts and an emphasis on smart, comfortable clothes using good quality fabric.

Fabric selection was a big deal for the two, Mawra shared.

"We have really worked on the fabric because for us to not be able to buy anything and wait for our international trips and getting T-shirts from Zara etc was getting a little frustrating in the last few years," she said. "We are making what we’d wear. It starts from T-shirts but we are also making denim and office friendly cotton shirts made from beautiful, feel good material - material has been our key component."

Targeting younger girls, the UXM brand will definitely play strong on the coolness factor. What helps more is that it won’t be adding more printed tunics to an already saturated market but will be offering the kind of ready to wear options that are not so easily available, especially for the average urban girl. UXM will be initially available on online (making the label instantly accessible to all), will be available in all sizes and will be priced at an affordable price.

"It will be something that a teenager or an office going girl would be able to afford," confirmed Urwa. "It won’t be like you bought this one piece of clothing that hangs in your wardrobe like a souvenir."

Instep: Star power may attract people to your brand once but unless they really love what they get, they won’t come back. So what is UXM’s USP? The power that will bring people back, again and again?

Mawra: Firstly, comfort. It is comfort fabric. I am big on fabric. I wear something and I feel it to see if I want to buy it or not. So that feeling is very important and we’ll cater to that feeling. Then we are catering to the affordability and we’ll give you trendy stuff that we ourselves would like to buy. There is trend, there is affordability and there is comfort. Feel good is the key.

Instep: Celebrities all over the world get into clothing lines but most of them just collaborate with established labels; when they want to fly solo, they have investors. Have you two self-financed this?

Mawra: We were offered a couple times to, let’s say, endorse a lawn brand, which makes a hell lot of money, but we didn’t want to use our names and come out with something that is not us. If you want to strictly be yourself, then you have to self-invest.

Urwa: So basically we are financing UXM ourselves and I feel the benefit of it is that we don’t have any pressure on us. We are taking our own decisions. When other people are involved you know there is a certain deadline, an expectation to deliver in a certain time, to report profits. So I think we have been able to put quality into the process this way.

Mawra: We have taken it slowly; we’ve taken it with love. It is not a business deal. It is just me and her.

The ‘me and her’ is Mawra and Urwa, or rather Urwa and Mawra (as abbreviated in the label) and they both bring their individual strengths to the table. Talking to them, it is quite obvious that Mawra will be the one talking about the brand whereas Urwa is the one with a head for numbers. Mawra is the one who may panic every now and then, but then she’ll have Urwa to level it out. Both the girls have their own distinct styles that work with key words like feminine, trendy, casual and comfortable. They both have incredible energy and this is the USP that UXM will work with. For them it’s less of a business and more of a passion project; they’re delighted to be putting a creative part of their personalities out there. And most of all, they’re delighted to be doing this together, this being their first professional collaboration.

"We just hope it goes well. It is very close to our heart," said Urwa, with a hint of excitement and anxiety in her voice.

"We are enjoying it and we hope people would like it as well," Mawra echoed in.

UXM definitely does look like something to look forward to!