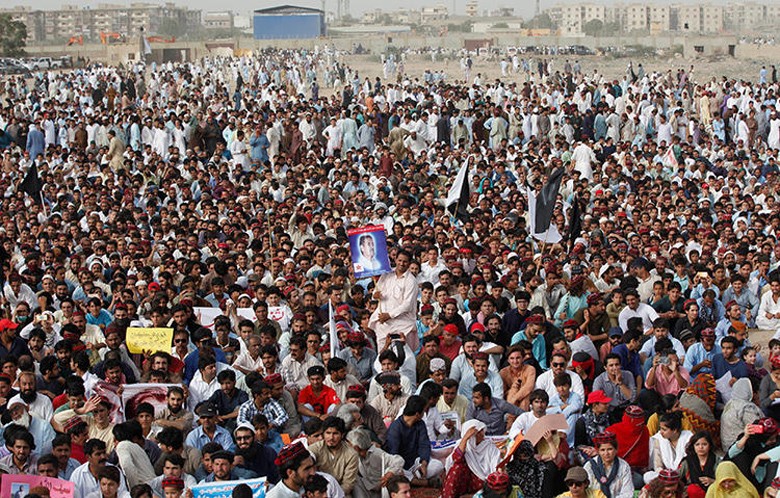 It couldn’t have been nastier. On 26 May, thirteen people were killed and 45 others were injured when security personnel opened fire on protesters in Khar Qamar area of North Waziristan tribal district, about 210km south of provincial capital Peshawar. According to the official narrative, protesters were armed and opened fire on a security check post and killed a soldier. These protesters had gathered to protest the detention of two facilitators of an attacker who, on May 6, killed a soldier in the area, the official story went.

On the other hand, Mohsin Dawar stated to Al Jazeera that it was a local protest and he, as a representative of his people, wanted to ascertain facts about the incident. The moment he along with his people attempted to cross the check post so as to meet with protesters on the other side, security personnel opened fire. From the state side, crossing the check post was a provocation.

Almost all news channels and newspapers carried the news of two MNAs leading a procession of people and attacking a security check post. Except for the PTI no other political party bought the story line of the state. The amateur videos that were widely shared on Facebook and Twitter showed that shots were fired the moment people started crossing the checkpost. I couldn’t find any footage which showed any protester wielding a gun.

Unfortunately, in the chequered history of Pakistani politics, dissent against the state’s priorities has invariably been equated with disloyalty to the state. During initial years after independence, anyone who disagreed with Muslim League was labeled either as an Indian agent or against Islam. In Pakistan, a person or a political party that peacefully challenged the priorities of ruling elites or a specific dominant institution at a given times was decried as Indian agents or anti-state. Bengalese were always seen unreasonably as Indian fifth column inside Pakistan. Likewise, during the hugely controversial presidential elections in 1965 when Miss Fatima Jinnah, Quaid-i-Azam’s sister, stood against Ayub Khan, he accused her of supporting Bacha Khan for an independent Pakhtunistan. This list of traitors has swelled over time.

One may question someone’s patriotic credentials if she/he opts for secession. Manzoor Pashteen, PTM’s head, seeks solution to Pashtun woes within the constitutional framework of the Pakistani federation. That is what he has been consistently asking for. Similarly, MNA Mohsin Dawar supported erstwhile Fata’s merger with Khyber Pakhtunkhwa. He was by then an officeholder of ANP, which supported the merger option. After he was removed from ANP because of his association with PTM, Dawar won from NA-48 (North Waziristan Agency Tribal Area-IX) as an independent candidate. In May, National Assembly unanimously passed the 26th Constitutional Amendment Bill which sanctioned 12 and 24 seats for tribal districts in the National Assembly and provincial assembly of Khyber Pakhtunkhwa, respectively. Interestingly, MNA Mohsin Dawar was one of the two movers of the constitution bill. How can an integrationist be anti-state!

The state has deep reservation regarding PTM’s lar-o-bar yaw Afghan (People of low and highlands are one Afghan) slogan. To the ruling clique, this slogan envisions the spectre of a possible merger of Pashtuns across both sides of the Durand Line in a ‘Greater Afghanistan’. Two points are important. First, the slogan is a manifestation of same nationhood in terms of common language, culture and traditions, history etc. This slogan does not challenge the existing territorial arrangement.

PTM has done quite the opposite of that by participating in parliamentary politics and peaceful protests around the country. Secondly, PTM is a conglomerate of diverse people. Like in any movement and political party, it is quite possible that a few people, those on the fringes in PTM may dream of a so-called ‘Greater Afghanistan.’ These people cannot be a real threat until they are supported by the vast majority of Pashtuns. The more relevantquestion is when is the lar-o-bar slogan raised?

Pashtun nationalists raise the slogan every time they feel aggrieved. Pashtuns from former Fata have suffered immensely. These are primarily Pashtuns from Khyber Pakhtunkhwa in general, and the tribal districts in particular who account for the vast majority of more than sixty thousand plus countrymen who have been killed in the Pakistani chapter of war and terror. They were displaced internally in countless military operations. Seen with suspicion, they have been killed extra judicially. They have gone missing. Their fields were swarmed with landmines that keep maiming people for life. Within their own districts tribesmen are mishandled during intermittent curfews and are searched at check posts. They are demanding accountability for their sufferings.

Also read: Daring the writ of the state

What unites PTM’s otherwise competing interests is the heavy-handed response of the state. PTM has a huge following from amongst political parties including but not confined to PkMAP, ANP, PTI, JUI and the Pashtun intelligentsia. Post Khar Qamar incident, even ANP, which had otherwise shunned the PTM spoke up for it.

So, what should be done? Incremental fashion is the way forward. First, the state should end harassment, torture and the use of force. Secondly, stop branding PTM as anti-state. Third, PTM’s uncontroversial and least controversial demands such as demining Waziristan, lifting curfews and reducing number of check posts should be heard. Fourth, on the count of missing persons and accountability for ‘war crimes’, PTM leadership should be engaged in negotiations. Let negotiation take its natural course.