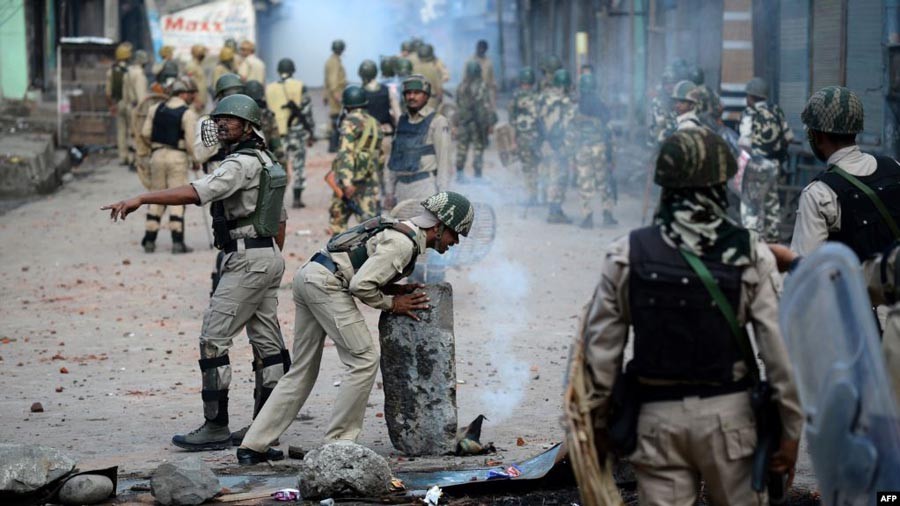 A recently released 560-page report on human rights situation in India-held Kashmir reveals that torture is deliberately being used by the state forces as an instrument to repress the resistance struggle. The report has grabbed significant international attention.

The report jointly published by the Association of Parents of Disappeared Persons and the Jammu Kashmir Coalition of Civil Society exposes the unholy nexus between judiciary and law enforcing agencies in committing rights violations without fear of accountability. It says that torture is used as a matter of policy by the Indian state in Jammu and Kashmir, exercising it through all the institutions of the state -- legislature, executive, judiciary and armed forces.

The report thoroughly examines the state of human rights abuses, specifically 432-cases of torture since 1990 in the India-held Jammu and Kashmir. The momentous report provides insights about the use of physical and mental torture as a tool to subdue the dissenting voices in Kashmir for decades.

It is clearly the first-ever report of its kind that presents perturbing and worrying evidence, in specific cases of alleged brutal torture such as electrocution, water boarding and even sexual torture of the civilians.

The report documented dozens of cases of extrajudicial killings, murders, extortions including stripping the detainees naked, beating them with sticks, iron rods or leather belts, roller treatment, water boarding, electrocution including of genitals, hanging from the ceiling, mostly upside down, burning of the body with hot objects, solitary confinement, sleep deprivation, sexual torture including rape and sodomy by the state apparatus.

Sadly, the report acknowledges that due to legal, political and moral impunity extended to the armed forces, not a single prosecution has taken place in any case of human rights violations in Jammu and Kashmir. It also points out that the major victim of state repression, almost 70 percent, have nothing to do with the violent groups. They are common citizens including women, students and juveniles, political activists, human rights activists and journalists.

Entire populations have also been subjected to collective punishments like cordoning an area and search operations during which torture and sexual violence are common practices. Ironically, survivors and released prisoners have to face lifelong psychological problems. Torture survivors say though the physical wounds heal over time, the scars it leaves on the soul remain there forever.

The report documented dozens of cases of extrajudicial killings, murders, extortions including stripping the detainees naked, beating them with sticks, iron rods or leather belts, roller treatment, water boarding, electrocution including of genitals, hanging from the ceiling, mostly upside down, burning of the body with hot objects, solitary confinement, sleep deprivation, sexual torture including rape and sodomy by the state apparatus.

Thirty-six of the 432 torture victims (and their families) studied live in abject poverty as a result of loss of livelihood or death of the family breadwinner due to torture. Of these 36 families, members of four families died as a result of torture.

Since last year, India’s violation of human rights in Kashmir, particularly endless cycle of torture and ill-treatment has come under global scrutiny. Geneva-based Human Rights Council (HRC) has been criticising excessive use of force since 1990 when popular uprising erupted in the Kashmir valley. However, last year in June, the UN High Commissioner for Human Rights (UNHCR) came up with a first-ever report on Jammu and Kashmir, including Azad Kashmir and Gilgit-Baltistan. Interestingly, it called for the establishment of an international body such as the Commission of Inquiry to conduct an independent international investigation of human rights conditions in Kashmir.

The recent report of Kashmiri organisation also echoes the UNHCR report and recommends an international investigation into torture in Kashmir, led by UN Office of the High Commissioner for Human Rights, besides urging India to ratify the UN Convention Against Torture and end the phenomenon of torture.

The sane voices in India also suggest New Delhi to engage with Kashmiris in order to deal with the present situation, and shun the policy of arms twisting and bullying the resistance movement. The Hindu’s editorial while commenting on the report suggests: "The government must press for due process and justice in each of these. Eventually, India will be judged not only by how close it stands to the world’s most powerful countries, but how much the state extends itself to the most vulnerable within its own boundaries."

These indigenous reports are the tip of the iceberg. It might play a role in awakening empathy for the people of Kashmir who are embattled in an unending conflict for over seven decades.

Juan E. Mendez, former UN Special Rapporteur on Torture and presently Professor of Washington College of Law, wrote the report’s introduction which is widely cited by the international media. He characterised the report as an outstanding example of a human rights organisation’s endeavour to bring the facts to the world. "It will serve as a model for other civil society organisations in India and in other countries, for its dispassionate and precise language, even when discussing tremendously tragic suffering," he maintains.