In Ratodero, Sindh the worry of having HIV-positive children is leaving parents gutted 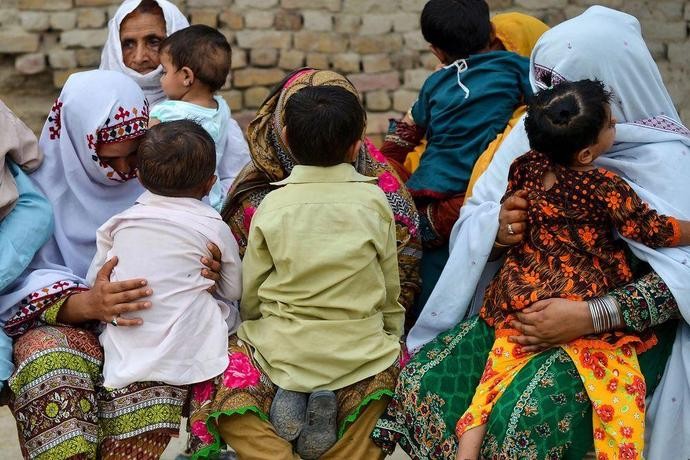 More than 600 people -- 75 percent of them children -- have tested positive for HIV in Ratodero, a town in Sindh province, and "The numbers will increase since screenings are still underway," warns Sikandar Ali Memon, the head of the Sindh AIDS Control Programme (SACP).

A grandmother had brought her 14-month grandson to the Ratodero camp to get him started on his second dose of HIV treatment after the infant was tested positive over two weeks back. For the last six months, the infant’s father had been taking his son to every private clinic in Ratodero and Larkana but his fever refused to break. And then alongside high fever, the little one continued to suffer from a spate of runny stools. "The child was 9km at 6 months. Today, at 14 months, he weighs not more than 8kg," laments the grandmother.

When the various coloured "syrup" prescribed by local doctors failed to make his child well again, one doctor suggested he get the son tested for HIV. "The test came positive," says the father. He then took his son to get a second one, the "bara wala" (big one) test at Larkana which confirmed his HIV positive status. "It was as if the sky had fallen!" was how he felt when he was given the news.

Father of a six-year old girl felt the same. "The news was like a death knell for us. My wife didn’t eat for three days," he says. She has not been given any drug yet only tested positive. The doctor told him she has the virus but it has not become apparent and she may suffer from side effects if they administer a drug into her.

A pall of gloom looms over the other family with the son. He attributes the child’s illness to "Allah ka azaab" (God’s wrath). His entire family has been tested negative.

Dr Naseem Salahuddin, infectious disease specialist is concerned with the growing number of children testing positive. "We are finding a whole generation of teeny tiny babies infected from HIV," she says, terming it the "worst calamity" in the history of global HIV/AIDS programme. "Never have we seen such numbers being reported," she adds.

The world over HIV numbers are going down but "in Pakistan these have shot through the sky," she laments. With 20,000 new HIV infections in 2017 alone, Pakistan has the second fastest growing HIV epidemic across Asia, according to the UN.

Memon says the investigations being carried out point towards reused blades that barbers use to cut newborn’s hair, reused syringes and needles during vaccination as well as contaminated and unscreened blood transfusions.

According to Dr Salahuddin, the babies testing positive were already malnourished and most had already contracted typhoid, malaria, dengue, TB etc. Holding the entire health ministry and its "lax system" responsible for the "horrific calamity", she says, "It’s too late. I don’t know what will happen to these already sick and weak babies".

The SACP head Memon says the investigations being carried out point towards reused blades barbers use to cut the newborn’s hair, reused syringes and needles during vaccination; contaminated and unscreened blood transfused to kids suffering from thalassemia, and infection passed on from HIV positive mother to her newborn child. "But the biggest culprit of all is the reused syringe," he adds.

The government has started a crackdown on unlicensed, informal medical practioners. "We have taken very serious notice and got 160 of nearly 270 clinics in Larkana sealed amid much pressure and threats from all quarters." Officials estimate that about 600,000 unqualified doctors are unlawfully operating in Pakistan, 270,000 of them in Sindh.

The important question to ask is, why are babies falling victims to this menace? "My mother shaved his head at home for his aqiqa and she used a brand new blade; and we have not done his sunnat (circumcision) yet," says the befuddled father of the son.

"Whenever she has been given a shot, I’ve ensured I’ve bought a new syringe and needle from the medical store," says the father of the girl.

Because the kids are being tested positive and not parents, Memon says, stigma associated with HIV/AIDS has been lifted. "I am relieved our investigation did not point towards unsafe sex because then most people would not have come forward. Now people are coming voluntarily to get themselves tested".

"I don’t think I need to keep my child’s illness a secret, if I do she will not get the treatment she needs," says the girl’s father. All the 12 members of his family have been tested negative.

To Dr Salahuddin, it is time to talk about the unnecessary use of injections, the importance of destroying the needle and the syringe after use. "One unit of contaminated blood means billions of bugs getting into your body!"

In addition, she says, the Sindh government needs to procure "tonnes of ARVs [antiretroviral] from the National Aids Control Programme for the kids and the adults" and begin training the doctors and mothers on its administration. "We need to train doctors in HIV designated clinics set up by the government as they get stumped and don’t know what do if there is a complication -- like when an HIV patient comes with an opportunistic infection or what to do when a patient complains of side effects of the drug etc."

For now, more than how the children got this virus, all that the parents want to know is whether it is a curable disease. "Nobody is giving me the answer," says the father of the infant boy. "This worry is eating me up."