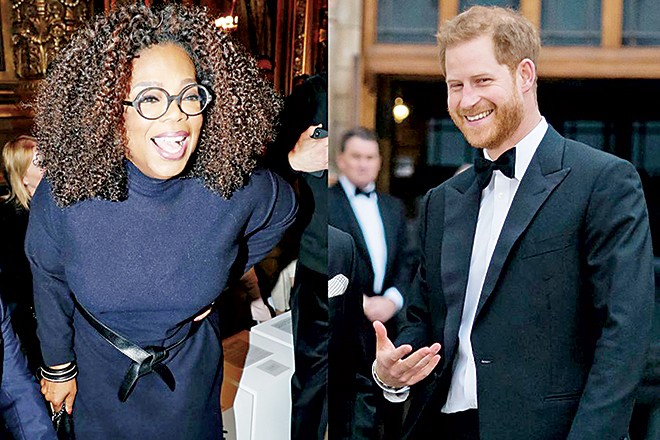 As Apple continues to build out the prolific but mysterious programming slate for its new streaming venture, Apple TV+, Oprah Winfrey just handed the company its latest, greatest coup: a team-up with none other than Prince Harry.

[Last week], the Duke of Sussex announced - fittingly, via his new joint Instagram account with Meghan Markle - that he and Lady O are collaborating on a new docuseries focused on mental health and wellness, due out in 2020.

"We are excited to announce that The Duke of Sussex and Oprah Winfrey are partners, co-creators and executive producers on their forthcoming mental health series launching on Apple in 2020," the announcement states. "The pair have been developing the series for several months and are looking forward to sharing such an important project on this global platform." The series aspires to "[inspire] viewers to have an honest conversation about the challenges each of us faces, and how to equip ourselves with the tools to not simply survive, but to thrive."

As the announcement notes, mental-health advocacy has long been an important cause for Prince Harry, as well as Prince William and Kate Middleton. Prince Harry has been candid about his own experience with therapy and grief ,following the tragic and sudden death of his mother, Princess Diana.

As the statement puts it, "His Royal Highness (HRH) has spent many years working with communities throughout the UK and young people across the Commonwealth to break the stigma surrounding mental illness and broaden the conversation of mental wellness to accelerate change for a more compassionate, connected and positive society."

Added Prince Harry himself, "I truly believe that good mental health - mental fitness - is the key to powerful leadership, productive communities and a purpose-driven self. It is a huge responsibility to get this right as we bring you the facts, the science and the awareness of a subject that is so relevant during these times. Our hope is that this series will be positive, enlightening and inclusive - sharing global stories of unparalleled human spirit fighting back from the darkest places, and the opportunity for us to understand ourselves and those around us better. I am incredibly proud to be working alongside Oprah on this vital series."

Winfrey, who attended Prince Harry’s wedding to Meghan last year and was particularly inspired by the event, naturally made sure to reply to the new show’s announcement: "Delighted to be partnering with you," she commented on Instagram. "Hope we shed a lot of Light. And change some lives!"

Although Apple’s TV offerings will include plenty of big names - including Reese Witherspoon, Octavia Spencer, Jennifer Aniston, J.J. Abrams, Steven Spielberg, Sofia Coppola, and plenty more - its multi-year partnership with Winfrey is indisputably its biggest "get." She was also by far the most dynamic presence at the company’s big TV event in March, where she promised content that would help bring people together. "The Apple platform allows me to do what I do in a whole new way," Winfrey said at the time. "They’re in a billion pockets, y’all. A billion pockets." And now Prince Harry will be, too.